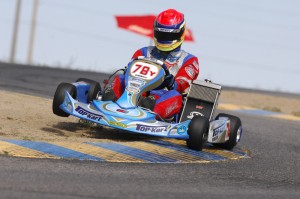 Heading to Grand Junction, Colorado for rounds 3 and 4 of the SKUSA Pro Tour series, held at the Grand Junction Motor Speedway, the Austin Elliott Racing team looked to redeem themselves after an unfavorable weekend in rounds 1 and 2 at the Mussleman Honda Circuit in Tucson, Arizona.  Official practice on Friday went well, setting the fastest lap time of the day in the last practice session by just a couple hundredths of a second.

Much preparation was put into testing for these two days of racing and that proved to pay off when Saturday qualifying came up and the California driver posted a time that would be good enough to put his P1 powered Top Kart fourth to start the opening race.  Heat one started with the loss of one position after getting ran up on from behind going into the first corner.  Four laps into the eight lap heat race, Austin passed into second place but was denied shortly after when his engine’s spark plug wire disconnected from the boot, seizing all engine power and ending his heat race early.  Being placed in the tail of the field in 36th, Austin would make an incredible run up to 13th in the short eight laps he was given.  Still on the adrenalin rush of the heat 2 excitement, he was ready for the main event.  The 18 lap main proved to be just as successful making a drive through the rest of the field, finishing 3rd and setting fast lap of the race.

With the right adjustments, the Austin Elliott racing team was ready to hit the track again Sunday morning for race #4.  Lap after lap in qualifying, he proved to be fast once again, putting his Top Kart near the front in third place.  Heat one saw an uncontested drive to second place as third and further back battled on.  Heat two opened up with Austin passing into the lead for a short while.  Battles continued at the front with Austin finishing in second.  Starting on the front row, the drop of the green flag signaled the start of the main event.  Dropping to third early in the race, he had a little catching up to do.  The trigger was pulled for second and held until the final few laps of the 18 lap race when the position was taken away once again until the checkered flag flew.  Unfortunately, his third place finish would be taken away by the race director after a two position penalty was given for passing under a yellow flag. “I was disappointed when I learned a penalty was given to me for a crash on the other side of the track, affecting my finishing position”, explained Austin. “But I am still happy with my results of third and fifth place finishes for the weekend at a race of this caliber.  I couldn’t have done it without my supporters and sponsors”.

Austin would like to thank his mom for her continued support, Wesley Boswell for his tuning and coaching, Grand Products and Top Kart USA for his Top Kart chassis and racing support, P1 Engines for the best power and track support, the SKUSA staff for a great racing experience, Grand Junction Motor Speedway, and all of his family and friends that support him.

For more information on Austin’s racing team and sponsors, please visit www.austinelliottracing.com.  For information on joining the sponsorship team to help Austin attend the next racing event, please email austinelliott78@comcast.net or call him at 530-391-6421.  Thank you.