A challenging win for Arie 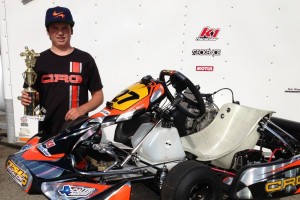 With challenging conditions Arie Zimmermann was able to pull through for his first victory in Junior Rotax on the high speed Grande circuit at CalSpeed Kart Track in FontanaCalifornia.

This was Arie’s first race at the fast counter clockwise version of the Grande circuit and one which would prove more challenging with changing weather conditions. With much anticipation and nervousness, Arie would take to the track for the first time with a very different setup then what he has become accustomed to. The set up on the kart and the unfamiliar track configuration did not slow him down. Arie would qualify outside pole for the main event.

As race time approached, the threatening clouds off in the distance now began to thunder overhead. Rain began to fall from the sky as Arie was beginning his preparations for his race. Shortly before pre-grid, the event was officially called a Rain Race and thus rain tires were allowed. However, as Arie was suited up in his K1 RaceGear protective gear, the rain stopped and the sun broke through. The team quickly pushed the kart back to the pits and changed the wets to slicks in anticipation of a fast drying track. “When I saw my team rush the kart back to the tent to change tires, I honestly felt a little disappointed as I was really looking forward to running on rain tires,” Arie said.

Arie would quickly get over his disappointment and lead the field to the green. After a few laps in tricky, mostly wet, but drying conditions, Arie slowly increased his lead as the track and conditions “came to him.” It turns out the last minute change to slicks was the correct call. Arie would end up winning his first Junior Rotax race at CalSpeed.

Arie Zimmermann will be a high school freshman this year with an aim to earn an engineering degree. Has been karting for eight years and is looking to step up into the top ranks of karting in the U.S. Arie has sponsorship opportunities available. Arie is currently being supported by K1 RaceGear, CRG USA, Seckence Surf Boards and Apparel, Wild Donkey Clothing, and Motul. To find out more about Arie please like him on Facebook at www.Facebook.com/ArieZimmermann