First and third for Bray in Colorado 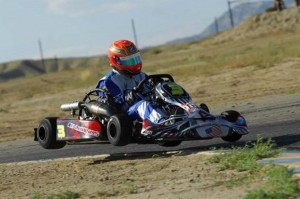 Kiwi karter Daniel Bray has followed up his Saturday win with a third place finish in Sunday’s race at the latest round of the SuperKarts USA Pro Tour at Grand Junction Motor Speedway in Colorado.

Though series points will not be available until later this week the result looks set to lift the 26-year-old Kiwi from fourth to third or even second place in the S1 Pro Stock Moto class standings.

After their debut 2013 win in the new Aluminos-branded/GP Karts-built kart on Saturday Bray and his team had high hopes for a repeat on Sunday.

When the Kiwi found himself back in third place behind long-time rivals Fritz Leesmann and Joey Wimsett in the warm-up then only able to set the sixth quickest lap time in qualifying they realised, however, that they had some work to do.

“We’re only talking tenths (of a second),” said Bray, ” but instead of us being tenths in front like on Saturday we were tenths behind. Part of it was set-up in that the track had changed quite a bit – in terms of the amount of rubber that was down – from Saturday and part of it was me.

“I didn’t really hydrate enough on Saturday – it was 40 degrees Celsius and the humidity was off the radar when the Final was on and it was hard to keep up with the fluid you lost – and I think I was feeling the effects of that in the warm-up and I just didn’t manage to get a good lap in in qualifying.”

Despite that Bray worked his way from sixth to third place in the first heat then started and finished third in both the second heat and the Final, in each case crossing the finish line behind defending series class title holder and 2013 series class points leader Fritz Leesmann and Tony Kart ace Billy Musgrave.

Having endured two promising but ultimately fruitless forays to Europe this year Bray says Saturday’s win in the US was a real confidence-booster.

“It was just one of those days where we managed to tick every box, and to be honest with you one of the reasons we found ourselves a wee bit behind the eight-ball on Sunday was that the kart was so good we didn’t want to change it!”

Bray is now on his way back home to New Zealand but only long enough to contest the next round of the local Rotax Max Challenge. It is in mid August and immediately afterwards he will be back on an aeroplane to Europe where he will contest the CIK-FIA International KZ2 Super Cup meeting at Varennes in France over the September 21/22 weekend for the GP Karts team.