Racing Resumes for Los Angeles Karting Championship After Month Off

After a full month off, Los Angeles Karting Championship racers returned to CalSpeed Karting Complex this past weekend  (July 14) for the sixth round of the 2013 season. The LAKC continues to see impressively high entry numbers month in and month out, and round six was no exception. LAKC President Chris LaTorre commented on how the weekend went very smoothly and extremely happy with how the 2013 season is going. The club is seeing not only high entries, but great racing every round of the season.

Despite traveling to Colorado to compete in the Superkarts! USA SummerNationals the following week (July 19-21) many of the SoCal teams who have competed in the LAKC all year made sure to make it to Fontana for round six. Among those teams that are pulling back to back race weekends across the country Musgrave Racing was at round six, before heading to Colorado. In 2WildKarting.com S2 Semi-Pro Stock Honda, Billy Musgrave continued his domination of the 2013 season. Billy swept the day by grabbing the pole in qualifying nearly half a second ahead of Don Whittington. The pre-final saw Musgrave lead the way with Whittington running second, and Augie Lerch behind in third. Musgrave led early on in the main event with Whittington hanging close behind. On lap 10, Whittington made his move and took the lead from Musgrave to start lap 11. Whittington would lead the next four laps, however, it would be Musgrave who would take the white flag as the leader. Musgrave led the final lap and scored the win extending his point lead in S2.

As always, sharing the track with S2 were the Stock Honda Masters S4 drivers presented by Musgrave Racing Company. Willy Musgrave beat Erik Jackson out for the pole position by two tenths of a second. After getting a great start in the pre-final, Musgrave ran third overall getting around S2 racer Augie Lerch. After letting Lerch by, Musgrave fell to Jackson on the second lap of the pre-final as Jackson drove to the win. The main was all Musgrave though. Jackson fell to Musgrave at the start and could not reclaim the top spot. Ron Rossetti would get around Jackson to finish in second with Jackson settling for third. 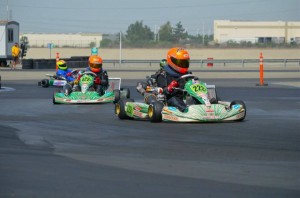 Kevin Gilroy scored a perfect day in the Acceleration Kart Racing S4 Magnum class. Gilroy beat out Marc Segal for the pole in qualifying. Gilroy then beat Segal again in the pre-final by four seconds earning him the number one starting spot in the final. Gilroy led the way the entire way in the 16-lap final as he scored the round six win. Behind Gilroy was Segal and Harris Koening.

In the TM Racing USA Open 125 Shifter class Salva Prikhodko started Sunday off as best as possible by beating Alex King for the pole. Unfortunately that was as good as Prikhodko’s day would go. After completing only one lap in the pre-final Prikhodko would record a DNF. Rob Whitley ran to the win in the pre-final ahead of Alex King while Prikhodko tried to find the cure for his ailing kart. The cure was not found in the main, as Prikhodko again completed only one lap before retiring. At the front it was King leading for the first seven laps before Whitley got around King and drove to the victory by one second. Jesse Romer finished in third in Open Shifter after an up and down day which included driving from the 12th spot on the grid to finish sixth in the pre-final.

Coming into the July race weekend, Alejandro Fernandez and Carlee Taylor rolled into CalSpeed Karting Complex tied for the lead in the Buddy Rice Karting TaG Senior class. Sunday, Fernandez made his case as to why he should be atop the point standings by sweeping the day, qualifying through the main event. Fernandez edged out Juan Jimenez by five one thousandths of a second in qualifying as he earned the pole. John Wallace III led the opening lap before relinquishing the lead back to Fernandez for the remainder of the eight lap pre-final. Despite a clean sweep on the day, the box score for Fernandez would not show how difficult the main event would be. Fernandez led the first lap before co-point leader Taylor got in the mix. Taylor led the next three laps. Then it was Jimenez’s turn at the top as he led the majority of the main event. After plenty of back and forth racing with Taylor for the second spot, Fernandez stepped up and got around Jimenez with three to go. Fernandez picked up the main event win over Jimenez and Taylor.

Mark Polunin was on his way to a perfect day in the Hyper Racing Engines PRD Junior 1 class. Polunin scored the pole over Johnny Dressler and then out ran Dressler in the pre-final. In the final, Polunin fell from the top three on the track early. Dressler led the opening ten laps before Myles Farhan led the eleventh lap. Polunin climbed back to second on lap 12 but could never get back into the lead. Farhan got around Dressler on the final lap and won the main event over Dressler while Polunin finished in third place after being dominant most of the day. Ryan Schartau was able to complete the sweep on the day in the Fleming Racing Engines KPV 1 class as he led all the laps in both the pre-final as well as the final. Behind Schartau was Dante Yu in second, while Trey Brown competed the podium. 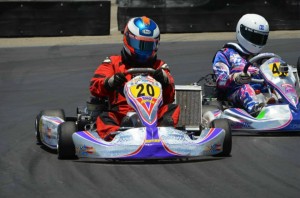 The PureKarting.com Comer Kid Kart class was kicked off with Cole Keith Cotham grabbing the pole over Jake Daniele. Despite running to the finish of the pre-final in second, pole sitter Cotham was disqualified after a fuel sample from his kart failed post race tech inspection. Chance Gibson won the pre-final with Dominic Gorden finishing in second. Gibson went on to win the main event in Comer Kid Kart, beating out Gorden as he did in the pre-final. Cotham drove from the back of the pack after his DQ to finish in third. Daniele and Trey Eggleston completed to top five. Sharing the track with the Comer Kid Karts were the Honda Performance Development Kid Karts. Kasey Gillis came in to the weekend second in the points trailing Jaden Goetz by three points. Gillis led all but one lap in the pre-final and scored the win and the pole heading into the main event. Gillis led green-to-checker as Gillis scored the main event win over Jaden Goetz and Noah Warren. Maxi Saga and Jalen Mack rounded out the top five.

Karlee Polon swept the day in the Mike Manning Karting PRD Senior Pilot class Sunday as she scored the pole, pre-final and main event win. Polon led every lap of the heat race, while Michel Manning raced with Wetterau for the second spot on the grid. Wetterau would get around Manning at the halfway point in order to finish second. The main event was a carbon copy of the pre-final as Polon led all 16 laps en route to the main event win. Michel Manning completed less then one lap before retiring from the final, leaving Wetterau to inherit second place. Connor Funk filled out the podium in PRD Senior Pilot. Elric Navatel beat out Steven Novikoff for the win in the Valley Trophy Rotax Senior Pilot class.

Paul Bonilla entered the weekend trailing John Bush by only four points in the championship standings in the PhilGieblerRacing.com class. Bonilla went to work on Sunday to cut into Bush’s slim point lead. Bonilla started the day off by grabbing the pole ahead of Ron Rossetti. Bonilla proceeded to lead every lap in the pre-final on his way to a near four second win over Rossetti. The main event was dominated by Bonilla as he drove to an over nine second win ahead of Rossetti who stayed ahead of Kevin Manning for the first half of the race. Finishing the race in third behind Bonilla and Rossetti was Sean Brazeau who drove from fifth place on the grid.

Dante Yu had a very strong weekend in the OTK Kart USA TaG Cadet class. After qualifying second to Dick Ka Po Yu by less than two tenths of a second, Dante drove to the pre-final win after passing Dick at the halfway point. Dick unfortunately would fall as far as eighth in the pre-final before finishing in seventh. Dante went on to lead every lap of the main event handing him the win. Meanwhile, making a very impressive run for the tenth starting spot on the grid, Ryan Schartau drove all the way to third by the third lap. Lap four Schartau made his move around Anthony Willis for second. Schartau would finish the main event in second, ahead of Jonathan Shone in third place. 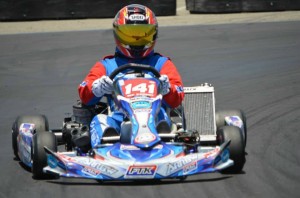 On the track next would be the combined classes of the MACK Motorsports PRD Junior 2 class, and the Empire Karts KPV 2 class. In the Empire Karts PRD Junior 2 class, Skylar Estrada edged out Willy Axton by four one hundredths of a second for the pole. Axton got the jump on Estrada at the flag, as he led the first lap. Estrada would get around Axton before lap two and continued to lead until the end picking up the pre-final win over Axton and Hannah Grisham who steadily worked her way up from fifth place. The main event did not go as smooth for Estrada as the earlier parts of the day had. Estrad fell from the lead to fourth on the opening lap as Nick Ramierez took the lead for the first three laps. While Estrada worked his way from the back, Grisham took her turn at the front leading laps four through seven. Ramirez took the lead back on lap eight, before Estrada reclaimed his spot atop the field. Estrada led the last seven laps, and won the main event. Finishing behind him in second was Dylan Cartier with Nicky Hays finishing in third. The KPV 2 raceway was swept by Andrew Murowatz. Beating out Jonathan Eshom by three tenths of a second gave Murowatz the pole. From there Murowatz went on to lead every lap in both the pre-final as well as the main event. Behind Murowatz was Eshom and Bryce Murphy filling out the podium.

The RLV PRD Senior class rolled out on to the track next. Things got started by Robby Stanovich grabbing the pole by five one hundredths of a second over Lloyd Mack. In the pre-final, Mack got around Stanovich at the flag and led every lap in order to score the win heading into the main event. Mack got off to a good start in the main, leading the first seven laps. Paul Bonilla took the lead on lap 8 and held it for the next four laps. With four laps to go, Mack took back the lead and drove to the win. Eric Molinatti and Brenden Baker completed the PRD Senior podium.

The final class of the day was the Pitts Performance Junior 1 category. Ryan Schartau was on pace to sweep the day, after grabbing the pole and pre-final win over Trey Brown, and Colin Queen. The main event saw Joseph Daniele drove from fifth place, steadily gaining positions until taking the lead on the final lap from Schartau. Daniele won the main event ahead of Schartau and Johnny Dressler.

As the LAKC continues to see excellent racing while maintaining incredibly strong entry numbers week in and week out the series racers take a break until August 11. For more information, be sure to visit www.lakc.org today and follow them on Facebook/lakc.org for race day photos and up-to-date information.