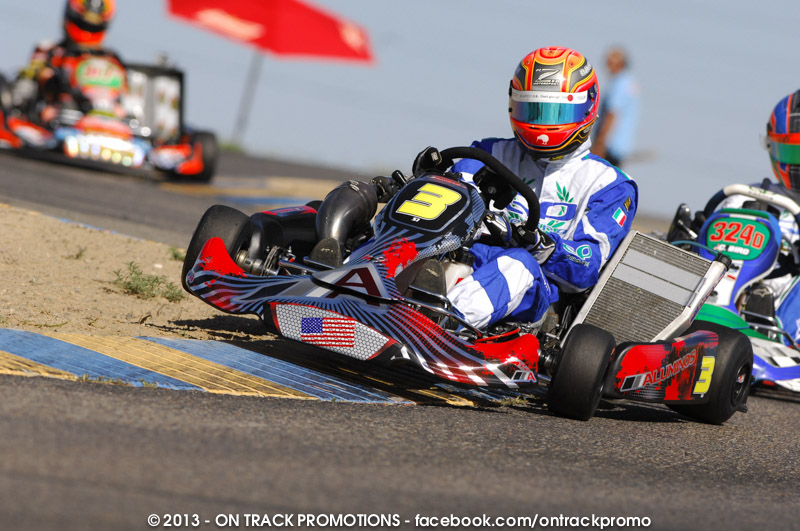 Kiwi Daniel Bray ended the day as quick driver in S1, marking a solid debut for the new Aluminos chassis

The opening day of the Superkarts! USA Pro Tour SummerNationals can be described by two words – hot and sticky. Over 200 drivers took part in the practice day at the Grand Junction Motor Speedway, battling to keep cool while finding the right speed secrets for competition on the weekend. The facility and paddock is packed with haulers and tents, and the SKUSA staff continues to provide the one of the best run-programs on the weekend. 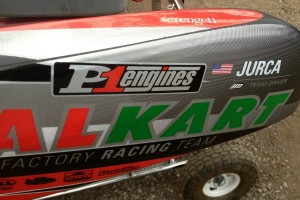 – During the middle portion of the day during the S4 Master Stock Moto practice, a collision between Lance Lane and PP Mastro occurred. The hard contact knocked both drivers off track, causing heavy damage to Lane’s DRT Racing/DR Kart. Mastro was able to continue on the rest of the day while Lane complained of back pain, later traveling to the medical center in town for a check-up.

– Among the new drivers at this weekend’s event are a couple veterans – Nick Neri (FA Kart) and David Jurca (Italkart). Neri is the defending S2 Semi-Pro Stock Moto SuperNationals winner and multi-time Rotax champion. Jurca is a SuperNationals winner as well – TaG Senior in 2004 – and multi-time shifterkart champion. As expected, both drivers are among the top-10 in the final session of the day.

– This weekend marks the debut of the new Aluminos chassis, designed by the Northern California operation. Kiwi driver Daniel Bray is piloting the new chassis – manufactured by G.P. Karts – in the S1 Pro Stock Moto division. All the components on the chassis are stamped with the Aluminos A, and the black color makes it look mean and fast. The new graphic design by driver Carlos Calderon make the package that much more unique and flashy. 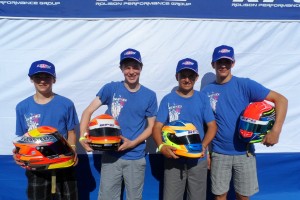 – Throwing back to the old SKUSA ProMoto Tour days, Memo Gidley is guide two drivers this weekend under the Muscle Milk/Pickett Karting team. Daniel Langon is representing the team in S1 Pro Stock Moto with Hunter Pickett in S2 Semi-Pro Stock Moto. The rides look stellar and both will be among the contenders here this weekend.

– The results on-track has shown the Rolison Performance Group is the operation to groom and develop drivers. The Junior roster they have now has become a power house with four strong pilots. Luke Selliken and McKay Snow were joined by Blaine Rocha late last year, and now the team welcomes current Pro Tour point leader Austin Versteeg to stable. The four drivers are among the top young guns in the country, and all are working and learning together under the RPG tent.

– Another first for the weekend is SKUSA SK-1 Stock Moto pipe making its Pro Tour debut. A number of drivers are utilizing the Pro Circuit Racing Inc. manufactured pipe – which will become the sole exhaust system allowed for Superkarts! USA competition in 2014, backed up by a warranty never heard of in the sport. 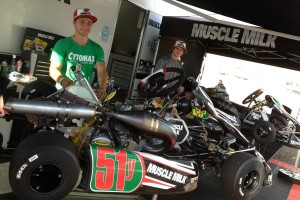 On-track, the top drivers in the Pro categories were Bray and Austin Elliott. Bray, Joey Wimsett (CRG), championship leader Fritz Leesmann (CRG) and Tyler Bennett (Tony Kart) were within nine hundredths of a second in the final practice session, setting up for what could be an exciting qualifying session in the morning. Four drivers were within a tenth of a second in TaG Senior as well, with Elliott (Top Kart) at the top. Brazilian and 2010 SuperNats winner Andre Nicastro (Italkart) was second in the order followed by ART GP driver Jake Craig and SKUSA #2 plate-holder Remo Ruscitti (Italkart). Championship leader and double SpringNats winner Andrew Zimmer (ART GP) was 12th in the order. Engine wise, 98% of the field began the day with the Leopard engine and stuck with it.

Ryan Kinnear was fast two weeks ago for the Rocky Mountain ProKart Challenge, and continues to show the way in S2 Semi-Pro Stock Moto. His fast time aboard the Champion Racing/Intrepid entry was two tenths clear of the field. Championship leader Garrett Boone (Birel) was 13th in the order. Similar in S4 Master Stock Moto where Brian Fisher (DR Kart) swept the Rocky Mountain PKC weekend and is at the top of the charts at the end of the day by two tenths. Double SpringNats winner Jordon Musser (Birel) is 12th. TaG Master saw another monster lap secure the top spot with point leader Scott Falcone (Arrow) posting the fast lap of the final session. Piloting one of the few Rotax-powered entries in the field, he was quicker than the two Russell Karting/Parolin drivers of Jim Russell Jr. and Chuck Gafrarar with former champs Brian McHattie (Exprit) and Paul Bonilla, making a move to the Italkart for the weekend. 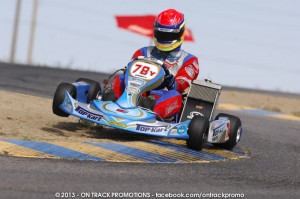 The S5 Junior Stock Moto division continues to grow, becoming more and more competitive with each Pro Tour event. Defending champ Jim McKinney (KGB) was tops in the final run of the day, followed by Mexican driver Raul Guzman (GP) and SpringNats winners Jarred Campbell (Intrepid) and Carter Williams (FA Kart). Round one winner Blaine Rocha (Kosmic) posted the fast lap in the final session for TaG Junior. The top-10 was all within a half-second of each other, including point leader Austin Versteeg (Kosmic) in third. Sting Ray Robb (Tony Kart) topped the time sheet in TaG Cadet, featuring 35 drivers and racing for another $1,000 purse on the weekend. Robb was a full eight tenths quicker with his fast lap, leaving the rest of the field to do their homework overnight. Championship leader Chase Farley (Energy) was back in the 16th spot in what is going to be a very competitive weekend in the category.

EKN Trackside Live continues Saturday morning at 9:20am MDT with qualifying. Live audio and timing can be viewed at www.eknclassic.com/live with updates posted to the Official Discussion Thread, Facebook, Twitter and photos on Instagram.