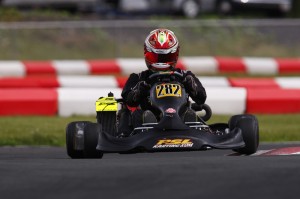 Taking to the Karting Grand-Mère facility, just north of the team’s headquarters in Rivières, Quebec, Team PSL Karting would score multiple victories and podiums in the final event at the circuit. With Karting Grand-Mère closing its doors after this past weekend’s third round of the 2013 Coupe du Quebec series, Team PSL Karting drivers Gavin Reichelt, Dany St-Hilaire and Francis Methot became a few of the last drivers to win a race at the 1km facility in their respective classes. Team PSL Karting and CRG were also represented on the podium four additional times, as the combination continues to be a leader in Canadian karting action.

The combined DD2/DD2 Masters category would see PSL drivers come away with both victories. Francis Methot would battle two other Team PSL Karting drivers in the DD2 class all weekend, as Alessandro Bizzotto and Dominic Legrand each took a heat race win while Methot claimed third in both. Bizzotto then nabbed the prefinal victory ahead of his teammate Methot with Legrand back in third. As the fastest driver on track in both the prefinal and final, Methot was then able to score the main event win with Bizzotto and Legrand making it an all-PSL podium. In DD2 Masters action, Dany St-Hilaire would complete the sweep of the over-32 category, again putting PSL on top of the podium while fellow competitor Francois Bellemare finished sixth on the day.

Team PSL Karting’s third win came via American pilot Gavin Reichelt. Running overweight in the Rotax Junior class, Reichelt clocked second in the first heat before posting a DNF in the second. Starting the prefinal based on the average of his two heat results, the rising star drove to third and posted the fastest race lap. When all was said and done in the day’s final, Reichelt drove to victory and officially became the last driver to win at Grand-Mère.

“Gavin drove a fantastic race, making calculated moves,” noted PSL Karting’s Team Manager Andrew Campbell. “His European driving style often can be intimidating to the other drivers who are not used to hard racing. I really believe this is a big advantage for him.”

Also representing the CRG chassis brand in Rotax Junior was Team ACM pilot Christophe Paquet. Working with ACM team owner Alex Louet, Paquet was at the top of the time sheets all weekend posting heat results of third and second. Taking the win in the prefinal, Paquet placed second in the final behind Reichelt to add to his win from round two. 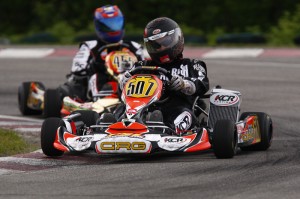 Three Team PSL Karting pilots would take on the competitive Rotax Senior ranks, with the PSL/CRG package continuing to show strength in the class. A familiar face under the PSL tent, Nathan Kelly put PSL on the podium once again with a strong second place effort while newer team recruit Marc-Andre Levesque also represented PSL on the podium after finishing third in the final. Johnny Flute added a solid seventh place result to complete the team’s Senior campaign in Grand-Mère.

“Our three senior drivers showed progressive pace from Friday, proving the CRG consistency and adaptability in the hot conditions,” added PSL Karting’s President, Dominic Labrecque. “Despite not being able to come away with the win, it was still a great effort from the entire team.”

In Rotax Mini Max, rising talent Thierry Cote started his third round action as the fastest driver in Friday and Saturday’s practice sessions. Posting third in the first heat and the fastest lap of the race, Cote then went on to place fourth in the second heat as well as the prefinal. Settling for fifth in the final, Cote will look to top the blocks when the Coupe du Quebec series resumes during the Monaco de Rivières street race on August 3.

Completing the Team PSL Karting driver line-up, Mathieu Demers was the quickest pilot in the 4-stroke Briggs category. Posting fast time in qualifying to take the pole position, Demers steered the RS-5 CRG chassis to fourth place results in both the prefinal and final in the stout field of 31 competitors.

Team PSL Karting will next host the Monaco de Trois-Rivières August 1-4. Team drivers will tackle the challenging street circuit at the site of the GP3R for round four of the Coupe du Quebec series on Saturday, August 3 and round three of the Eastern Canadian Karting Championship (ECKC) to follow on Sunday, August 4.