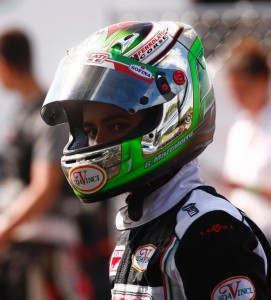 Gianfranco Mazzaferro, a member of the Ferrolati Corse Karting Team, recently completed an outstanding weekend of head-to-head racing action as he drove his way forward to grab two podium finishes and put himself right the Eastern Canadian Karting Championship title hunt. The stellar results now put GF in third place in the championship standings after heading into the weekend in eight spot. As his main title rivals faltered, GF put on a passing clinic making the most of his weekend. Both days ran under sunny skies with GF taking second place in the Saturday final and backing that up with third in the Sunday following a storming drive up through the field. With two rounds remaining, both in his home province of Quebec, GF is now in right back in the title fight just one point out of second place.

“Goodwood was a strong weekend for sure,” smiles Mazzaferro. “We didn’t show a lot speed in practice, but we were quick when it counted. If we can improve qualifying I think we can look to take a win before the season is out. The most important part was taking advantage of the points when some of the other guys ran into trouble.”

Saturday would see GF qualify in the fifth spot ahead of the all-important prefinal. In the prefinal, the talented teen took second position to sit on the front row for the final. Working the outside front row GF was able to hold station in the intense final, grabbing the second step on the podium. Sunday was another strong result for Mazzaferro and tuner Nick Cosco as they went fourth quickest in timed qualifying. A poor start in the prefinal resulted in a ninth place finish and a challenging starting spot for the Sunday final. A heads up run would see GF charge back through the field as he chased down the lead group. Pushing to the end, the rookie driver capitalized as the leaders went off and other drivers faded. At the line it was nice recovery to third place and second podium on the weekend.

“I really like where we are going into the final two rounds of the year,” continues Mazzaferro. “Both are in Quebec and are one off weekends at tracks I really like. It’s going to take wins to take the championship title, but I think we have a really good shot.”

ECKC is up next on August 4th at Trois Rivieres followed by the final round at Mont Tremblant Karting in mid-September. Before the ECKC hits the track next, GF will make a return to Euro Max Challenge action as he heads to England for round three of highly acclaimed international series. The race takes place at PF International Kart Circuit located two hours north of London in the Lincolnshire region. Action gets underway on July 17 to 21st.