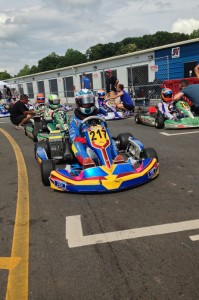 Making their Grand Nationals debut at the upcoming Rotax Max Challenge United States Grand Nationals, 37RacingEngines is already beginning to turn the heads of members of the karting industry. With a driver lineup that consists of the likes of championship-caliber drivers Neil Verhagen, Jack Weprin, Louie Pagano and Daniel Formal, the newly formed company will have their sights set high as they look to achieve national titles and Team USA berths to the Rotax Max Challenge Grand Finals later this year.

“37RacingEngines is a company that has been formed by my dad and myself,” explained Daniel Formal. “Focusing on the Rotax market, we are working to provide drivers with the best engine packages available and help them achieve their goals. We are very excited as we move forward in this new venture and look to take the karting community by storm.”

Already showing their speed, Rotax Junior standout Jack Weprin would utilize 37RacingEngines power at the recent GoPro Summer Shootout. Taking place at the same Mooresville, North Carolina facility that the upcoming Grand Nationals will be held, Weprin flexed his muscles and showed his speed by scoring a second place result Saturday, a dominant victory on Sunday and a pair of pole positions.

Formal continued, “Weprin, along with 37RacingEngines, was the class of the field in Rotax Junior. He proved to be fast in pre-event testing as he was unofficially the fastest lap holder and that continued into the weekend.”

Back to the track Sunday morning, 37RacingEngines and Weprin would have a dominant day. Taking the pole position, prefinal win and main event victory, the duo would lead every single circuit on Sunday to top the blocks and make a statement that they will be a threat for the national championship in two weeks time.

Heading to the Rotax Max Challenge United States Grand Nationals, a quartet of drivers will race under the 37RacingEngines banner. Returning to make his assault in Rotax Junior will be class frontrunner Jack Weprin while multi-time Team USA member Louie Pagano will enter the Rotax Senior ranks. Neil Verhagen will fly the 37RacingEngines colors in the ultra-competitive Rotax Mini Max ranks in his hopes to claim a national title. After claiming national titles in Rotax Mini Max, Junior Max and Senior Max throughout his career, Daniel Formal will throw his name into the Rotax DD2 mix as he looks to add to his already stout resume.