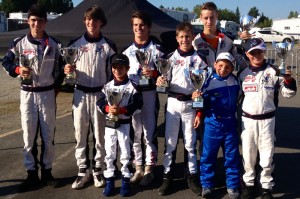 The SH Karting squad returned home from Karting Grand-Mère with a bevy of hardware after taking four wins and four additional podiums in the third round of the Coupe du Quebec
(Photo credit: SH Karting)

Heading to the Karting Grand-Mère facility just north of Trois-Rivieres, Quebec for the third round of the Coupe du Quebec program, SH Karting would set their goals high in the hopes of attaining multiple race wins and podium results. In the final event at the Grand- Mère circuit, which closed its doors after this past weekend’s Coupe du Quebec round, the Zanardi importer and Tony Kart dealer was represented on the podium on eight different occasions and managed to take the top spot four different times.

“It was a great weekend for SH Karting,” expressed Team Manager Sacha Gagnon. “All of our drivers drove exceptionally well and the results speak volumes for the entire team. This is great for our entire squad as we can now look to carry the momentum into the second half of the season including the prestigious Canadian Karting Championships in late August.”

Following in Szigeti’s footsteps were SH Karting’s youngest drivers and future of the sport. Taking four podium results over two classes, Zanardi and SH Karting pilots would win both Rotax Micro Max and Mini Max. Thomas Nepveu would take the top step in the Micro Max ranks and would be joined on the podium by fellow SH Karting pilot Alexandre Legaré, who would cross the line third.

SH Karting would make it a one-two finish in the Mini Max division as Andres Dealba took top honours in front of Coupe du Quebec rounds one and two winner Charles Deschenes. Together the duo would dominate the Mini Max category, utilizing the potent Zanardi chassis as both drivers would be the class of the field throughout the day and celebrated on the podium at the event’s conclusion.

In the talent-laden Rotax Junior field, SH Karting would once again be seen on the podium, this time by Alexandre Couturier. The young and up-and-coming driver would battle hard all day long but would be forced to settle for the third and final podium position when the checkered flag flew.

Showing their true diversity, SH Karting and the Zanardi chassis did not only win in Rotax divisions, they also topped the blocks in the Briggs 4-Cycle ranks as well. Taking another one-two finish in the lower horsepower class, Maxime Couturier would emerge victorious while Tommy Lemaire-Oullet would come home second on the day after taking the win in round two at SRA Karting.