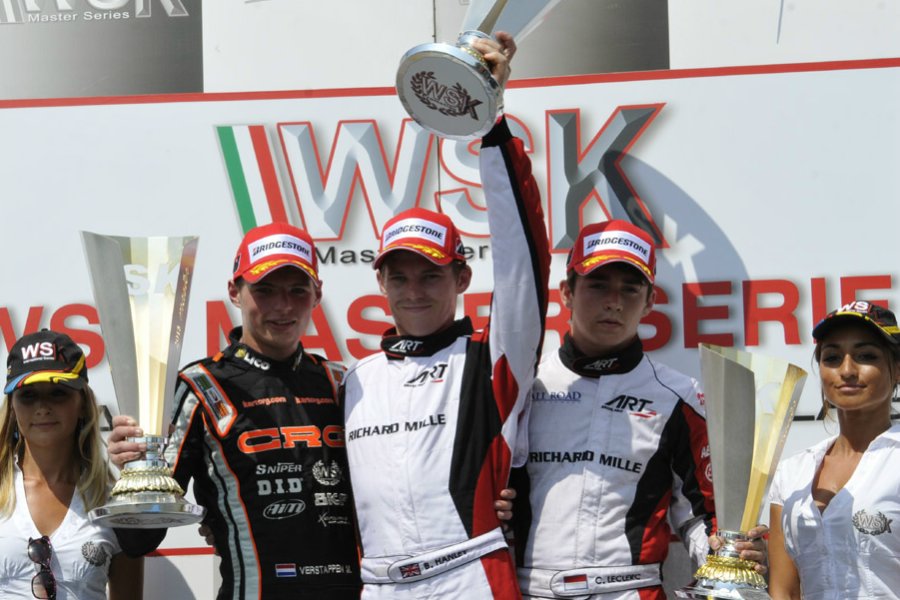 Hanely wins the feature with the title going to Verstappen
(Photo: Press.net Images)

The winners of the WSK Master Series Finals in Castelletto (Italy): Hanley (Art GP-TM KZ2), Corberi (Kosmic-Vortex KF), Norris (FA Kart-Vortex KFJ), Marseglia (Top Kart-Parilla 60 Mini). The recap of the weekend with all the winners on RaiSport 2 with the special report on Friday 19th.

A terrific finale for the WSK in Castelletto
Expectations were completely fulfilled and, in the final phase too, the last round of the WSK Master Series was eventful and rich of thrilling moments. The event took place in Castelletto di Branduzzo (Pavia, Italy) and, after the results of the Finals, the standings were finally set in the four categories. Since qualifying, drivers seemed focused on their position in the ranking, even though they were always committed to seeking the best performance on the 7 Laghi circuit. So, when the race reached its final phase, the challenge between top drivers was even more gripping than expected, also because new protagonists took centre stage, hoping to get an important and prestigious result.

In KZ2 the Final is won by Hanley. The 2013 championship goes to Verstappen
Max Verstappen (CRG-TM-Bridgestone) was resolute in keeping the leadership of the KZ2 championship. The Dutch driver, however, had to cope with the English Ben Hanley and Charles Leclerc (entrambi su ArtGP-TM-Bridgestone) from Monaco. After the victory in Saturday’s Final 1,  Hanley outpaced everybody also in Sunday’s Final 2.  Verstappen beat Leclerc into third place, even though the Dutch never managed to close the gap with Hanley, who kept the lead steadily until the finishing line. These three drivers went on the podium, where Verstappen celebrated also the conquest of the KZ2 title. Bad luck for Riccardo Negro (DR-TM-Bridgestone), who finished 9th. He was Verstappen’s main rival but he never had the chance to close the gap with him. Negro even left the second place to Hanley.

Corberi achieves success in the KF Final,  Boccolacci wins the Master Series
The  Italian Luca Corberi (Kosmic-Vortex-Vega) was surprised too when he found himself leading the KF in the Final. He was always in control of the race, from the start until the chequered flag. Dorian Boccolacci (Energy-TM-Vega) was out of the game already at the  beginning of the race, even though his victory in the Prefinal had made his leadership in KF. The French was well aware of the fact that the behind Corberi the positions occupied by the English Callum  Ilott  (Zanardi-TM-Vega)  and Ben Barnicoat (ArtGP-TM-Vega) were no more a menace to his leadership.

Norris wins the Final but Lorandi keeps the leadership in KFJ
The English Lando Norris (FA Kart-Vortex-Vega) could not do any better. He achieved an awesome hat-trick: pole, heats, Prefinal, Final and fastest lap in the KFJ. He left nothing to his rivals. Among them, the best was the Russian Nikita Sitnikov (Tony Kart-BMB-Vega), the runner-up of the Final, followed by the British Max Fewtrell (FA-Vortex-Vega). Alessio Lorandi (Tony Kart-Parilla-Vega) was dogged by bad luck: he got involved in a crash which pushed him out at the beginning of the race. Despite the poor result in this weekend, Lorandi is the winner of the WSK Master Series.

Marseglia achieves a maiden victory in the 60 Mini, Martinez is first in the ranking
The 60 Mini Final speaks Italian, with three “azzurri” on the podium. The fastest of the Final was Leonardo Marseglia (Top Kart-Parilla-Le Cont), at his maiden victory at international level. He passed Giuseppe Fusco (Lenzo-LKE-Le Cont), winner of the Pre-final, at the start. Fusco did not manage to close the gap and finished second. On the third step of the podium Domenico Cicognini (EKS-LKE-Le Cont). The Spanish Eliseo Martinez (CRG-LKE-Le Cont), who pulled over after a contact at the start, won the Series.

The highlights on TV
The recap of the weekend of Castelletto di Branduzzo is on TV, on Rai Sport 2 on Friday 19th July at 8:00pm, thanks to the WSK TV Magazine.