With the end of the 2013 Florida Karting Championship (FKCS) series on the horizon, teams and competitors would head to Ocala, Florida for round five of the series. Taking place at the pristine Ocala Gran Prix (OGP) facility in North Central Florida, great racing action was highlighted over the July 4th holiday weekend along with the Crazy Cuban Tent Sale and Fireworks display put on by the staff at OGP.

“Whenever a series has an event in Ocala, you can always expect some of the best hospitality and courteous track workers in the state of Florida,” explained FKCS President Eddie Gennaro. “The facility was in tip top shape yet again and the racing action was awesome. The track may be short, but it provides for some of the best racing that the series has to offer.”

Not only was there racing this weekend, Ocala Gran Prix’s Jorge Arellano held his sometimes annual, sometimes semi-annual Crazy Cuban Tent sale in conjunction with the FKCS event. Selling karting items at steep discounted prices to help grow karting in the state of Florida, the lines were long as karters, competitors, teams and even series officials arrived early to get their hands on some equipment.

A fireworks display at day’s end was a great way to kick off the weekend as all FKCS teams and competitors would be invited to take in the festivities.

Saturday would see drivers get down to business as morning warm-ups would be followed by qualifying and then exciting wheel-to-wheel competition. With series championships on the line and one event remaining on the schedule, drivers would look to score the necessary results to help put them in the position to challenge for the elusive championship trophy in six weeks time. 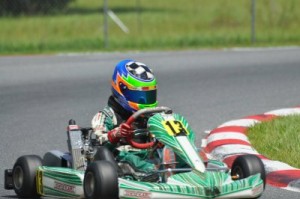 Devine Design – Kid Karts
The Ocala Gran Prix facility provided another great outing for the future of the sport as five Kid Kart drivers would turn laps and begin to hone their skills. Receiving participation awards at the end of the day’s competitions were Daniel Kraiewski, Francisco Poratta, Owen Lloyd, James Egozi and Lucas Rodriguez. The Kid Kart competitors will be back in action during the final round of the series in late August.

Performance Plus – Senior Clone
Joey Miller would turn his morning pole position run into another race victory in the Senior Clone division as he took the win by just over two seconds. Glenn Fitcher, relief driving from Brandon Salyor, would cross the line second just ahead of Michael Clark. Douglas Schmidt and Jason Froemming would round out the top five.

Homestead Karting – Rotax Mini Max
It was a familiar face at the top of the Rotax Mini Max results at day’s end, as Mathias Ramirez would add another victory to his 2013 win total. Taking the dominating win and morning pole position, Ramirez finished ahead of podium winners and brothers Ian and Aidan Keel. Zachary Hollingshead utilized home track advantage to come home fourth while Vincenzo Sarracino rounded out the top five.

Parazhino Chassis Works – Rotax Micro Max
Jordan Heffner would return to the top of the Rotax Micro Max results with a pole position and main event victory this past Saturday. Always having the speed to win, the young female put it all together in Ocala. WKA Manufacturers Cup race winner Jeremy Fairbairn would come home second with Jo Nunez, Bryce Haines and Humberto Porrata finishing third through fifth respectively.

Connery Concrete – Rotax Senior
It was the OGP contingent of drivers that would dominate the Rotax Senior ranks, as several national level race winners would run up front. Florida Winter Tour champions Nick Neri and Oliver Askew would swap the top spot throughout the day with Neri coming out on top in the end. Askew would cross the line second, falling back one position from his morning qualifying session while four time WKA Grand National winner Jonathon Kotyk would come home third. Dustin Stross would cross the stripe fourth, just ahead of female driver Morgan Healey.

RaceComplex – TaG Junior
Seve DePinto would take the top spot in the TaG Junior main event as he drove a smart and restricted main event. Not having a lap fast enough to classify him in the top-five in the day’s final, DePinto still managed to top the blocks. Sebastian Sierra would claim the second position while Colin Warren would garner third. Olivier Bellanger and Quentin De Boever would have a battle royale for the fourth position with Bellanger coming out on top. Pole position would go to Sebastian Sierra. 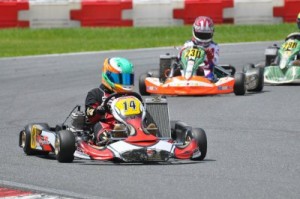 Orlando Kart Center – Mini Rok
After claiming the pole position, Vincenzo Sarracino would continue his run on top. Dominating the Mini Rok main event and taking the checkers by nearly three seconds, Sarracino would celebrate at the day’s podium presentations. Aidan Keel added another podium result for the Keel family while Humberto Porrata crossed the line in third. Zachary Hollingshead added his second fourth place result of the day with Juan Jose Diaz rounding out the top five.

Rok Cup USA – Rok Masters
Only three drivers would enter the Rok Masters division this weekend as Francois Brun-Wibaux, Thomas Hankinson and Michael Sachs would claim podium results before their day’s event started. Brun Wibaux would be the best of the over thirty-five competitors taking the race win while Sachs and Hankinson would cross the stripe in second and third.

Heffner Performance – TaG Masters
Scott Roberts would continue to flex his muscles in FKCS competition, as he would take another victory. As one of the dominant drivers in the Masters ranks over the past two seasons, Roberts is always at the pointy end of the field. Brent Lyman and Rob Maier would finish second and third while Phillip Pierce and Mark Thomas would round out the top five.

Verde Speed Resource – Rok Senior
Ashley Rogero would be untouchable in Saturday’s Rok Senior action as she went on to take the pole position and main event victory. Turning her fastest race lap nearly half a second faster than the second place competitor, Rogero cruised to victory. Ian Cummings and Eddie Rodriguez would cross the line in second and third respectively while Aaron Schmitt and Garrett Peterson claimed the fourth and fifth place results.

NFKC – Junior Clone
Just as Rogero did in Rok Senior, Jason Yarbrough did in the Junior Clone division, driving off into the distance. Qualifying on the pole in the morning, Yarbrough did not look back in the day’s main event as he went on to take the victory by 19 seconds. Nash Duyn would come home second while Benjamin Withers, Jimmy Jackson and Hunter Fox would finish third through fifth respectively. 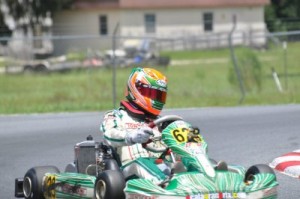 Orlando Kart Center – Rok Junior
Austin Garrison would return to the top step of the podium in FKCS competition as he went on to claim the victory just ahead of Ocala Gran Prix teammates Ryan Norberg and Sasha Brun-Wibaux. Sebastian Sierra and Colin Warren, pulling double duty on the day, would cross the stripe in fourth and fifth. Morning pole position winner Kyle Kirkwood would not even turn a lap in the main event and be classified at the tail of the finishing order.

RaceTechDevelopment.com – Rotax Junior
Austin Garrison would score his second victory of the weekend, as he would take the checkers in the Rotax Junior category. Morning pole position winner Kyle Kirkwood would cross the line second just ahead of Olivier Bellanger. Sebastian Sierra and Quentin De Boever would both claim their second top-five result of the weekend.

Verde Speed Resources – Rok Senior
Sunday’s Rok Senior finale would be a carbon copy of Saturday’s results, as Ashley Rogero would once again sweep the day. Taking the pole position in the morning and main event victory in the afternoon, Rogero capped her event with a weekend sweep in the division. Aaron Schmitt would add a second place result while Eddie Rodriguez would score his second third place result on the weekend. Garrett Peterson and Ian Cummings would be the fourth and fifth place finishers.

Cadet Sportsman
Devin Boutout would garner the Cadet Sportsman pole position but would be out of the top-five come day’s end. Vincenzo Sarracino would make his second trip to the top step of the podium this past weekend taking the main event victory. Mathias Ramirez would narrowly miss out on the win and have to settle for second while Hunter Padilla had a terrific run to come home third. Aidan Keel added another top-five result finishing fourth while Zachary Hollingshead claimed his third top-five result of the weekend. 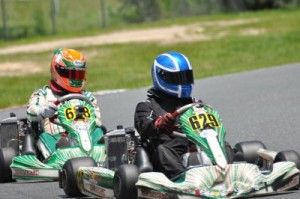 Harvest Motorsports and Ocala Gran Prix – Shifters (ALL)
Nick Neri would claim his second win of the weekend as he went on to sweep the Shifter category at Ocala Gran Prix. Qualifying on the pole, Neri never looked back and claimed the race win just ahead of OGP teammates Oliver Askew and Ashley Rogero. Jonathon Kotyk and Morgan Healy would finish fourth and fifth.

Rok Cup USA – Rok Junior
Kyle Kirkwood would return to the top step of the podium on Sunday in the Rok Junior category as he went on to claim the pole position and victory making up for Saturday’s result. Ryan Norberg would add his second second place result of the weekend while Saturday’s winner Austin Garrison would cross the stripe third on Sunday. Sasha Brun-Wibaux and Devin Bowerman would round out the top five.

RYSA Racing – TaG Senior
Just as it was in round four of the series, Dustin Stross would steal the show in TaG Senior in Ocala. Claiming the pole position in the morning and fastest lap in the main event, Stross went on to take the race win over Jonathon Kotyk and Brandon Salyer. Corey Towles would return to the top-five with a fourth place effort while Zeb Davis would come home fifth. 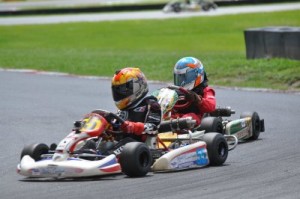 The final event of the 2013 Florida Karting Championship Series will take place at the 103rd Street Motorsports Complex over the August 23-25 weekend. Please check the FKCS website in the coming weeks for registration, pit spot and hotel information.