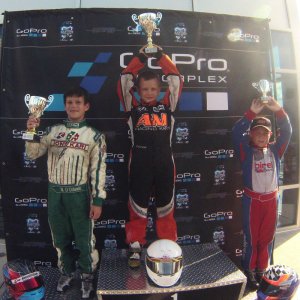 With the upcoming Rotax Max Challenge United States Grand Nationals on the horizon, Rotax Micro Max standout and AM Chassis pilot Tyler Gonzalez would head to the GoPro Motorplex facility in Mooresville, North Carolina for this past weekend’s GoPro Summer Shootout. Known as the “unofficial test weekend” leading up to the big show, Gonzalez proved that he had the speed and race craft to compete at the fast and flowing facility.

As one of the quickest drivers on track during Thursday and Friday’s test sessions, the AM Engines powered Gonzalez showed why he is one of the favorites to take the Rotax Micro Max National Championship in 2013. After qualifying on the pole position for Saturday’s wheel-to-wheel action, Gonzalez would go on to win the prefinal, but was later moved to the tail of the field for failing post-race technical inspection.

Not one to get down on himself, Gonzalez took it all in stride and lined up in the last position for the start of the main event. Looking to gain experience and test for the upcoming Nationals, Tyler drove like a seasoned veteran as he sliced and diced his way through the field. With his AM Engines powered AM Chassis running flawlessly, Tyler moved into the top-five after only three circuits and eventually took over the lead and race win.

“It was heartbreaking to see Tyler be disqualified after the prefinal,” explained Alberto Gonzalez, father of Tyler. “He drove great and we do not think the issue in the carburetor was performance enhancing. He never gave up and was determined to win. It was an awesome drive from through the field and we are looking forward to tomorrow’s event.”

Back to the same GoPro Motorplex facility on Sunday, Gonzalez would once again prove to be one of the quickest drivers in the Rotax Micro Max class, qualifying in the second position and starting the prefinal from the outside of row one. Holding station through the prefinal, the talented eight year old was ready for the main event and excited on his chances to score a double victory on the weekend.

With three karts breaking away from the talented field of drivers, the AM Engines pilot would battle in the trio as they all swapped the top position on numerous occasions. With any one of them able to take the win, it was not to be for the young AM Engines powered driver as he would end the day on third step of the podium.

Alberto continued, “Tyler has only been driving for 18 months and to see him progress the way he has is amazing to me. He has already earned a ticket to compete at the Rotax Max Challenge Grand Finals later this season and is the current point leader in the Florida Karting Championship Series Rotax Micro Max division.”

With the upcoming Grand Nationals, Gonzalez is looking even further ahead in the 2013 season. With plans to compete at the Grand Finals in New Orleans later this season as well as the SuperKarts! USA (SKUSA) SuperNationals in Las Vegas, Nevada, the future looks bright for the up and coming champion.

Tyler Gonzalez would like to thank all of his supporters for an amazing 2013 season. A special thanks to Ariel Castro of AM Engines, AM Engines Racing Team, his mechanic Bo, Tony Tesoro and Superior Coating Systems.

For more information or sponsorship opportunities on Tyler Gonzalez please contact Alberto Gonzalez at 407.466.9083 or via e-mail tosuperiorcoatingsystems@yahoo.com .

For more information on AM Engines, AM Chassis and the AM Racing Team, please contact Ariel Castro via e-mail to Info@AMEngines.com , by phone to 786.271.9052 or visit them online at http://www.AMEngines.com