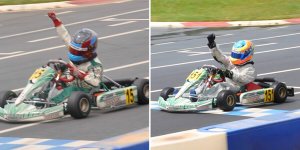 Michael (Right) and Nicholas (Left) celebrate their victories in both Rotax Mini Max and Micro Max at the GoPro Summer Shootout
(Photo: dOrlandoRacing.com)

After competing at the fourth round of the World Karting Association Manufacturers Cup program in South Bend, Indiana, d’Orlando Racing (DRC Inc.) pilots Michael and Nicholas d’Orlando would head south to Mooresville, North Carolina. Traveling directly to the GoPro Motorplex in preparation for the GoPro Summer Shootout, the d’Orlando duo would return to Rotax powered karts in the hopes of bringing Team Koene USA another victory.

Hitting the track late Wednesday afternoon and running in both wet and dry conditions on Thursday, the duo would have a busy Friday testing new engines provided by Koene USA. Showing their speed right out of the box, both Michael and Nicholas were one of the quickest drivers in their respective divisions.

Nicholas would be the first of the DRC pilots to complete his day on Saturday and would do so in the second position. After qualifying his Team Koene USA prepared Tony Kart on the outside of the front row, the younger of the d’Orlando brothers would remain consistent throughout the day. After a slight mid-race mishap that would see him fall down the running order and then able take advantage of some other drivers’ misfortunes, Nicholas would manage to claim a fourth place result in the prefinal.

Looking for more in the main event, d’Orlando would get on the rear bumper of the eventual race winner and push hard to break away from the field. Making it a two-kart race for the win, Nicholas would come up just shy of the top spot, crossing the line in second and celebrating on the podium later that evening.

After qualifying in the top-five and running in third in the Rotax Mini Max prefinal, Michael would be involved in an incident that sent him spiraling down the running order. Hit by another competitor and sent into a spin at the end of the back straight, Michael would fall outside the top-twenty and eventually finish the prefinal in the 16th position.

Heading to the grid for the main event, skies darkened and rain began to fall. In a mad dash to install rain tires and a wet weather setup, d’Orlando was excited about his chances. In the dry, the goal was to move forward and up the running order, all well logging some test laps, but in the wet, the chances at a victory were increased. Starting 16th and moving into the top-five by the middle of the second lap, Michael methodically worked his way forward to take the point with five laps remaining. Setting the fastest lap of the race, Michael managed to stretch the lead and take the checkers to score his third major victory of the season.

Back to the track on Sunday, Nicholas d’Orlando would have a dominant day, as the rest of the Rotax Micro Max drivers would get a good view of his rear bumper. After qualifying on the pole position and claiming the prefinal victory, Nicholas would go on to sweep the day by outdueling fellow Micro Max drivers in a three way battle for the win.

Sunday would prove to be a little bit of a tougher challenge for the elder d’Orlando as a ninth place qualifying effort would see him start the prefinal inside row five. Unable to find the necessary draft in qualifying, Michael was disappointed with his result and would look to move forward when wheel-to-wheel action commenced.

Gaining six positions in the prefinal to finish third and elevated one more to second to due a technical infraction by another competitor, Michael and his Team Koene USA tuner Mike Maurini went to work on his Tony Kart to ensure a strong package for the main event. Setup changes to both the kart and carburetor increased speed and Michael was able to challenge for the win in the day’s final. Moving forward during the opening laps, Michael would take the point mid-race as he and a fellow competitor would begin to open a gap on the rest of the field.

Working together to make it a two-kart race, the leaders would swap the top spot on several occasions before Michael would fall back to second with two laps remaining. Making a bid for the lead on the final circuit, an incident bringing out the red flag would halt the race, as officials would revert to the previous lap for finishing results. Giving up the lead a few corners before the two laps to go sign, Michael would be classified in the second position scoring his second podium result of the weekend and garnering the most points of any Rotax Mini Max driver over the event weekend.