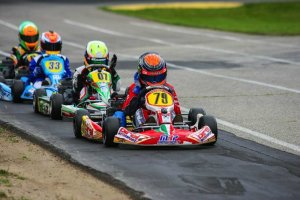 David Malukas scored two big wins over the last two weeks in a couple of the most competitive karting series in the country.

Two weeks ago David and the HMD Trucking MRP Birel team traveled about an hour and a half east of the Malukas’ Chicago-area home to compete at round four of the 2013 World Karting Association Manufacturers Cup Series at JET Karting at Michiana near South Bend, Indiana.

The HMD team, led by Henry Malukas and Wes Phillips, were one of the few teams to pack up at South Bend
Sunday night and head to Mooresville, N.C., a couple days later for the Rotax Summer Shootout at the new GoPro Motorplex.

The event marked David’s second trip to Mooresville, the first being the USPKS opener in April.

And for the second time, Mother Nature played a role in the event at the Motorplex. A shower rolled into the Mooresville area just before the start of the Rotax Mini MAX final Saturday, forcing teams to switch to rain tires.

David, starting at the rear of the field, shot to the inside on the start and nearly passed half the field but was forced to the inside of the chicane and through a large water puddle. He was able to continue, but lost a lot of ground. From there Malukas marched through the field and settled for eighth position, but he did set the race’s second fastest lap to winner Michael d’Orlando while negotiating through traffic.

Malukas rebounded Sunday and in dry conditions he wheeled his MRP Birel to a big feature win in Mini MAX.

After finishing sixth in the pre-final, Malukas quickly made it to the front of the field in the main event and proceeded to battle Saturday Mini MAX winner d’Olrando throughout the 18-lapper.

David passed d’Orlando before halfway to take the lead but d’Orlando returned the favor with three laps to go, relegating David back to second spot. But David wasn’t to be denied, passing d’Orlando once again with one lap remaining. A red flag on the 18th circuit ended the race, and with the field reverted back to the last fully completed lap, the win went to Malukas.

“It was a really good race with Michael,” said Malukas, who also scored a Rotax win in the Florida Winter Tour at Ocala Gran Prix. “I’m getting to really like this track. We were fast Saturday but kept losing track position, so we never got to run up front in the final. We knew we’d be good Sunday, and I’m happy to get the win. Thanks to my dad, Wes, the Lobaughs at MRP and HMD Trucking. Hopefully we can take this and win the Grand Nationals!”

David speaks of the upcoming Rotax Grand Nationals at Mooresville. The event, one of the biggest karting races of the year, takes place July 31-Aug. 3.

On the Man Cup side, David’s South Bend win gave him six WKA Manufacturers Cup final victories on the season and keeps him in the thick of the national championship points battle.

The closest points battle is in Cadet, which shows Brandon Lemke a mere five points ahead of David. Zach Holden is only 80 points back of David, in third. Lemke is in control in Yamaha Sportsman as David sits 305 points behind.

David still has a shot at Komet Sportsman 1. Lemke is 65 points ahead of Malukas and Anthony Gangi Jr., who are tied for second.

The HMD Trucking team’s busy schedule continues with USPKS round three this weekend at Badger Raceway in Wisconsin. David will then travel to his parents’ native Lithuania for the first time in his life before returning to the States to run the Rotax Grand Nationals at Mooresville.

After Mooresville will be two straight weekends of racing at the Pittsburgh International Race Complex. The WKA Great Lakes Series will run Pitt August 9-11 and round five of the Manufacturers Cup Series runs Pitt August 16-18.

Malukas rides No. 79 MRP Motorsport Birels and is proud to be sponsored by HMD Trucking. For more information, visit DavidMalukas.com