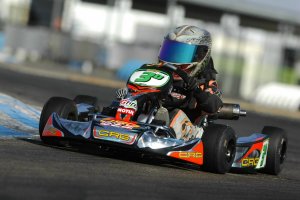 Grand Junction’s own Tristan MacLeod is set on reaching the podium next weekend at the SKUSA SummerNationals
(Photo: On Track Promotions – otp.ca)

Not much can make a racer happier than looking at the schedule and seeing one of the biggest races of the year taking place at their home track. Grand Junction driver Tristin MacLeod is pretty happy right now. The TaG Cadet racer spent the past weekend racing in the Rocky Mountain ProKart Challenges fourth and fifth rounds at Grand Junction Motor Speedway. MacLeod, along with a paddock full of other racers were preparing for the upcoming Superkarts! USA SummerNationals, which will be contested at GJMS over the weekend of July 19-21.

Tristin entered the weekend third in the overall point standings in the highly competitive TaG Cadet division after three rounds of racing in Utah and Colorado. Tristin and his father Jim relocated to Grand Junction a year ago to be closer to his race team CRG-USA’s head quarters. The move has proven to be a wise decision, as an increase in Tristin’s track time has shown an increase in speed and race craft. Also living closer to the Grand Junction facility has allowed MacLeod time to learn and work with CRG-USA senior drivers, including national champion and S1 pilot Sabré Cook, who spent a few days working with Tristin earlier in the summer. Unfortunately, Tristin’s hard work was not showcased as planned due to an engine issue during racing in rounds four and five.

“The motor was really fast in practice on Friday,” Tristin said after the racing completed Sunday afternoon. “But for some reason it just laid down on us once racing started this weekend. It’s really frustrating.”

In the biggest field of Cadet drivers the Rocky Mountain PKC has seen this season, MacLeod qualified his CRG seventh on Saturday. He would stay there through both heats as he and his dad struggled to squeeze more power out of their Woltjer power plant. In the main event, Tristin made the best out of a bad situation. Racing amongst the leaders at the start of the race, Tristin moved from his seventh place starting spot and ran as high as fourth. At the end of the day, Tristin was able to salvage a top-five finish out of a very rough round four.

On Sunday, MacLeod was still being plagued by horsepower issues. Tristin qualified in eighth to start round five. Eighth is where he would stay for the first heat before gaining a spot in the second heat and finishing in seventh. Just like the day before, while not being able to showcase his speed down on power, Tristin did however showcase his perseverance and will. MacLeod jumped to fifth at the start and stayed there for four laps before he was slotted back to his starting position of seventh, where he would finish the main event and round five.

“This weekend did not go as good as it could have I think,” Tristin said before the podium celebrations took place. “We had a really good kart in practice, and Sabre helped me out a lot. But we’re going to get the motor fixed this week, and be ready for SummerNats. I can’t wait!”

Tristin and his dad would like to extend a big thank you to PJ Jones and the entire Jones family for their assistance all weekend. Tristin would also like to thank CRG-USA for their support, and Sabré Cook for her driver coaching in preparation for the event. MacLeod will hit the track next on July 19 when the SKUSA Pro Tour SummerNationals begins at the Grand Junction Motor Speedway and runs the entire weekend.

About Tristin MacLeod:
Tristin is an energetic and excited young kart racer. Now in his fourth year of racing karts, the 10-year-old has relocated to Grand Junction, Colorado to be closer to CRG-USA headquarters and their home track, Grand Junction Motor Speedway. In 2012, Tristin competed in the SKUSA Rocky Mountain ProKart Challenge series and finished third in the TaG Cadet point standings in his first season of regional competition. For 2013, he plans to campaign both the SKUSA Pro Tour and run in his sophomore season of the Rocky Mountain ProKart Challenge. In his off time, Tristin enjoys the outdoor life, camping, and fishing and is also an avid archer.