Ralston will now shift focus to US Grand Nationals 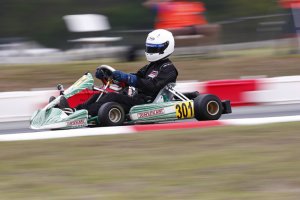 Descending on the Mooresville, North Carolina area, Roger Ralston Jr. would participate in this past weekend’s GoPro Summer Shootout. Known as the ‘unofficial tune-up’ for teams and drivers leading up to the Rotax Max Challenge United States Grand Nationals, Ralston Jr. would impress all with his double podium performance and constant speed to run at the front of the talented Rotax Senior field.

“It was a great weekend for me both in regards to results and mentally,” explained Roger Ralston Jr. post event. “We were quick in practice leading up to the event weekend in both wet and dry weather testing so I was confident of a good result.”

Carrying his speed into the weekend, Ralston Jr. continued to turn heads as he marched his way up to the top of the time sheets in the Saturday morning qualifying session. Claiming the elusive pole position and preferred inside front row starting spot for the prefinal, the Tony Kart driver would look to carry the momentum throughout the rest of the weekend.

When the green flag flew for the prefinal, Ralston quickly moved to the point but would fall back to the third position by the end of lap one. Working hard to get back to the front of the field, the up-and-coming driver slotted himself back into P2 on lap two and eventually took over the top spot before the mid-race distance. With competitors utilizing the draft against Ralston, he would fall victim to a late race tandem and eventually be classified in the second position. Post race, Ralston would receive some bad news from officials as he was relegated back two more positions for an on track penalty.

Starting the main event from outside row two, Ralston knew that his opening few circuits would make or break his race. Falling back to fifth on the start, Ralston was quickly able to move back to the fourth position on lap two and begin his quest for a podium result. Maintaining his pace and tracking with the lead trio, Ralston would run in the fourth position until the final circuit where he would take advantage of an on track incident in front of him to advance forward to the second step of the podium.

Looking to improve on Sunday, Ralston and his tuner Austin Miles would make minor changes to his Tony Kart but qualifying would be a disappointment for Saturday’s podium finisher. Waiting in the pits for a few minutes to ensure a clean track, Ralston would fall victim to the weather as rain began to fall when he entered the track. Quickly trying to get up to speed and get a lap in before track conditions deteriorated even more, Ralston would only be able to claim the eleventh quickest time of the session and would start his prefinal from inside row six.

Ralston continued, “Starting in the 11th position, I knew I would need to work my way forward and do so in a hurry. Within the first five laps, I was able to move to fifth and from that point on, I worked on conserving my tires. Knowing that an inside row starting spot would be beneficial for the main event, I tried to just maintain my position and pace in the hopes that other competitors would wear out their equipment.”

At the start of the main event, Ralston immediately went on the attack and moved into the third position on the exit of the first corner. Drafting the second place kart down the long back straight, the Florida resident slotted himself into second where he would sit the majority of the race. Working a rhythm to keep him in contact with the leader, Ralston would bide his time before mounting a second attack.

As the long final wore on, Ralston began to notice an issue with his Rotax power plant. A slight hesitation would develop on the exit of corner one and kill all the momentum needed for his run down the back straight. Falling back little by little, the third place driver was able to move around Ralston for position before the checkers would fly.

“I am happy that we were able to score double podiums this weekend but I really think we could have won today,” explained Ralston. “I felt much faster than the leader before the engine issues started but sometimes in racing, everything doesn’t go as planned. I am confident heading into the Grand Nationals in a few weeks time.”

Roger Ralston Jr. would like to thank his 2013 sponsors for their continued support. A special thank you to Brandon and Eric Jones of Kart Sport North America as well as Daniel Cammish and Steve Ogden from Ogden Motorsport for their fantastic support. Roger would also like to thank DirectView Security Systems as well as his Mom and Dad for believing in him.

For more information on Roger Ralston Jr. and to follow his progress and climb up the motorsports ladder, please visit him online at his Facebook Fan Pagehttp://www.Facebook.com/RogerRalstonJrRacing and through his Twitter and Instagram accounts by searching @RogerRalstonJr. For sponsorship opportunities or information in how to partner with Roger Ralston Jr., please contact Roger Ralston Sr. at 561-441-1141 or 561-531-1800 or via e-mail to RCIROGER@yahoo.com