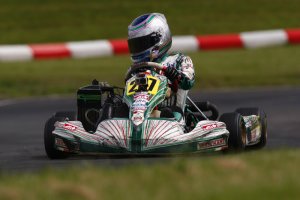 Taegen Poles showed the speed to run near the front in Rotax Junior
(Photo: Summit GP)

Heading to the second event weekend in the Eastern Canadian Karting Championship (ECKC), Tony Kart team Summit GP continued to show their speed in the Rotax divisions. With the event-taking place at the famed Goodwood Kartways near Stouffville, Ontario, and team drivers would flex their muscles scoring pole positions and podium results along the way.

“Goodwood Kartways is a very challenging track,” expressed Summit GP Team Manager Darren White. “Since it was repaved earlier this year, some of the characteristics have changed and it is new for everyone. It is fast, tight, twisty and smooth and provided our drivers with some great results.”

Leading the way for the Summit GP squad was Rotax Senior driver Zacharie Scalzo. Showing speed throughout testing leading up to the weekend, Scalzo turned up the wick in qualifying Saturday morning to score the pole position and favored inside front row starting spot. Unable to hold the point throughout the day, Scalzo would end the day on the second step of the podium on route to scoring the fastest lap in the main event. Sunday would see Scalzo back in the hunt for another podium result. After qualifying his Tony Kart ride in the fourth position, the Quebec resident moved forward to claim a solid third place result.

Fellow Rotax Senior teammate Mathew Peralto turned his 24th place qualifying effort on Saturday into a 16th place finish, but had no luck on Sunday as he would end his weekend in 26th.

Taegen Poles would lead the way for the Summit GP Rotax Junior contingent as the young female pilot would move forward from her qualifying results to have some very strong finishes. Saturday would see the Tony Kart driver qualify in the 12th position but methodically work her way forward throughout the day. Gaining a few positions in the prefinal, Poles would show the speed needed in the main event to cross the stripe in the sixth position. Sunday would be a little tougher go for the young female as a disappointing qualifying run would see her back in 16th. With the same approach as she had on Sunday, Poles once again moved forward to just miss out on a top five result and come home in sixth.

Anthony Tolfa, double podium winner from event weekend one, would have a weekend to forget. Enter the Goodwood Kartways round as the point leader; Tolfa would qualify in the 20th position on Saturday. Working hard to move forward, Tolfa would run into contact that would slow his progress as he was only able to muster a 14th place result. Sunday would be a little better for the up and coming talent as he was able to turn his 11th place qualifying run into a ninth place result.

Summit GP’s newest driver would make his debut with the team this past weekend in the Rotax Mini Max division. Jackson Neilands would get behind the wheel of a Tony Kart and quickly run inside the top ten. Qualifying in the tenth position for both Saturday and Sunday, Neilands would remain consistent throughout the weekend scoring a pair of eighth place results all while running with the lead pack throughout the weekend.
Dante Lerra would be Summit GP’s lone entry in the Rotax DD2 ranks as he battled with some of the countries top karting drivers. Qualifying seventh on Saturday and coming home with an eitgth place finish, Lerra continued his string of top ten results with a solid ninth place effort on Sunday.

White continued, “With the Ontario rounds now out of the way, we will focus on the two Quebec rounds of the series as well as the upcoming Canadian Karting Championships. With a jam-packed schedule, we have several opening under the Summit GP team tent as well as arrive and drive opportunities available.

For more information about the Summit GP racing team, the OTK and Tony Kart chassis line as well as product sales and arrive and drive programs, please visit their website http://www.summitgpkarting.com or contact them by phone at 905.377.5845.