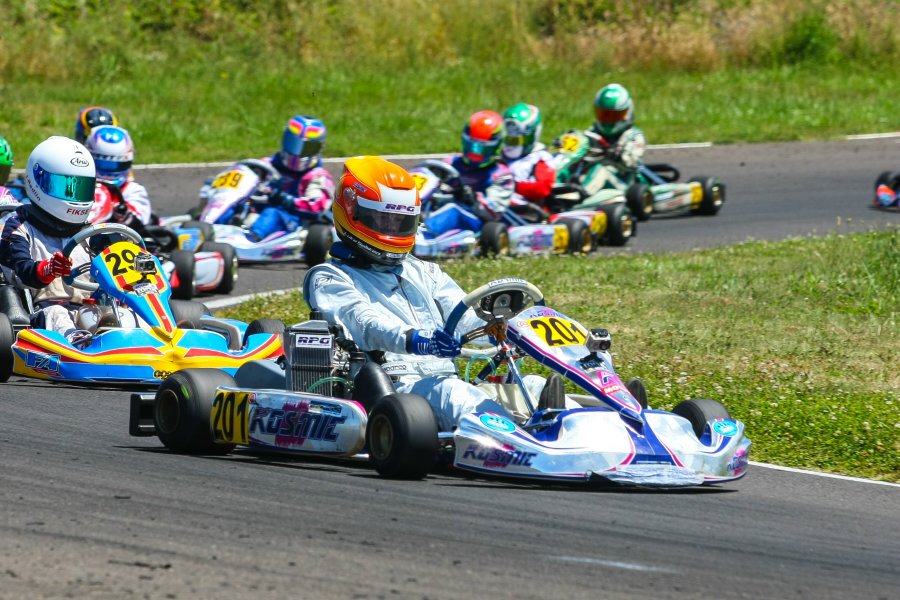 The inaugural season of the Can-Am Karting Challenge added another successful event into the records as racers from all over the United States and Canada gathered at the Portland Karting Association facility in McMinnville, Oregon. The ‘Mac’ track challenged the racers of the Can-Am Rotax Max Challenge and the Superkarts! USA Can-Am ProKart Challenge throughout the July 5-7 weekend, with a number of drivers able to master the course to earn the right of the checkered flags and the top step of the podium.

It was a sweep both days in the HoleShot Drive Systems Rotax Senior division, done by two different drivers, as the championship fight has narrowed up. Saturday was a solid performance by Parker McKean as he swept the days action against the championship contenders. McKean recorded a fast lap of 40.311-second to secure the pole position in qualifying with point leader Stepanova Nekeel and Pat’s Acres double winner Joey Wimsett. Nekeel looked to have the prefinal in hand until he lost a chain, handing the lead and the win to McKean. With a clear path in front of him, McKean took advantage and led all 20 laps for his first series victory. SoCal driver Jake Craig was a very close second place, also stealing the fast lap bonus points, with Wimsett running third. Former US Grand Nationals champion Phillip Arscott started the Prefinal dead last and drove up to finish fourth with Kyle Byers in fifth. 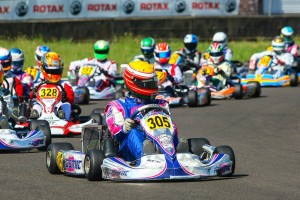 Nekeel redeemed himself from the poor results of Saturday to sweep the action on Sunday. His 40.471-second lap in qualifying put him P1 for the prefinal, which led to a wire-to-wire win. Nekeel would go on to lead all 20 laps of the feature to score his third victory of the season and maintain the point lead. Craig moved up to second early with him and Wimsett looking to track down Nekeel after he jumped out to an early lead. Wimsett was able to overtake for second with four laps remaining, however he was unable to catch Nekeel in the closing laps but did steal the five bonus points for fast lap in the race. Wimsett and Craig completed the podium with Joe Criscione recording his best finish of the season in fourth and Arscott up to fifth after electing to start the Prefinal from 21st.

Three tickets to the Rotax Grand Finals were clinched a weekend early, thanks to three dominating performances during the first six rounds of action. Luke Selliken was untouchable in the CRG West Rotax Junior category, as he has been since Chilliwack. The young driver added another weekend sweep, bringing his win streak to six and clinching the Can-Am Rotax Max Challenge title. The ticket to the Rotax Grand Finals will be the first for Selliken, who will represent the Can-Am Karting Challenge and Team USA in New Orleans. The fight all weekend was for second with Blaine Rocha grabbing the position on the opening lap of Saturday’s main event, holding off fellow Californian Christian Brooks – making his first series start. Kyle Wick and Marco Eakins rounded out the top-five in the 13-driver field. Rocha was able to keep the gap closer to Selliken on Sunday, but still came short of challenging for the victory, settling for another runner-up finish with Canadian Jordan Redlin matching his personal best finish of third. Jake Preston was fourth with Eakins recording another fifth place finish.

Joey Wimsett and Derek Wang ran uncontested the Maximum Velocity Performance DD2 and Rolison Performance Group DD2 Masters divisions, clinching their tickets to the Rotax Grand Finals in their respective classes. Both represented the United States previously, with Wang now competing in the Masters division for the first time after contesting the event in the regular DD2 division in 2011. 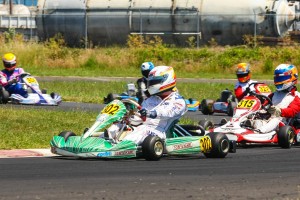 The fight continues to heat up in the Rotax Masters division as Dayna Ward added a third straight victory on the season, with extra fireworks Sunday changing the complexion of the title chase. Ward swept the action Saturday with Chilliwack double winner Mike Daniel trailing. Ward continued to keep the edge on Daniel through Sunday’s qualifying but Daniel responded with a win in the prefinal. They continued to battle in the main event until around the halfway mark when the two made contact. Ward got the better of the result, coming away with the lead and driving to the checkered flag first with Daniel crossing the line second. Officials however penalized Ward for the contact, but Daniel retaliated during the cool down lap and thus both were given a penalty as a result. This placed 70-year old Dennis Ward on the top step of the podium. Dayna Ward was placed in second with Daniel in third.

Sting Ray Robb established himself further as the championship leader in the Wicked Fabrication Mini Max class with two more wins added to his previous three. Robb earned a perfect score on Saturday as he led the entire day, including the fast lap honors in the main event where he drove to a six-second advantage. Round three winner Trenton Sparks was second, ahead of Conner Wick, Zoey Edenholm and Mason Morgan. Sunday saw Robb out front all day once again, securing his fifth victory of the series. David Rafailov kept it close early, but fell back, still managing to hold onto the second position in his first weekend competing in the series. Mathew Morgan was able to climb back to third after falling to fifth at the start, but was penalized for avoidable contact during the race, moving Sparks up to the podium with Jacob Blue Hudson and Mason Morgan rounding out in fifth. 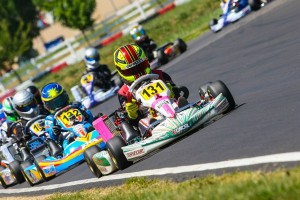 The Neilton Racing Concepts Micro Max division saw its first double weekend winner of the season as Arizona’s Diego LaRoque conquered both main events that saw the entire 10-driver field battling in the lead pack all weekend, providing some of the best racing to date. Max Wright was the early contender on Saturday, posting the fast lap in qualifying and winning the prefinal. Several lead changes between he and LaRoque led to a last lap run at the checkered flag with Diego scoring the victory by just two tenths of a second. Wright settled for second with Canadian Marco Kacic placing a solid third behind the lead duo. LaRoque was the fast driver in qualifying to begin Sunday’s round six action, but round one winner Jordan Novota edged out the competition for the prefinal win. Just as it happened Saturday, LaRoque went toe-to-toe for the victory again, this time exchanging the lead with Novota over the 15-lap run. At the checkered, LaRoque secured his second win of the weekend and the point lead. Novota ran second across the line, just in front of Hayden Hochhalter, recording his first podium finish of the season.

S4 Master Stock Moto action continued to provide great racing for those competing in the Superkarts! USA Can-Am ProKart Challenge portion of the series, welcoming more drivers to the class and the program. Point leader David Whitelaw was the top driver through qualifying and the heat race, but round two winner Ben Johnston came charging early in the main event. Once out front, Johnston drove away to two-second advantage over Whitelaw with Brandon Brock rounding out the podium. Sunday however belonged to Bruce McKean, scoring his first victory of the season in a sweep. McKean came out of the gate quick in qualifying to secure the P1 position. He kept up the speed through the prefinal, leading all 15 laps for the win and carried it the entire distance of the main event to outrun Whitelaw by three seconds. Brock recorded another podium finish with Johnston retiring early. Brady Egger ran uncontested in the S5 Junior Stock Moto division while Dalton Egger paced rookie Andrew Evans in the S2 Semi-Pro Stock Moto class the entire weekend.

The 2013 Can-Am Karting Challenge takes a break during the next few weeks, as many of the series competitors will be taking part in the SKUSA Pro Tour SummerNationals in Colorado and the United States Rotax Grand Nationals in North Carolina in the coming weeks. The series finale is scheduled for the September 20-22 weekend at the South Oregon Karters facility in Medford, Oregon. More information about the event and the entire series can be found at http://www.rotaxcanamprokartchallenge.com