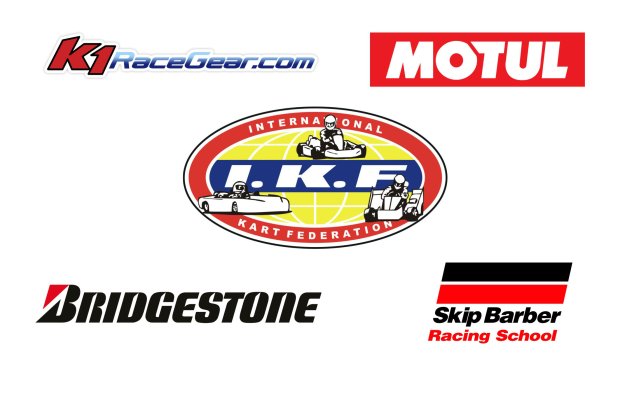 The Motul IKF Region 7 Championship Series brought to you by K1 Race Gear and Bridgestone tires continued their season for races #7 and #8 at the Willow Springs Kart Track. The new K1 Race Gear 2013 champion’s driving suit was on display this weekend, meeting with rave reviews from drivers used to only getting a trophy for their efforts. Weather this weekend was cooler than normal for Willow this time of year with temperatures in the low 90’s and the wind kicking up in the afternoon. On track action was solid as usual. Willow’s decreasing radius turns always make drivers braver than they should be, resulting in pass after pass.

The Willow Springs Kart Club hosted the event, offering up a pro race as the local option class, and a double win bonus if you took top honors in the designated classes on both days. Pro Leopard on Saturday had a 1st place prize of $500 sponsored by Willow Springs Kart Club. 2nd place earned $300 sponsored by Russell Karting, and 3rd place received a set of Bridgestone tires donated by K & P Manufacturing. Sunday’s senior Pro class was Spec PRD with $300 going to the winner thanks to Mack Motorsports. Mack Motorsports also sponsored the 2nd place prize of $200. Third place picked up a set of Bridgestone tires courtesy of K & P Manufacturing. If the same driver won both pro classes they earned an extra $500 via Mike Manning Karting for “doing the double.” $100 contingency bonus were also up for grabs if the 1st place winner was showcasing their engine sticker from Fleming Racing Engines, Mack Motorsports, Mike Manning Karting and P1 Engines. Spec PRD Junior 2 on Sunday also had cash and prizes on the line with 1st place earning $300 from Mack Motorsports, 2nd place $150 from MB2 Raceway, and 3rd scoring a set of tires from K & P Manufacturing. The final money class on the weekend was Spec PRD Junior 1. Willow Springs Kart Club put up $300 to the class winner with Henderson Karting Experience donating a case of Motul Oil to the 2nd place finisher. K & P Manufacturing again generously donated a set of Bridgestone tires to the 3rd place finisher.

The PKS Rookie Comer class again got the ball rolling with Trey Brown securing the first pole of the day. Tanner Hudspeth chased Brown to the line in the prefinal as the only driver able to keep pace. That changed in the final as Marcus Rodriguez stepped up his efforts to challenge Brown in the opening laps. Rodriguez grabbed the hole shot with Brown and Hudspeth dropping in behind him as they headed into the esses. Brown, not accustomed to running in second place regained the top position only a lap later and finished it off with another solid win. Rodriguez finished in 2nd place after a solid performance. Hudspeth finished in 3rd.

Spec PRD Sr. Presented by RLV saw Jordan Robertson dominate the class all weekend. With the pole, and heat race win the final was a mere formality for Robertson. He put nearly 8 seconds into his nearest competitor for the win. Second place was up for grabs for most of the race with Gino Alfonso-Macauley just beating Trevor Sumner. Jeremy Specht was the lone KPV4 driver and solo’d in for the win.

Mike Manning Karting KPV 2 was joined on track by PRD Junior 1. Jake Drew set the pace in KPV with Trey Brown doing the same in PRD. With a late race move in the prefinal, Joshua Early just beat Drew to the finish with Brown scoring the win over Johnny Dressler. In the main event Dressler did the near impossible, handing Brown a defeat, the first one in quite a while. An excellent pass in the early laps earned Dressler a fantastic win. Early followed through with the win in the 20 lap final. From the pole he drove away to the checkered flag. Drew gave chase, but finished 6 seconds down in 2nd place. Colby Dubato finished 3rd.

Henderson Karting Experience Kid Kart was a barn burner right down to the finish. Cole Keith Cotham was the pole sitter but Dominic Gorden put in a solid drive to win the prefinal. Gorden led most of the main event, but was dogged lap after lap by Cotham. Cotham made his move on lap nine and held it for the remaining few laps to score the race win. Chance Gibson was not quite up to the leaders pace but finished in 3rd.

Fleming Racing Engines KPV 1 was once again the Trey Brown show. Elijah Potter showed speed in qualifying and in the prefinal, but Brown was too quick in the final. Carson Mallett took the fight to Potter in the final for 2nd place, making a pass down the back straight a few laps into the contest. He was able to maintain the runner’s up position but not able to challenge Brown for overall victory.

Spec PRD Jr. 2 brought to you by RLV was the largest class of the day and saw Christian Brooks grab the pole over Nick Ramirez and Owen Lloyd. Brooks and Ramirez remained fast throughout the prefinal and right into the final. Brooks led every lap of the 20 lap contest, but Ramirez was glued to his bumper the entire time waiting for a mistake. Brooks rarely falters once out front and brought it home for another series win. Ramirez continues to run up front and secured another favorable finish with 2nd place. Lloyd and Jake Drew battled early for 3rd place, but Nathan Seegrist was picking off a least one driver per lap on his charge forward. By halfway Seegrist was up past Lloyd and into 3rd place for good, finishing 8 seconds down on the lead duo.

PRO Leopard saw three drivers battle it out for the cash and valuable prizes. Jordan Robertson set the pace all day long with Maya Gutierrez and Trevor Sumner giving chase. Robertson was quickest in every session. Gutierrez stayed close in the prefinal, but Robertson kicked it up a notch in the final to secure an easy win. Robertson earned $500 for the win and picked up $100 of contingency cash on top of it. Plus it set him up nicely to try for the double on Sunday. Gutierrez scored $300 for her 2nd place finish and Sumner got a set of tires for his run to 3rd.

Grand Products Rookie Comer saw a shakeup at the front of the field in qualifying with Tanner Hudspeth stealing the pole position, running a lap 3 tenths quicker than he did in Saturday’s session. Hudspeth kept the pressure on in the heat race to start the final from the pole position. Trey Brown and Carson Mallett were just not up to the pace of Hudspeth and were left battling for 2nd place well behind the winner. Hudspeth was on fire, leading every lap on his way to the checkered flag and his first win of the weekend.

RLV Spec PRD Sr. was the second half of the pro classes. If Jordan Robertson was able to take the win it meant an extra $500 heading his way from Mike Manning Karting. It was easy money for Robertson who snagged the pole, won the prefinal and destroyed the pack in the final. Roberson’s efforts paid off with his total take on the weekend an impressive $1500. Trevor Sumner picked up $300 for his 2nd place finish while Gino Alphonso-Macauley scored a set of tires for 3rd.

Empire Karts KPV 2 again paired up with PRD Junior 1 on track. Colby Dubato laid down a flyer in KPV qualifying for the pole position. Yesterday’s winner Joshua Early slotted in for P2. Gary Lyles was the pole sitter ahead of Johnny Dressler and Trey Brown in PRD. The running order shifted in the prefinal with Early and Dressler landing the wins. The final was a repeat performance as Early hammered out a pace too quick for any others to match. Jake Drew ran in 2nd place the entire contest with Dubato dropping out early. Dressler and Lyles went toe to toe in the final with Dressler taking the checkered flag first. His win earned him $300 bucks, while Lyles 2nd place finish nabbed him a case of Motul oil. Brown got a new set of Bridgestone tires for his 3rd.

Courtney Concepts Kid Karts threw down in the prefinal with Cole Keith Cotham, Chance Gibson, and Dominic Gorden storming to the checkered flag for a photo finish. The main event was nearly as exciting with the top five drivers all running lap times within a few tenths of each other. Gorden, Gibson and Cotham battled early in the 12 lap final but Rylee Martinez was charging up through the field. It didn’t take long before Martinez found the front and never looked back. The battle continued all around her, but she picked up the win over Gorden and Gibson.

Fleming Racing Engines KPV 1 saw Trey Brown best Elijah Potter by just a tenth in qualifying. Brown secured the pole for the main event after gapping Carson Mallett and the rest of the field by 8 seconds in the prefinal. Brown went flag to flag for the win in the 20 lap main event. Mallett ran all race in 2nd place while Tanner Hudspeth did the same in 3rd.

With prize money on the line and valuable points in the Skip Barber challenge up for grabs it was quick Nick Ramirez who secured the pole in RLV Spec PRD Jr. Ramirez and Nathan Seegrist topped the charts after the prefinal, setting the stage for a show down in the main event. Ramirez took the green flag, the white flag and the checkered flag all in first place. It was his only win on the weekend and he did it with great finesse. Christian Brooks, the Saturday winner suffered a DQ in the prefinal but bounced back in the final with a great drive up to second place. Seegrist’s day was done early in the affair, but Owen Lloyd stepped it up to finish in 3rd place.

Special thanks to this weekend’s associate sponsors P1 Engines, Race Kart Engineering, and Tru Tech Engines. The Motul IKF Region 7 Championship Series will be off in the month of July, but returns in late August for the 5th event of the season. Join the racers at the Santa Maria Kart Track August 30th through September 1st for rounds 9 and 10. The IKF Skip Barber Challenge winners will be determined at this event. For everything Region 7 please check out www.ikfkarting-r7.com