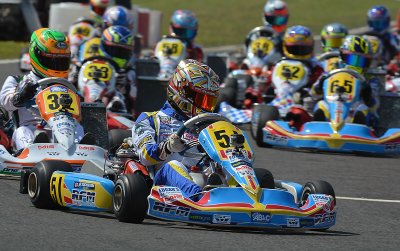 Passing the halfway mark for the series at an immaculately presented Larkhall circuit in Scotland, the KZ1 gearbox class was absent, having only three rounds this year. It will return at the Shenington last round. Hot sunshine was the order for Sunday’s racing, too hot for some.

KF Junior (MSA Junior British Kart Championship)
Daniel Ticktum dominated the Scottish round of the series, topping timed qualifying and winning both heats and both finals. His RFM team-mates Jehan Daravula and Enaam Ahmed were always the closest to him but Jamie Caroline suffered a five place penalty whilst Philip Rawson went to the back in the first heat. Josh Smith only managed one lap but made fourth in the second heat whilst Caroline, Harrison Newey and Rawson all fell to the back. Will Stowell took an exclusion for his driving. In a curiously static first final Jehan Daruvala and Enaam Ahmed followed Ticktum all the way with Ross Martin remaining fourth. Josh Smith capitalised on the fight between Dean MacDonald and Harrison Newey to snatch fifth on the last corner. Caroline and Daniel McAuley had an on track clash, neither finishing. Ahmed was swift to depose Daruvala at the beginning of the second final, the Indian driver not quite close enough to counter-attack but still some 8s clear of Martin and MacDonald. Ticktum just held Ahmed at bay on the last lap. 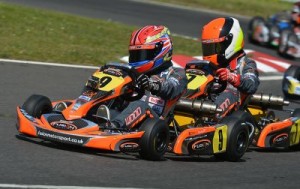 IAME Cadet (MSA British Cadet Kart Championship)
Tom Wood had a clean sweep in Scotland whilst championship leader Oliver York could only manage a tenth and seventh. Although Wood was only tenth in the timed qualifying he won a heat to line up third on the first final grid behind Kiern Jewiss and Alex Quinn. A good start put him second, immediately leap-frogging Jewiss for a lead he would keep until the chequer. Behind him Sean Butcher and Alex Quinn traded second until Herbie Grout – storming up from grid 12 – split them at the flag. Grout then slipped into second at the start of the second final but soon Wood had to work hard when Butcher relieved him of the lead twice, the last time with eight laps to run. Lewis Thompson had not even started as his kart let him down on the formation lap and William Pettit stopped with five laps to run. Butcher had fallen to ninth at the start so did well to come back to the front. Wood retrieved the position with a couple of laps in hand, Quinn deposing Butcher at the end as Grout ran wide at the last corner. Edgar fell back to tenth with a slipping clutch. 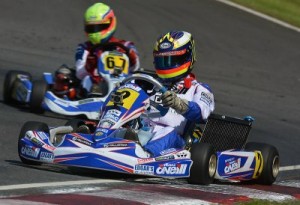 Formula KGP National Championship
Although Danny Keirle took top spot in the timed qualifying despite suffering from food poisoning, from there on in Bobby Game dominated, winning both heats and both finals. Roy Johnson and Toby Sowery received setbacks in the second heat with technical non-compliance exclusions for slipping clutches. Keirle was still handily placed on grid 3 for the first final after being unceremoniously nudged out of the second heat lead by Game. Denis Gorman fell to fourth at the start from the outside front row of the first final but soon leapfrogged Robbie Dalgleish. Thereafter the top three remained with Game unchallenged whilst Keirle had to hold off Gorman. Stefan Di Resta’s fourth place was soon taken away with a brilliant driver through half the field from Dan Stocks, whilst Sowery stormed up to briefly take fourth, having to settle for fifth. As Game had to work hard to maintain his lights to flag victory, Mark Litchfield was slicing through from the back after a final one non-finish due to an engine failure. Once in touch he leapfrogged all but Game. Keirle snatched third over Sowery after a lunge on Litchfield lost him momentum. Johnson, who also after a final one DNF, took fifth when Davis lost the place with an exclusion for driving standards. 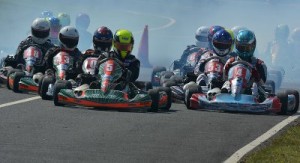 TKM Extreme (ABkC National Championship)
From being fastest in timed qualifying, through winning both the heats, Will Van Es capitalised on his first final pole for the win by 4s. Rory Pringle and Joe Forsdyke had been closest in the time trials, each taking a heat second place. Pringle lost second to Forsdyke in the first final, then Luke Graver stormed into second although Pringle retrieved third from Forsdyke by the flag. A massive battle ensued for the second final win with Van Es, Graver and Pringle all trading the lead in a six kart train. After two brief spells in front Pringle succumbed to Graver, who held on until the chequer, whilst Forsdyke snatched second at the end. Van Es continues to hold the top of the points table from Charlie Bruce-White, the latter having a very subdued round with an eighth and sixteenth. 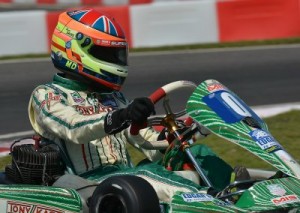 Junior TKM (ABkC National Championship)
The record shows Matt Davies and Stephen Letts sharing the victories, but Davies is still roaring away with the championship lead. He topped timed qualifying over Letts and Tom Owen whilst Daniel Baybutt was taken off and when weighed without some of his race kit was underweight, so having to come from the back of the heat grids. Davies and Letts shared the honours in these, but Baybutt had showed his pace for second in the first one. Letts didn’t finish that first heat, whilst Cameron Sharpe was excluded for driving standards. With Letts and Baybutt starting the first final on grid 9 and 10, Davies had a fairly free run to the chequer as the fast pair stormed up behind but 6s adrift. Baybutt grabbed the second final lead and held it for 18 of the 24 laps, succumbing to Letts with Davies and Alex McRoberts soon following when Dino Lee and Baybutt clashed. Lee stopped soon after whilst Baybutt had to be content with tenth. McRoberts closed the gap to Davies and Letts right down, but the front pair were in no mood to leave any gaps in their strong defence.