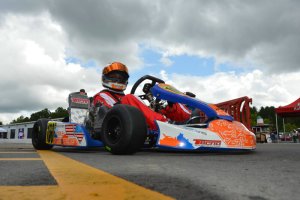 Looking to prepare for the 2013 Rotax Max Challenge United States Grand Nationals, Florida-based driver Michael Benyahia would head to the GoPro Motorplex in Mooresville, North Carolina this past weekend. Looking to get his Techno chassis up to speed, Benyahia had the opportunity to test in both wet and dry conditions, as the forecast would change throughout the weekend. When all was said and done, Michael would qualify on the front row, win one of two prefinals, claim a third place podium result and a pair of top-ten finishes.

“My goal was to come to Mooresville and learn the track,” expressed Michael Benyahia post race. “The race was more of a test for myself and the chassis to ensure we were up to speed to compete at the front of the field. At the end of the weekend, we are very confident heading to one of the largest events in the United States in a few weeks time.”

Proving to be very quick on the unofficial test days leading up to the event, Benyahia really turned up the wick on Saturday morning when the sessions became important. Qualifying on the outside of row one during Saturday morning’s timed session, Michael went to work in the prefinal and took the top spot in the first official wheel-to-wheel action of the weekend.

Looking to keep his momentum rolling in the final, Michael and the rest of the Rotax Mini Max drivers would be in a mad scramble to switch to a wet weather setup as rain moved into the area. Starting the race from the inside of the front row, Michael would struggle slightly with a front-end issue on his kart. With a melee of karts entering corner one, Benyahia would endure contact that would hinder his progress. When the race had finally ended, the Techno pilot would end the day in sixth.

Back to the GoPro Motorplex on Sunday morning, Benyahia would claim the sixth quickest time in the qualifying session, as he would still lack the necessary grip to put down a pole-winning lap. Falling to seventh in the prefinal, Benyahia would take advantage of a late race incident in the main event to garner a third place podium result.

Never wanting to give up a competitive advantage, Tecno Kart Racing Team will be on site at the Rotax Max Challenge United States Grand Nationals to provide Michael with a brand new chassis as well as assist with setup and provide trackside support.

Michael would like to thank his tuner and driver coach Jesus Rios for all of his hard work and effort throughout 2013, Ariel Castro of AM Engines for on track engine support, Tecno Kart Racing as well as all of his family and friends.

For more information on Michael Benyahia please email ben@ccmcellular.com or visit him online at http://www.michaelbenyahia.com