Micro Max Division –
Tyler Gonzalez had an up and down day before securing the Micro Max division win in the 18-lap final. After setting quick time in qualifying with a 55.749-second lap, Gonzalez was disqualified following the pre-final for failing technical inspection. Derek Carmenate was able to win the 14-lap pre-final. However, Gonzalez drove an impressive race to advance his way through the field from last to finish first in the final.

It wasn’t an easy drive for Gonzalez as he fought off a tough group of Micro Max drivers. The top-four drivers of Gonzalez, Nicholas D’Orlando, Harry Coulton and Carmenate were bumper-to-bumper and swapping for position, each taking the lead in various corners of the track. On the last lap, what was a four-kart battle for the lead became a two-kart battle for the win between Gonzalez and D’Orlando. Gonzalez prevailed to take the win, followed by D’Orlando in second and Coulton in third.

Mini Max Division –
Michael D’Orlando walked away with the win in the Mini Max division 18-lap final event after a brief, but heavy rain storm soaked the track. The rain fell just as the Mini Max drivers were gridding for their final race. Race officials gave a 15-minute break for the option to switch to rain tires.

The unexpected rain storm didn’t damper the driving ability of these young competitors as they moved through the rain-soaked and difficult chicane in Turn One without any incidents. It was Kollin Stuart who was mastering the wet track conditions for the first half of the race. However, as the track began to dry off, D’Orlando made a pass on Stuart with five laps to go. D’Orlando checked away from the field, crossing the line five seconds in front of second place, Stuart, and the third place of Nick Brueckner.

Masters Max Division –
Justin Halliday took home the Masters Max division win in the 24-lap final, following a smart strategy call to leave on slick tires, while the majority of the field switched to their rain tires. The race surface was almost completely dry after only a few laps into the Masters Max final. Halliday easily drove past leader, Falcone, who was on rain tires. Halliday made the pass for the lead with 15 laps to go and drove away to a dominating win and 16.116-second margin of victory. Pole sitter and pre-final winner, Jason Leslie, finished in second place, followed by Todd Meyer in third.

Junior Max Division –
Trenton Estep drove his way to the top step of the Junior Max division podium, following some hard, close racing between the field of 24 drivers. Pole sitter, Jack Weprin, took charge of the race early on with a power move for the lead exiting the last turn. However, pre-final winner, Juan Correa, began to close in on Weprin with 18 laps to go and on lap nine took the lead from Weprin. When slower, lap traffic caused confusion among the leaders, Weprin was able to maneuver back around Correa for the top position. Estep made his way into the mix with one lap to go, making a last-lap pass on Weprin in the ‘double right’ corners to steal the win. Weprin finished second and Correa in third.

Senior Max Division –
AJ Myers stole the win in the Senior Max division final, as tempers flew following a last-lap altercation between drivers, Andrew Palmer and Jacob Donald. Donald shot off to an early and strong lead on the field. However, with five laps to go, Palmer turned up the heat and began to reel in Donald’s lead, all while running the fastest laps of the race.

Palmer made it to Donald’s bumper by the final lap of the race and attempted a pass for the lead on the straightway before the hairpin turn. Palmer and Donald made contact, went airborne and their karts landed tangled together off track. Myers was able to sneak by and went on to cross the line in first. Roger Ralston Jr. and Dan Roper followed behind in second and third, respectively. 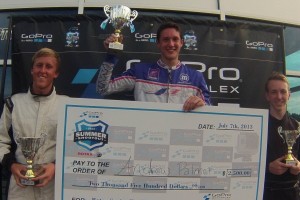 Senior Max Division –
Palmer won the 24-lap Senior Max final in dominating fashion, 1.338 seconds over second place. Round One winner, AJ Myers, took the lead early on, but after nine laps Palmer was clocking the fastest laps on the track and slowly reeling in Myers. Palmer made the pass on Myers for the lead in the entry of turn one with nine laps to go and began to put distance between Myers and himself. Myers was able to hang on for a second place finish and Roger Ralston Jr. rounded out the top three.

Micro Max Division –
Nicholas D’Orlando took home the win in the 18-lap Micro Max final. After a nerve-wracking flip on only lap one involving Dante Tekampe brought out the red flag, the race reverted back to a complete restart. Luckily, all drivers involved were uninjured.

The Micro Max division went back green flag racing with the top-five drivers nose-to-tail fighting for the lead the majority of the race. With eight laps to go, the race between the top-three of Tyler Gonzalez, Harry Coulton and D’Orlando began to heat up. D’Orlando made his pass on Gonzalez for the lead in the hairpin turn coming to the white flag. Gonzalez attempted a cross over move, but couldn’t complete the pass, allowing Coulton to get by as well. D’Orlando walked away with the win, followed by Coulton and Gonzalez.

Mini Max Division –
David Malukas scored the win in the Mini Max division final, following an equally tense race which ended in a last-lap accident, bringing out the red flag for a second time. Luckily, all drivers were able to walk away from this accident as well.

Enzo Fittipaldi got a strong start and early lead, but Round One winner, Michael D’Orlando was right on his bumper. D’Orlando was able to complete a pass on Fittipaldi, dropping Fittipaldi back to third position with 11 laps to go. Malukas moved into second position and made quick work of D’Orlando to pass for the lead by halfway. However, with three laps to go, D’Orlando made a pass back for the lead entering turn one. Malukas didn’t give up, making yet another pass to move himself back into the lead with one lap to go. Following the last lap incident, the field reverted back to the last scored lap, giving Malukas the win, D’Orlando second and Michael Benyahia third.

Junior Max Division –
Jack Weprin had a perfect day, winning the Junior Max division 24-lap final, as well as the pole in qualifying and 18-lap pre-final race. Weprin shot off to an early lead on the field and it looked as if Juan Correa was the only driver that could challenge Weprin’s dominating run. Correa was never able to reel in Weprin’s more than a second lead on the field and he fell to third after a last-lap pass by Thomas Issa for second position. Correa was able to hang on to finish in third position.

Masters Max Division –
Scott Falcone dominated the Masters Max division by winning the pole in qualifying, the 18-lap pre-final, as well as the 24-lap final. Justin Halliday finished in second and Todd Meyer rounded out the top-three.