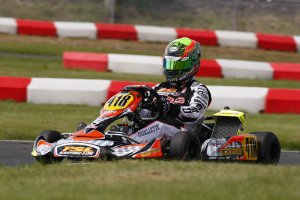 Pier-Luc Ouellette was victorious in his return to ECKC competition, taking top honours in Rotax DD2 on Sunday while placing second on Saturday
(Photo: PSL Karting)

Returning to Eastern Canadian Karting Championship (ECKC) action with one of the biggest names in karting, Team PSL Karting left Goodwood Kartways with one win via two-time Rotax World Champion Pier-Luc Ouellette. Amid the largest ECKC event to date, the paddock was abuzz with the return of PLO, who didn’t disappoint in either of his two classes entered. The entire Team PSL Karting was also on top of their game at the 0.765-mile facility, scoring six top-fives and another six top-tens during the two days of intense ECKC competition, and gained track time at the Goodwood facility ahead of the Canadian Karting Championships later this summer.

“Despite the variety of classes under our tent, we were are able to share data and collectively move the team forward,” explained Dominic Labrecque, President of PSL Karting. “For us, like most drivers, this round served as part of the ECKC points championships, but more importantly, we were able to gather valuable information for the Canadian Nationals. Without a doubt, that race (CDN Nats) will be the toughest of the entire season.”

After being out of a kart for seven months, Ouellette recently made his return to the driver’s seat in preparation for his first ECKC event of 2013. Pulling double-duty in both Rotax DD2 and Rotax Senior action at the Goodwood round, Ouellette proved why he is a two-time world champ after being at the top of the charts in both categories.

In DD2, Ouellette would start his event off right, clocking fast lap to take the Saturday pole position. In a repeat of action from 2012, where Ouellette battled the entire series with a fellow world champion, the karting phenom again found himself in a DD2 duel. Falling to second in the prefinal race, Ouellette came up shy of the win despite being the fastest kart on the track. In an all-out war for the final victory, Ouellette battled for the win but came up a mere 0.058 seconds shy. Back on track Sunday, Ouellette would be unstoppable, as he dominated with his second pole position on the weekend, and taking the win and fast lap honours in both the prefinal and final to once again stand atop the DD2 blocks. Alessandro Bizzotto would add two top-ten results to Team PSL Karting’s tally with sixth and seventh place results in the gearbox class.

Back on track in Rotax Senior, Ouellette would show the strength of the PSL/CRG package as he clocked second quick in qualifying against a stout field of 35. Early contact in the prefinal quickly voided his qualifying effort, with Ouellette posting tenth after the 15-lap race before coming back to post fifth in the day’s final. Sunday saw the multi-time Team Canada member post fifth in qualifying and the prefinal, as well as earn fast lap honours. Ouellette then put Team PSL Karting back on the podium after crossing second in the final, just three tenths back. Two other pilots would contest Rotax Senior in PSL/CRG colours, with Marc-Andre Levesque and Nathan Kelly battling in the ultra-competitive class. After posting mid-pack results on Saturday, the duo would improve on Sunday with both placing in the top-ten. Levesque would cross the stripe in eighth with Kelly just behind in ninth.

“Coming into rounds three and four, we were feeling very confident of the Senior Max direction,” noted PSL Karting Team Manager Andrew Campbell. “Pier-Luc and tuner Coy worked hard to make some real development in the last few weeks, and I believe the proof was in our results. At the moment, we are content with CRG’s latest chassis production, and will continue to improve and innovate on our exiting platform.”

DD2 Masters pilot Luc Sauriol accounted for two top-fives, as the 2006 Rotax Masters World Champion drove to a third place podium result in Saturday’s final. Posting second in Sunday’s prefinal, Sauriol battled for the win in the final but had to settle for fourth once the checkered flag flew.

“Now, we will move on to the US Nationals and Petite Monaco races, where we will split our management and serve double duty at both events,” concluded Labrecque. “We will team with PSL Atlantic for US Nats, with a full tent of nationally ranked drivers.”

Team PSL Karting will next take on ECKC action and act as host during the famed Monaco of Trois-Rivieres street race event August 4, with their next on track action in Canada scheduled for July 13-14 at Karting Grand-Mere for round three of the Coupe du Quebec series. The US Rotax Grand Nationals are slated for July 31 to August 3 in Mooresville, North Carolina with the Canadian Karting Championships set for August 21-25 at Goodwood Kartways.