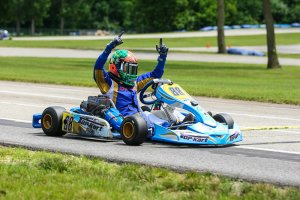 Again displaying a dominant effort in World Karting Association (WKA) Manufacturers Cup action, Top Kart USA would leave the Jet Karting of MRP facility in South Bend, Indiana with a bevy of hardware during the Top Kart USA Grand Nationals. Claiming a staggering ten pole positions and earning an impressive four Grand National Eagle trophies, the 2012 Manufacturers Cup award winner once again was the team and chassis to beat while in Northern Indiana.

Racing action on Saturday would see Emerson Reed utilize his lightning-quick kart to drive to victory in the Yamaha Junior class. Scoring the race win by six tenths, Reed earned a coveted Grand National Eagle with his effort. TaG Masters point leader Scott Ferris would again be the dominant force in racing action, claiming yet another victory in the class and adding Grand National Eagle trophy winner to his credits.

Saturday would also see female pilot Julia Boos make an outstanding run for the win in KPP Junior during a downpour in the day’s final. Settling for second once the checkered flag flew, Boos celebrated her podium result with her fellow Top Kart USA teammates.

Team drivers would add an additional four pole positions during Sunday’s action. Patrick Olsen would make it four fast times on the weekend after claiming top spot again in both Yamaha Senior and KPP Senior. Cadet standout Zach Holden was on top of the Yamaha Sportsman time sheets after his qualifying session with Alex Kardashian displaying a breakout performance with his quick time in KPP Junior to make it ten total poles for Top Kart USA.

Completing a successful run at the Top Kart USA Grand Nationals event, the team would garner two additional wins on Sunday to make it four total Grand National Eagles earned on the weekend. New Top Kart recruit Dakota Pesek would claim the victory in his first event with the team and chassis brand, and extend his points lead in Yamaha Senior. Scott Ferris again topped the blocks in TaG Masters, collecting two of the coveted Grand National Eagles while in South Bend.

“Although we had a countless amount of pole position qualifying times, lady luck just wasn’t on our side for the conclusion of all of the finals,” noted Top Kart USA’s Billy McLaughlin Jr. “Still, four Grand National Eagles is quite the accomplishment and shows the strength of our team and the Top Kart product. Congratulations to our drivers who were able to walk away with a trophy, or two! It is one that every karter wants in their trophy case.”

With a website now complete, further information on Top Kart USA, McLaughlin Motorsports and Motorama Kart Parts can be obtained by contacting their offices at 317.870.3122 or visiting them online at http://www.TopKartUSA.net.