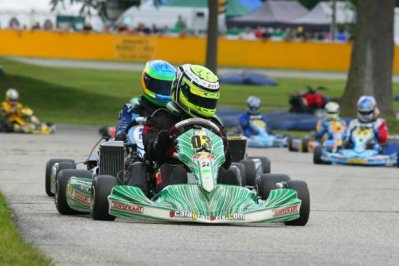 After years of trying Jonathan Kotyk won his first WKA Mazda / Bridgestone Manufacturers Cup Series final in May at New Castle Motorsports Park. At JET Karting at this past weekend’s Top Kart USA Grand Nationals, Kotyk backed up his first-ever national win with four main event victories in the four classes he entered.

Kotyk, an OGP Tony Kart racer out of Oviedo, Fla., swept the Komet Pro main events and raced his Rotax-powered mount to a sweep of the TaG Senior features to net the impressive four-win weekend.

Kotyk became only the second driver in 2013 Man Cup competition to win four races in a weekend. Brandon Lemke accomplished the feat at New Castle in the Junior Sportsman category.

The Kotyk team, privateers racing out of a small trailer and not under a major team’s tent, left South Bend with four prestigious Grand National Eagle trophies and $300 as the overall winner in Komet Pro, marking the second straight Man Cup national Kotyk has earned that award. Kotyk also now has a commanding lead in Komet Pro point standings and the inside shot on the $2,000 and new KPV engine kit year-end prize package.

“We knew the Rotax was good (at South Bend) last year so we figured we’d have a good package coming into the weekend,” Kotyk said Sunday afternoon. “I thought Chelootz and Giessen might get together on that last lap, and I was just sitting there waiting for it. It worked out great; I have to thank my dad, OGP, Tony Kart and everyone who helps with this effort. We’re really starting to hit on all cylinders.” 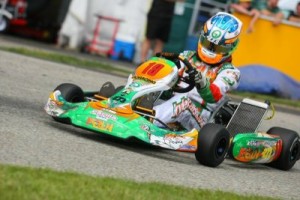 Chelootz shot to the inside of Giessen in turn nine, looking for the inside pass and the Grand National win. Chelootz’s right-front made contact with Giessen’s left-rear, setting both karts sideways and allowing Kotyk to sneak past on the inside and take the big win and a sweep of TaG Senior.

Lemke scored the hat trick and made it seven wins in the last two Man Cup outings to solidify himself as the hottest Sportsman racer in WKA.

The Merlin pilot swept the Yamaha Sportsman main events and took one of two in Cadet Sportsman to pick up the three-win weekend. Lemke, out of Eagle, Wis., beat Zach Holden to the stripe in both Yamaha mains. He nearly swept Cadet; after winning Saturday’s Cadet contest over Anthony Gangi Jr., Lemke crossed the stripe first in Cadet Sportsman 2 but the win was overturned as Lemke made contact with David Malukas in turn nine on the final lap. Officials penalized Lemke for the contact, giving Malukas his only triumph of the weekend.

Merlin racer Austin Schaff proved he’s one of the best Sportsman racers in the country when the track is wet. In a rain-drenched Komet Sportsman 1 race late Saturday, Schaff dominated the likes of Lemke, Malukas, Gangi and Holden on his way to the win. Lemke took second with young Giovanni Bromante third.

Mike McAndrews made it five wins in six starts in Komet Junior in 2013 with another sweep of the division. McAndrwes won Saturday’s contest in the rain when he was one of only two racers to go out on rain tires. The on-and-off rain showers had teams second-guessing and McAndrews and second-place finisher Julia Boos were the only two to stay on rains. 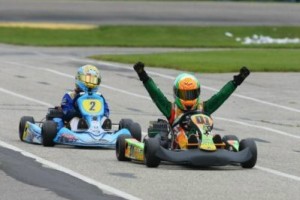 McAndrews returned Sunday to wheel his Birel to the Komet Junior 2 win over Grant Quinlan and point-leader Austin McCusker.

Quinlan gave Man Cup fans one of the most impressive races in recent memory when he started 20th in Sunday’s Yamaha Junior main and passed 19 karts on his way to the win. Quinlan overtook Brandon Jarsocrak with about five laps left before pulling away for the big win. Jarsocrak was second and Matt Solarczyk third.

On Saturday, Emerson Reed scored his first Man Cup win of the season in Yamaha Junior 1. Reed wheeled his Top Kart to the victory over Jarsocrak and Solarczyk.

Sam Cate and Dakota Pesek split the Yamaha Senior mains. Cate dominated on his Tony Kart on Saturday, taking the win by a wide margin over Olivia Horn, who had the best Man Cup run of her career in the second-place effort.

Horn and Cate finished a disappointing sixth and seventh in Sunday’s Yamaha Senior final, while Pesek made a late-race pass on Chase Jones to score the Grand National win. Jones looked to have the race in hand until Pesek closed late and overtook the fellow Top Kart driver with one lap remaining. Jones held on for second with Patrick Olsen third, making it an all-Top Kart top three.

Kyle Kalish dominated Saturday’s Parilla Senior main event on his Merlin. Kalish finished well ahead of Jacob Knueven and Derek Dignan for the score, his first as a senior driver in WKA Man Cup competition.

Kalish had to return to his Illinois home Sunday morning, leaving the Parilla Senior 2 class wide open. Knueven stepped up to the plate, passing Garrett Johnston in the 18-lap final and racing his Arrow to the chassis make’s only win of the weekend. Johnston was second and California’s Austin Elliott third.

Scott Ferris continued his dominance of TaG Masters. Ferris won both days over Steve Schiewer. Brothers Scot and Kim Carapellatti were the only other entrants in the short four-kart Masters field.

Fineis, from Zionsville, Ind., led most of Sunday’s Rookie final and held on late to best Rodgers and Aiden Harrington, who were both right behind Fineis at the finish. Rookie racing was clean and safe throughout the weekend.

Birel and Tony Kart each won six finals on the weekend to lead the chassis manufacturers. Merlin scored five wins – three from Lemke and one each from Kalish and Schaff – with Top Kart earning four wins. Knueven gave Arrow its lone win. 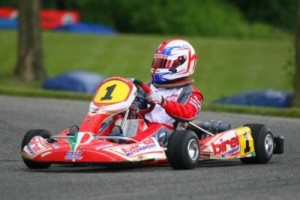 Mike McAndrews is now five for six in Komet Junior in 2013
(Photo: NCRM)

Next up for the Man Cup is round five of the national series, August 16-18, 2013. The Checkered Motorsports / Zero Error Racing Nationals will run at Pittsburgh International Race Complex.

Pre-registration is now open for Pittsburgh Man Cup. Go to http://www.worldkarting.com/downloads/eb-2013/pitt_mc.pdf to view and print the entry form.

Checkered Motorsports, owned and operated by Csaba Bujdoso, is a longtime supporter of the Man Cup Series with its line of PCR chassis and drivers Robert Bujdoso, a multi-time WKA TaG national champion, Andrew Bujdoso, John Paul Southern Jr. and a host of other top shoes.

Zero Error Racing is fairly new to the Man Cup Series but has made a splash in 2013 with their sponsorship of the Zero Error Hard Charger Award, which has awarded new rear axles at New Castle and South Bend to the driver who sets the fastest lap time of the weekend in each of the 11 Man Cup categories.

Zero Error Racing is a leading manufacturer of billet aluminum parts and accessories and has recently embarked on the karting industry while continuing its focus on quarter-midget, junior dragster and soap box derby racing.

Checkered Motorsports and Zero Error are both located in western Pennsylvania and consider PIRC their home track.

WKA is proud to have Checkered Motorsports and Zero Error on board for round five of the 2013 Manufacturers Cup Series.