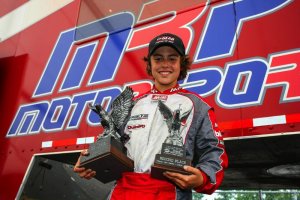 Quinlan started in 20th position in the 23-kart Yamaha Junior 2 main event and passed 19 racers on his way to his second Man Cup win of the season and 21st of his illustrious karting career.

The win put an exclamation point on a terrific weekend for Quinlan and easily his best and most consistent since advancing to the Junior ranks at the 2012 season opener. The 14-year-old Birel racer never finished outside of the top five in four Junior starts, recording finishes of fourth in Komet Junior 1, second in Komet Junior 2, fourth in Yamaha Junior 1 and the win in Yamaha Junior 2.

“It was a really good weekend, that’s for sure,” the humble GQ said Sunday evening. “We’re really happy. I didn’t think we’d ever have enough to get up there and win. It’s hard enough to win a WKA national race when you start up front. I just have to thank the Lobaughs and everyone at MRP and of course, my dad, for all the help. The kart was on a rail and it was one of the most fun races I’ve been in.”

Quinlan’s success at this past weekend’s Manufacturers Cup show was a continuation of an outstanding three weeks for the Maidstone, Ontario, racer.

A week later Grant switched gears and returned to the wheel of his No. 28 U.S. Legends Car at Spartan Speedway in Michigan. Quinlan won his heat and the main event at Spartan, which marked the second consecutive event that he swept the heat and Legends Car feature.

“We had a really good month,” Grant added. “We’ve won with the Legends Car twice and won a national and divisional race with the kart. Now we’re just going to try to keep it going. We have some time off until the next WKA race, so we’ll be focusing on the Legends Car racing in July and early August.”

The next national event on Quinlan’s schedule is round five of the WKA Manufacturers Cup Series, August 16-18 at Pittsburgh International Race Complex. In the meantime Quinlan will compete at Spartan and other track with the Legends Car and possibly race a Route 66 or Great Lakes Series divisional event at Pittsburgh in the weeks leading up to the Man Cup show.

Quinlan now has 12 top-five finishes in the 2013 Manufacturers Cup Series and has only finished outside of the top 10 once, a DNF in Komet Junior 1 at Daytona. When points are calculated through South Bend Quinlan should be top three in both Komet and Yamaha Junior.