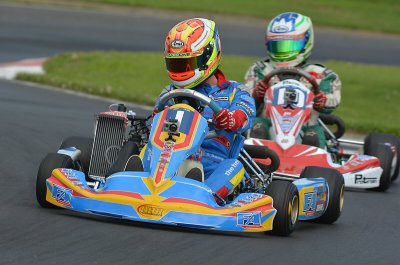 Thrilling races excited the crowd at Britain’s premier circuit, at 1.382km it is the longest the series will visit. However driving standards were poor, especially in Mini Max, and many penalties were issued, some appealed with a little success. Clerk of the Course Alan Bryant warned the drivers, saying: “The driving standards are unacceptable, penalty points need to come back in my view.” The entry list was swelled to over 190 by several foreign guests, taking the chance to prepare for the upcoming EuroMax round at the circuit. And for once the British weather was kind, with two gloriously warm sunny days.

Honda Cadet
Although Rory Hudson topped the first timed session, he only came out ninth overall for the heat grid classification as Myles Apps and Kiern Jewiss were much faster. Hudson’s day got worse with a 5 place heat penalty, as did Thomas Pegram, whilst Morgan Porter was excluded along with Apps. But Apps had his penalty downgraded to 5 places on appeal, so lined up third on the first final grid behind Jewiss and Hayden. All three had enjoyed a heat win. The first final was a classic thriller as Jewiss, Hayden, Harry Thompson, Hudson and Apps all had turns to lead. Jewiss outbraked himself at the second hairpin letting Hayden into second, and a pass on Apps sealed the win for Hayden with Hudson, Jewiss and Apps behind whilst Thompson had clattered back to twelfth. Mark Kimber and Morgan Porter vied for the second final lead, at one time being in an eighteen long kart train headed by Jewiss. He defended vigorously but Hudson found a gap at the second hairpin and set about defending his lead. Matthew Hopcraft helped his Next Gen Motorsport team-mate to push both past Hudson for a one-two, Apps fourth.

Comer Cadet
Tom Wood led over both finish lines but an exclusion left him with only one win. He had nabbed pole for the heats with fastest in timed qualifying over Zachary Robertson and Alex Quinn then won both heats over that same team-mate Quinn. Alex McDade and Sean Butcher shared the second row of the first final grid whilst Jonny Edgar was languishing in sixteenth. Owen Byatt was last on the grid after a heat exclusion. Wood and Quinn enjoyed a mighty advantage on the first lap, and by the finish were over 3s to the rest. Although Quinn tried hard looking for a pass on the last lap it was too risky. Oliver York and McDade were often at the head of the second group, each shuffled back into the pack but then re-grouping. In the end it was McDade who beat York over the line. Edgar fought his way through to sixth. In the second final Quinn emerged from the lead, with Edgar leapfrogging Wood then assuming the lead over the bridge. Defending and heading a long train, Edgar found himself pushed off with Wood receiving the blame as he and Quinn traded the lead. McDade had battled back after a poor start, and relieved Wood of the lead at the second hairpin, only to have Wood just edge him on the finish line. Once Wood was excluded for his misdemeanour it left McDade with the win over William Pettit, York, Robertson and Quinn.

Mini Max
With its 41 starters for once Mini Max was not the biggest class, Junior and senior were both larger, but it still needed a repechage. Connor Hall came out on top of Hugo Bentley Ellis in the timed qualifying, Hall going onto win both his heats, Harrison Thomas the other. Rory Smith and Max Bird both had heat exclusions for driving standards and whilst the poleman in the repechage, Jack Harwood, broke down, Bird won from Stefano Charambolous, Lewis Brown and Darren Keane, Smith was going no further with sixth. Bentley-Ellis snatched a short lived lead at the start of the first final, Hall soon ahead until Dan Zelos came hunting. Hall skittered over the grass and lost three places only to reel in Tom Gamble and Zelos once more. A couple of good passes put him in the driving seat for the chequer, Zelos and Gamble behind. All the action further back resulted in exclusions for Jake Anderson, Alex Sedgwick and Sam McKenzie, whilst Thomas and Josh Smith were both sidelined at the back. Battle re-commenced at the front of the second final between Zelos and Hall, until the O Plated Zelos was shuffled back to fifth. A good recovery brought him within touching distance of Hall at the flag, whilst Bentley-Ellis was elbowed back over the bridge, with Gamble caught out by Zelos at the end. This let Adam Smalley onto the final podium position.

Junior Max
Whilst Josh Price and Alana Taylor beat Tom Harvey to the TQ pole, winning his two heats snared the more important first final pole position for Price. Harvey and Brett Ward won the other heats whilst Taylor fell to grid 22. International KF Junior ace Lando Norris was well in touch on grid 5. Price roared away at the start of the first final, Ben Hingeley briefly taking Norris for second before falling to a distant fifth. Harvey took charge of the dash to reel in Price and the pass put Price back to fourth. Guan Yu Zhou inherited second but left the door wide open for a recovering Price to snatch second, Harvey in charge. For the second final Price, Harvey and Brett Ward forged ahead of Zhou then Harvey was shuffled back to sixth, to start yet another comeback drive. Price fell back, Ward and Zhou traded the lead until Harvey sped into the lead coming over the bridge and defended to the flag. Price retrieved the final podium spot from Ward, Nathan Aston coming fifth but championship leader Ben Hingeley was a lowly 14th.

Senior Max
Oliver Hodgson was easily fastest in the combined timed qualifying, over Harry Webb and Sean Babington whilst the joint championship leader Charlie Eastwood languished in thirteenth. He would only make tenth on the first final grid, where chain off added to his woes. There were no such problems for Hodgson with two heat wins to Babington and Connor Jupp’s one each set them all up for the front rows of the grid, James Singleton in fourth. Hodgson enjoyed a magnificent lights to flag victory, whilst Babington quickly took Jupp but found Hodgson too far distant. Jupp had fallen back to fourth, defending against Singleton, but regrouped to take Thomas Arme for third. In the second final Babington and Jupp ganged up on Hodgson, the latter retrieving second and now only a point down on Babington in the points. Eastwood was quickly up to mid field but his progress stalled for eleventh. Harry Webb made a late charge to secure fifth behind Kyle Fowlie.