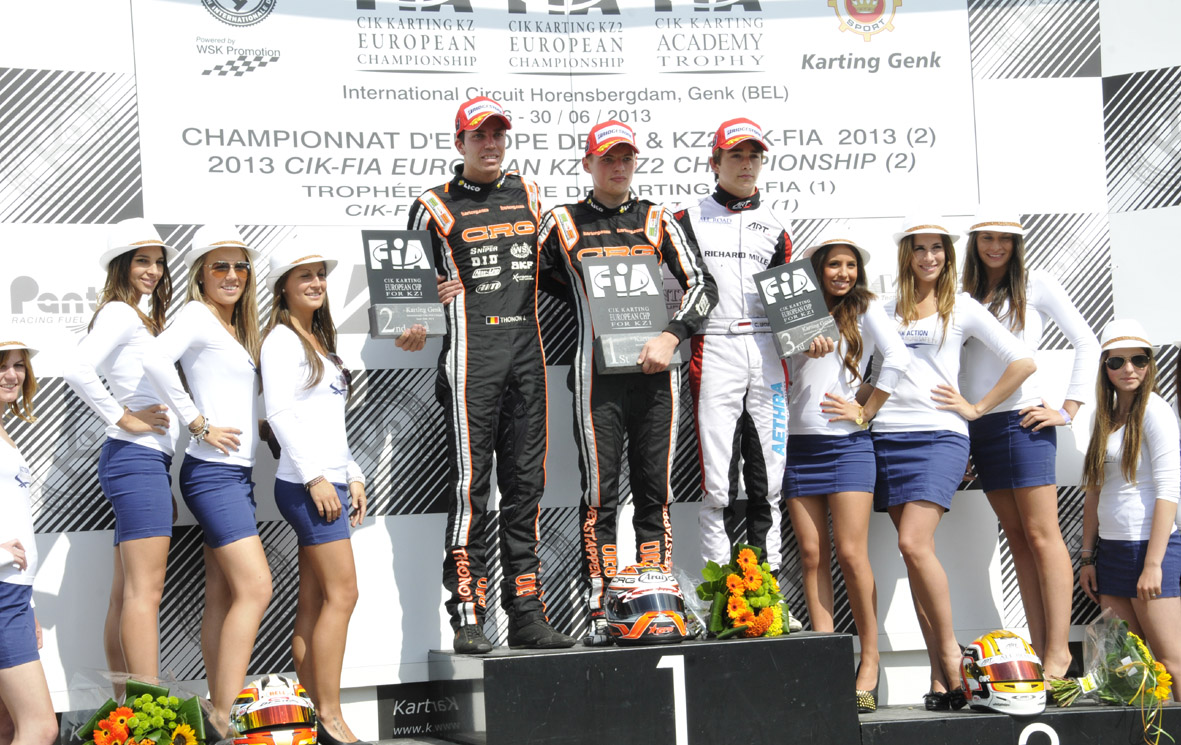 Verstappen on top of the KZ podium
(Photo: Press.net Images)

The closing day of the second and last round of the CIK-FIA European Championship was as spectacular and thrilling as the previous racing days. The eventful and gripping races changed continuously the situation of the Championship standings. The live streaming on the websiteshttp://www.cikfia.tv and http://www.cikfiachampionship.com spread all around the world the news about the Dutch Max Verstappen’s and the Norwegian Emil Antonsen’s victories. Today, they are the new European Champions for the KZ and KZ2 categories. The spectacular images of their triumph will be available on TV, again, thanks to the delayed broadcast of Rai Sport 2 on Tuesday 2nd July, from 21:00h, and then on Friday 5th July, from 23:55h, with the special TV report on the same network.

MAX VERSTAPPEN IS THE NEW CHAMPION OF THE KZ
Max Verstappen (CRG-TM-Bridgestone), who arrived in Genk as the leader of the KZ standings, definitely deserved the title he won. The son of Jos Verstappen, former F1 driver, had to overcome the effects of a crash at the start of one of the heats: this unpredictable stop heavily conditioned him at the start of the final phase. The most skilful Verstappen’s competitors were his teammates: the English Jordon Lennox-Lamb (CRG-Parilla-Bridgestone) and the Dutch Jorrit Pex (CRG-TM-Bridgestone) started from the front row of the Pre-final. The young and talented Dutch driver had to put in his best performance to close the gap. He eventually finished behind Lennox-Lamb. The race of the other favourite driver, the Dutch Bas Lammers (Intrepid-TM-Bridgestone), was not as good: in the final phase he did not manage to keep up with the top drivers, after he, too, had a rather unlucky qualifying phase. So, Verstappen had to gain the leadership as quickly as possible: a mission he accomplished in the Final run this afternoon, when the Championship leader won the decisive race ahead of the Belgian ace Jonathan Thonon (CRG-Maxter-Bridgestone) and the new talent from Monaco Charles Leclerc (ArtGP-TM-Bridgestone). Thonon and Leclerc stepped onto the podium after Lennox-Lamb’s retirement. The Englishman was second at half race. In the Championship, finished behind Verstappen the Italian Ardigò (Tony Kart-Vortex-Bridgestone) and the French Anthony Abbasse, who placed in the Final 5th and 6th respectively.

ANTONSEN: MISSION ACCOMPLISHED. HE IS THE NEW KZ2 CHAMPION
A surprising finale gave the results nobody expected after the first round of the championship in KZ2. Already in the Prefinal, the leader of the championship, the Italian Riccardo Negro (DR-TM-Bridgestone), had to pull over for an engine issue and missed the Final. Also his main rival, Marco Zanchetta (Maranello-TM-Bridgestone), got slowed down in the Prefinal and had to start from the 10th row of the Final. So, the scenario was completely different, after the victory of the Belgian Alexander Schmitz (Tony Kart-Vortex-Bridgestone) in Prefinal 1 – followed by the Croatian Kristijan Habulin (CRG-Modena-Bridgestone) and the Norwegian Emil Antonsen (DR-TM-Bridgestone). The Prefinal 2 was won by the Swedish Joel Johansson (Energy-TM-Bridgestone), ahead of the Czech Jan Midrla (Birel-TM-Bridgestone) and the Dutch Symen Wiggers (CRG-TM-Bridgestone). The favourite for the final victory, so, seemed to be Johansson – who started from the pole position in the Final – . At half race, the Italian Felice Tiene (CRG-TM-Bridgestone) passed Johansson and gained the leadership, which he kept until the end. Here, Antonsen, who had closed the gap with Johansson, managed to overtake the Swedish driver. The loss of the second place cost Johansson the European title. So, it was the Norwegian who eventually won the KZ2 title, right ahead of Johansson and Tiene.

POTTY AND MELGAR WINNERS OF THE ACADEMY
It was a thrilling weekend also for the young drivers of the CIK-FIA Academy Trophy (all beyond the wheel of a Parolin-Fim-Vega), which reached its climax today, with the two Finals. The podium of Race 1 was achieved by the Belgian Maxime Potty, followed by the French Gautier Becq and the Estonian Ralf Aron. In Race 2, the winner was the Spanish Arturo Melgar, followed by Potty (once again on the podium) and the Russian Artem Petrov. American Tazio Torregiani drove to finishes of 16th and 14th in the two races.