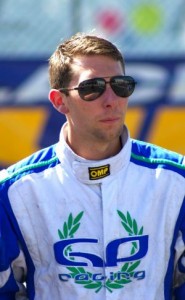 Kiwi karter Daniel Bray at the first round of this year’s CIK-FIA European Championship meeting in Germany in May
(Photo: Fast Company)

A tangle while challenging for second place in his Pre-Final ended Kiwi Daniel Bray’s weekend at the second round of the 2013 CIK-FIA European Kart Championships for KZ and KZ2 at Genk in Belgium on Sunday.

After again being quick in practice on Thursday (seventh in one session and second in the other) and qualifying on Friday (fifth in his group and 14th overall) the 26-year-old KZ2 class driver from Auckland won three of his four qualifying heats and finished second in the other to be ranked fifth overall and start his Pre-Final from P3 on the grid.

That’s as good as it got, however, for the talented works GP/TM/Bridgestone driver from Auckland.

“I didn’t get a very good start,” Bray explained.”I got back up to third but then got involved in a crash with the guy who was in second and broke the front end of the kart.”