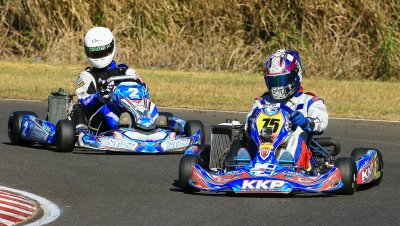 The 2013 Queensland Karting Champions were crowned at Bundaberg’s Dromeside Raceway on Sunday.

With more than 280 competitors converging on the venue from all parts of the country to compete in the 15 categories, the action came thick and fast as they battled centimetres apart at high speed.

Local driver Kel Treseder stamped his authority on the event with victory in the Rotax Heavy category. The multiple-time State and National Champion took the win on his home track ahead of Sydney driver Thomas Macdonald and Gold Coast’s Brendan Nelson.

“It’s a bit of a relief more than anything else to get the win. Being the home town boy I felt as though there was a little bit of pressure to perform this weekend, so it feels good to be able live up to those expectations,” said Treseder, who won the Clubman Heavy category when the event was last held in Bundaberg ten years ago.

“Brendan (Nelson) got the jump on me at the start of the final and I knew that I had to get past him in the early laps. Once I got past him, it was all about putting in perfect laps so that he couldn’t close the gap.”

Treseder narrowly missed out on making it two wins in the one day after an intense dual with reigning National Champion Kris Walton in the Leopard Heavy category. The pair battled for the race lead throughout the 21-lap final, while being shadowed by Townsville’s Luke Jones, before Walton clamed a narrow victory.

Joining Treseder in the winners circle at the event was fellow Bundaberg boy Mason Barbera who proved to be superior in the Clubman Super Heavy class to claim his maiden state championship.

Walton also crossed the line first in the Clubman Heavy category, but a loss of lead ballast weight during the race led to him weighing in under the minimum weight and he was therefore excluded from the results. As a result of Walton’s demise, Sunshine Coast racer Shay Mayes added another State Championship to his list of achievements.

Four-time National Champion Pierce Lehane added another two state championships to his ever-growing resume with victory in both the Leopard Light and Rotax Light categories.

In the Leopard Light class, Lehane emerged unscathed from the opening lap chaos that eliminated the second, third and fourth placed runners. The Redspeed driver was never headed from that point as he crossed the line ahead of Townsville’s Luke Flynn, who charged from position 10 at the start.

Lehane was even more dominant in the Rotax Light category where he put on a clinic for his opposition to secure the victory by more than nine-seconds. Cian Fothergill finished in second place ahead of Brock Plumb.

In the junior ranks, it was Darwin’s Bryce Fullwood who took out the Junior Rotax category while Victorians Jake Klein and Jordan Boys were victorious in the Junior Clubman and Junior National Heavy categories. Toowoomba’s William Brown proved too good for his opposition in the Junior National Light class as Benito Montalbano emerged from an action-packed Cadets final as the winner. Victorian Jordan Caruso made a race-winning pass on the penultimate corner for the win in the Rookies category.

Race Notes: Tony Kart driver Zac Raddatz took full advantage of his pole position to lead the field away during the final of the Rookies category. During the opening half of the race Raddatz opened a ten-kart length lead ahead of Victorian’s Jordan Caruso and Cooper Murray. The trio set the pace throughout the duration of the event while fastest qualifier Harrison Hoey made his way through the field after a turn one incident dropped him well behind the field. Caruso closed the gap on the race leader in the final stages before making a race winning pass on the penultimate corner for the win.

Race Notes: There was plenty of action in turn one of the Leopard Light final with several karts finding themselves on top of each other. The lap one chaos eliminated Josh Crossingham, Brock Plumb, Jarryd Ebzery and also delayed John Grother. While the field sorted themselves out, Pierce Lehane simply drove off into the distance for the win.

Race Notes: KTEQ Rentals-backed driver Nicholas Rowe took advantage of his front row start to lead the Junior Clubman field away in the final. The front four of Rowe, Jake Klein, Jordi Marcon and Harry Hayek were clearly the pace setters throughout the 21-lap race. Klein moved his FA Kart to the front mid-race and held it until the end while Hayek moved into second late in the race.

Race Notes: As has come to be expected in the Cadets category, the action at the front of the field in the Cadets category was intense with a gaggle of karts dicing it out near the front of the field. In the end it came down to a battle of four. With nine laps remaining, the race was halted due to an incident between Sean Bolger and Jacinta Hoey which brought about a red flag stoppage. At the restart, Benito Montalbano led a quartet of karts and when Nathan Herne and Broc Feeney diced over third place it allowed Montalbano and Jack Doohan a slight buffer at the front.

Race Notes: What the Rotax Heavy field may have lack in numbers, it made up for passes with the likes of Kel Tresder, Brendan Nelson, Thomas Macdonald and Rylee Walton dicing it out at the front. Treseder used his local track knowledge to snatch the lead from Nelson early in the race. The pair matched lap times throughout the race before Macdonald showed some impressive late race speed to move into second and close the gap on Treseder but it was not enough to stop the Bundaberg’s own taking the win.

Race Notes: William Brown got the better of the Junior National Light field during the opening laps of the 21-lap final before driving off into the distance. Victorian Champion Reece Sidebottom showed some impressive speed to move his way into second place while Dylan Hollis, Jacob Prestipino, Shaun Costello and Thomas Maxwell diced it out for third.

Race Notes: The Clubman Over 40s final at the Queensland Championships was a Bevan Garioch benefit with the Mackay Kart Torque pilot dominating proceedings. Norm Trost held down second for the majority of the race while Gerard Battye was consistent in third.

Race Notes: There was very little that was going to stop Pierce Lehane from taking victory in the Rotax Light category. He was simply a class above the rest in the 21-lap final and drove off with the championship victory. Cian Fothergill was a solid second in his Monaco kart while Brock Plumb and Josh Crossingham battled it out for third place.

Race Notes: Birel driver Bryce Fullwood led from start to finish to claim his maiden Junior Rotax state championship with a dominant victory in the 21-lap final. James Abela held down second for the duration while Zane Goddard fended off Jordan Boys for fourth spot.

Race Notes: Pre-event favourites Kel Treseder and Kris Walton lived up to all expectations in the Leopard Heavy pre-final with the pair swapping the lead on numerous occasions throughout the opening half of the race. Treseder used every bit of local knowledge to push Walton to the limit, however, the National Champion’s pace prevailed in the end.

Race Notes: Reigning National Champion Jordan Boys was untouchable in the final of the Junior National Heavy category. The Praga driver took a comprehensive victory over Nicholas Rowe, who got the better of a late race battle with Zac Soutar for the runner-up spot.

Race Notes: Cairns CRG driver Lydon Dodge ran inside the top five for the majority of the weekend, but it wasn’t until the final that he made his move to lead the field. After making his way to the front in the early laps, he edged away from his pursuers and left them to battle for second place. As Dodge cruised to victory, Ethan O’Farrell snared second from James Foster on the final lap.

Race Notes: Clubman Super Heavy stalwart Scott Simpson showed the field a clean pair of heels at the start of the final, however, it wasn’t long before local driver Mason Barbera was eyeing off the lead. Barbera had been the pacesetter all throughout the weekend and by mid race, it was evident that this trend would continue in the final. He would eventually cruise to victory while Joshua Herne also found a way past Simpson for second place.

Race Notes: The leading trio in the Clubman Light final ran in close proximity of each other for the majority of the 21-lap final before a battle between Roland Legge and Troy Loeskow allowed Cian Fothergill to open a gap in the closing stages.

Race Notes: Starting from pole position Kris Walton jumped into the lead at the start of the Clubman Heavy final to drive off into the distance. Shay Mayes relieved Chris Farkas of second place mid race. As the race continued Farkas came under pressure from Luke Jones and Daniel Nolan for the final podium position. Despite crossing the line first, Walton was excluded from the results due to weighing in light after he lost a block of lead during the race.