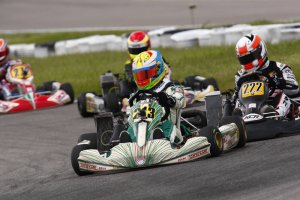 Anthony Tolfa opened the 2013 ECKC with a pair of podiums and is the current Rotax Junior points leader
(Photo: SummitGPKarting.com)

Looking to make their mark in the Canadian karting marketplace, official Tony Kart dealer Summit GP claimed successful results in tricky conditions at the opening round of the Eastern Canadian Karting Championships (ECKC) three weeks ago. Taking place at the ultra fast Mosport Karting facility near Bowmanville, Ontario, the ECKC program will now switch gears and head to the tight and twisty Goodwood Kartways north of Toronto.

“The Summit GP had a good outing at Mosport as team drivers scored podium results, multiple top-five finishes as well as showed the speed in several classes to stand atop the podium,” explained Summit GP Owner Darren White. “The first race of the season is always a challenging one as all the drivers are anxious to get the new series started. Throw a mix bag of weather into the weekend and it led to some long days, but I am proud of everyone in working through the tough conditions and finishing the weekend strong.”

Leading the way at Mosport was Rotax Junior pilot Anthony Tolfa. Showing his skills in both wet and dry competition, the up and coming driver was able to claim a pair of second place finishes and be the most consistent driver in the class. On the strength of his consistency and the support of tuner Mike Maurini, Tolfa will head to rounds three and four of the series with a target placed squarely on his back as the championship point leader and driver to beat.

Female pilot Taegen Poles left Mosport with a pair of top-ten results but her finishes did not show her true speed. As one of the smallest drivers in the Rotax Junior class, Poles held her own throughout the weekend running times that would put her in the top-five. Bad racing luck would hold the young pilot back and she hopes to rebound at Goodwood Kartways and advance up in the point standings.

One of the fastest Rotax Senior drivers in unofficial practice would be Quebec resident Zacharie Scalzo, but wheel-to-wheel action would not be kind to the new Tony Kart driver. After posting a disappointing 13th place finish in Saturday’s rain soaked final, the former Team Canada member was hoping to rebound Sunday and stand on the podium only to be denied by contact early in the event and being forced to retire in the 27th position.

Fellow Rotax Senior drivers Arika White and Matthew Peralto would also see action at Mosport. White would salvage a pair of 22nd place results while Peralto would finish 19th on Saturday and improve to 18th on Sunday.

Dante Lerra would be the lone Summit GP entry in the Rotax DD2 division and would have his work cut out for him battling with multi-time world champions and some of the fastest DD2 pilots North America has to offer. Never one to show fear to others, Lerra progressed through the weekend taking home fifth on Saturday and ninth on Sunday to currently sit seventh in the series point standings.

Just as Lerra was in DD2, Maximilian Horbik would be Summit GP’s sole entry in Rotax Micro Max. After destroying a chassis and finishing 11th on Saturday, Horbik and his crew rented another Tony Kart for Sunday and went to work Saturday evening making sure all was in order. Sunday would see the youngest driver on the Summit GP team score a sixth place finish.

White continued, “We are excited about this weekend’s ECKC event at Goodwood. As a team, we learned a lot at Mosport and several of our drivers have logged multiple test days in preparation for this round. I am confident that we will come home adding race wins and podium results to Summit GP’s resume.”

For more information about the Summit GP racing team, the OTK and Tony Kart chassis line as well as product sales and arrive and drive programs, please visit their website http://www.summitgpkarting.com or contact them by phone at 905.377.5845.