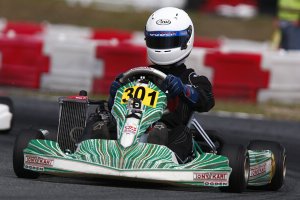 Logging several laps of testing in the past month, Ralston feels as if he is ready for the upcoming Rotax competition
(Photo: Roger Ralston Jr. Racing)

Entering the world of karting less than two years ago, Florida resident and Tony Kart driver Roger Ralston Jr. is set to challenge some of the biggest names in karting. Looking forward to next weekend’s Rotax Summer Shootout at the GoPro Motorplex in Mooresville, North Carolina, Ralston will use the annual event as a tune-up for the upcoming and prestigious United States Rotax Grand Nationals. With invitations to compete at the Rotax Max Challenge Grand Finals later this season, Ralston is hoping to turn some heads and stand on the top step of the podium and gain his position on Team USA.

“The season has been going very well for me,” expressed Ralston. “I am happy with my results and progression in only a year and half in the sport. I am working hard as a driver to provide better feedback to my tuner, better race craft and better conditioning to ensure I am strong at the end of a race. All of these will make me a better driver and continually improve my results for the years to come.”

Starting the year off at the annual Formula Kart Productions Florida Winter Tour, Ralston would see action on all six event weekends competing in both TaG Senior and the ultra-competitive Rotax Senior division. With several strong finishes on the Formula Kart TaG weekends, Ralston was able to march his way to the pointy end of the overall point standings where he finished second in the overall title chase.

Rotax weekends would see a much tougher class of competitors, as drivers from around the world would descend on the Sunshine State to compete. Multi-time world champions, Florida Winter Tour titleholders and some of the world’s top drivers would step into a Rotax Senior kart and Ralston was able to hold his own against them all. Acquiring multiple top-ten results and battling wheel-to-wheel with some of the world’s top drivers, Ralston was happy with his performances and improvement throughout the tour.

Ralston continued, “In 2012, I was barely able to make some races as I was so new to the sport. Now, with a year under my belt, I was quickly able to advance up the running order and place inside the top-ten. As I mentioned before, I will continue my constant improvement and hope to challenge for race wins and podium results as the karting season continues.

For the past couple of months, Ralston has been competing where some of the country’s top drivers race. Showing pace in the Florida Karting Championship Series and most recently, the North Florida Rotax Max Challenge, Ralston travels to these events to not only compete, but learn. While the learning curve continues to go straight north, Ralston’s results do so as well as he has been able to stand on the podium and garner some of the fastest race laps at events throughout Florida.

“Many people are using the Rotax Summer Shootout as a test for the upcoming Grand Nationals,” explained Ralston. “This is not the case for me. We have done a ton of testing and I am going to work hard and try to win this event. Anything else will be unacceptable as I am confident I have put forth the effort to climb to the top step of the podium.”

Looking to obtain a position on Team USA, Ralston will also see action at the United States Rotax Grand Nationals at the same GoPro Motorplex in early August, as well as the Rotax Pan American Championships that will be held later this season.

Roger Ralston Jr. would like to thank his 2013 sponsors for their continued support. A special thank you to DirectView Security Systems as well as his Mom and Dad for believing in him.

For more information on Roger Ralston Jr. and to follow his progress and climb up the motorsports ladder, please visit him online at his Facebook Fan Pagehttp://www.Facebook.com/RogerRalstonJrRacing and through his Twitter and Instagram accounts by searching @RogerRalstonJr. For sponsorship opportunities or information in how to partner with Roger Ralston Jr., please contact him 561.531.1800 or via e-mail to RogerRalstonJr@yahoo.com