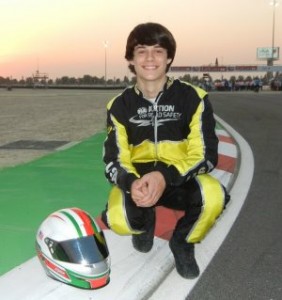 14 year old junior kart racer Tazio Torregiani, from Stamford CT, was entered in the International 2013 CIK FIA Karting Academy Trophy for a second year, as official USA driver. The Academy Trophy is a CIK FIA sanctioned International competition, where several countries are invited each to enter one 13 to 15 year old junior kart driver. The academy drivers receive by drawing lots equal Parolin/Fim KFJ karts, free of charge. The competition will be the supporting series for the CIK FIA Karting European and World Championships, and is divided in three rounds: June 28-30 Genk, Belgium, July 19-21 Ortona Italy, and September 20-22 Varennes France.

“I am very thankful for a second opportunity to compete in the Academy Trophy, Thanks to the ACCUS and WKA for entering me as the American Academy driver, this being my second year, I will be much more confident going into the first round in Genk, and will be looking for strong results all throughout the season” commented Tazio.

Torregiani renewed his FIA International racing license, and will leave for Belgium on Tuesday June 25 for round one. The last races for the young Pilot resulted in two National podiums in the WKA Manufacturer Cup Series, in New Castle Indiana last May. Tazio in 2012 raced with some of the best drivers in the sport, in the CIK FIA Academy Trophy, in the SKUSA Supernationals in Las Vegas, and in the World Karting Association’s Man Cup Series.

Tazio just graduated from middle school and will start High school later this year, and is supported by http://www.NewCountryPorsche.com