The Russell Karting Specialties/L & T Manufacturing Route 66 Sprint Series presented by Bridgestone/Margay and Grand Products held round two on June 15th and 16th at Jet Karting near South Bend, IN. The event was sponsored by Prokup Media Printing Services. 274 entries competed over the weekend on the challenging 11 turn .7 mile track. Brandon Lemke was able to capture all four Sportsman class wins over the weekend in the Yamaha Sportsman and KPV Sportsman classes. Double class winners included Nicolas Martens in Kid Kart and Grant Quinlan in the Yamaha Junior classes.

Also on the bill this weekend was the inaugural QPS Employment Group Yamaha Junior Shootout which paid $500 to win. The weather started out mild on the Friday practice day, however rain moved in for most of the day on Saturday necessitating rain tires for many of the races. Dry weather returned on Sunday with temperatures reaching into the mid 80s. 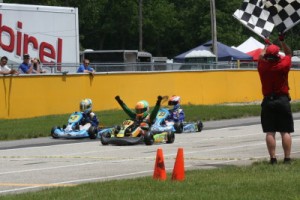 This was the second year that the Route 66 Series has held an event at Jet Karting. Andy Finke and his staff had the facility in top-notch condition for an upcoming run of several big events at their facility. A new addition this year was that the track provided shuttle service running around the perimeter of the track for participants needing a ride to the concession stand or bleachers at the top of the hill.

The first final racing was the RLV Yamaha Senior Lite class with 16 entries. Pre-final winner Adam Crepin and fast qualifier Collin Griffin paced the start under wet conditions. Crepin’s expertise at rain racing allowed him to gradually pull away from the 16 kart field. At the finish, Crepin (Merlin) had pulled out to a four second lead over Griffin with Christian Besasie and Ben Hewitt five seconds back in a tight battle for third place.

The Triple E Sales Yamaha Sportsman I class gridded next with a large field of 24 entries racing on rain tires. Pre-final winner Brandon Lemke took the lead at the start followed by Luke Fineis and Giovanni Bromante. The next pack had Sam Mayer, David Malukas, Austin Schaff and Zach Holden battling for a top five position. Lemke (Merlin) quickly pulled away from the field for a 10 second win over Fineis. Mayer, Bromante and Holden rounded out the top five at the finish.

The Yamaha Junior Heavy class sponsored by Woltjer Racing Engines was up next with 21 entries and the track was dry enough to go back to Bridgestone slicks. Fast qualifier and pre-final winner Grant Quinlan paced the start alongside of Mike McAndrews. Quinlan grabbed the lead into turn one and Killian Keaveny moved from fourth to second place on lap one. McAndrews dropped out on lap one and Kenlen Morse moved into the top three. Keaveny and Quinlan swapped the lead position several times with Keaveny (Top Kart) taking the win by just .198 seconds. Morse, Adam Sturgill and Emily Hurlbert rounded out the top five. 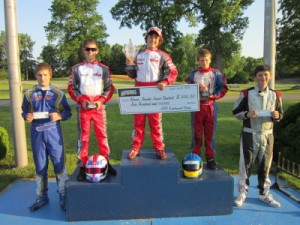 The Franklin Motorsports Leopard 125 I class staged next under dry conditions. Pre-final winner Adam Crepin and Michael Geringer paced the start. Crepin, Geringer and Colton Ramsey battled up front for the first few laps. Derek Dignan was working his way through the field after starting in the sixth row. While Crepin and Ramsey were battling for the lead, Dignan gradually caught the pair. Dignan (Alonso) moved to the point on lap 10 and pulled away to a .993 second win over Crepin and Ramsey. Nick Defronzo and Anthony Granata rounded out the top five.

The next class racing was the Jet Karting Yamaha Rookie I class with 18 entries. Pre-final winner and fast qualifier Gage Rodgers paced the start alongside of Mark Fineis. Fineis took the lead at the start followed by Rodgers and Blake Bauman. Maks Kowalski, Parker Abed and James Lynch joined the front pack next. Gage Rodgers (Birel) was able to make a move for the win on the final lap holding off Fineis by just .114 seconds at the finish. Bauman, Kowalski and Lynch rounded out the top five.

The Ballistic Designs Yamaha Masters class gridded next for their final with fast qualifier Chad Kruger and Brian Zirves pacing the start. Zirves moved to the point for several laps until Kruger took the lead back on lap five. Kruger (Merlin) was able to hold off Zirves for the win by .2 seconds. Dave Timmerman, Steven Everitt and Matthew Roberts rounded out the top five.

Next up was the Schwanbeck Family Racing Komet Sportsman I class with 13 entries. Fast qualifier and pre-final winner Sam Mayer paced the start alongside of Austin Schaff. After leading early in the race, a spin moved Mayer back in the field and Schaff took the lead next. Brandon Lemke (Merlin) took the lead next and pulled away to a 3.5 second win over Giovanni Bromante with Zach Holden, David Malukas and Austin Schaff rounding out the top five. 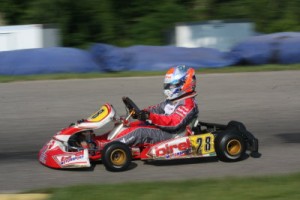 The last final racing on Saturday was the Hollywood Crane Service Kid Kart I Championship class with a big field of 21 entries. A brief shower put this class back onto rain tires. Pre-final winner Camrin Cass and fast qualifier Nicolas Martens paced the start with Cass grabbing the lead into turn one. Cass led about half of the race until Martens and Caiden Mitchell moved to the front. Martens pulled out the win over Mitchell by .391 seconds followed by Christian Franchuck, Maximillian Opalski and Camrin Cass in the top five.

After the completion of the finals on Saturday, a free barbeque dinner was served to all in attendance. A trophy presentation was done before the dinner where the top five in each class from Saturday’s races received their silver and crystal trophies on the infield awards podium. A big thank you goes out to the Andy and Kris Finke family and track workers for hosting the Route 66 Series at their great facility.

After the completion of the Saturday finals, a special 20 lap Yamaha Junior Shootout race was held sponsored by the QPS Employment Group. The drivers were competing for a $500 first place check and special crystal trophies for the top three. After a 10-minute qualifying session, Grant Quinlan and Mike McAndrews paced the start of the race. Quinlan quickly took the lead followed by Becker Reardon, both driving Birels. After falling back in the field, McAndrews raced his way back to second place. Quinlan (Birel) dominated the race pulling away to a 10 second lead at the finish. McAndrews, Reardon, Killian Keaveny and Brandon Collins finished in the top five positions which paid a purse of $1500. Brant Carter won a set of Bridgestone tires in a drawing for the Shootout entrants.

At the Sunday morning driver’s meeting, a set of Bridgestone YLC tires was given away to Ben Varner in a drawing sponsored by Margay/Bridgestone. After one round of practice, eight classes of racing took place with 8-lap pre-finals and 12-lap finals. 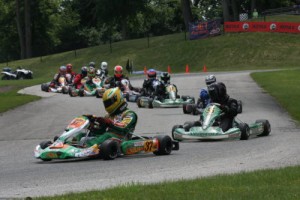 The first final racing on Sunday was the Haddock Limited Komet class. The start was paced by fast qualifier and pre-final winner Killian Keaveny and Ryan Weyer. Keaveny led early in the race until dropping out on lap five. This set up the battle for the win between Weyer and Christian Besasie. Weyer (Merlin) held off Besasie at the finish by .231 seconds to take the win.

Next up was the Express Karts & Parts Komet Sportsman II class with 13 entries. Brandon Lemke and Giovanni Bromante were locked in a tight battle the entire race with Lemke (Merlin) taking his third win of the weekend by .458 seconds at the finish. David Malukas, Zach Holden and Sam Mayer rounded out the top five.

The Hollywood Crane Service Kid Kart II Championship class was racing next paced by fast qualifier and pre-final winner Nicolas Martens and Christian Franchuck. Franchuck grabbed the lead on lap one with Martens moving back to the point on lap two. Martens gradually stretched his lead out to 12 seconds at the finish. Franchuck, Aidan Hinds, Alex Gransas and Caleb Bacon made the top-five podium.

The next final gridding was the Laukaitis Racing Yamaha Senior Heavy class with 19 entries. Much like yesterday’s Senior Lite race, it was Adam Crepin and Collin Griffin pacing the start of the final. Crepin took the lead at the start followed by Robby McQuinn and Collin Griffin. Griffin worked his way around McQuinn on lap two and set his sights on Crepin. Griffin (Tony Kart) moved to the lead on lap three and was able to hold off Crepin at the finish by just .122 seconds. The next pack of McQuinn, Nick Stagl, Jimmy Clark and Tim Brinkman finished about two seconds back.

The Yamaha Junior Lite class sponsored by Comet Kart Sales was up next. Fast qualifier and pre-final winner Grant Quinlan paced the start alongside of Kenlen Morse. Quilan took the lead into turn one with his Birel and showed he was the man to beat much like in the Yamaha Shootout. Morse and Christian Ledesma were battling for second while the pack of Becker Reardon, Killian Keaveny, Adam Sturgil, Dillon Morley and Emily Hurlbert were mixing it up for a top five finish. Quinlan (Birel) took the win by 3.8 seconds over Morse followed by Keaveny, Reardon and Sturgill in the top five.

The next class racing was the Switch Racing Engines Yamaha Sportsman II class with 23 entries. Pre-final winner Zach Holden and David Malukas paced the start. Holden and Giovanni Bromante, both driving Top Karts, battled for the lead early in the race while Brandon Lemke was working his way to the front after dropping back to fifth place at the start. By the last lap, Lemke (Merlin) was in second place and got by Holden to take the win by just .103 seconds capturing his fourth win of the weekend. Bromante, Malukas and Austin Schaff rounded out the top five with Lemke also setting quick lap of the race. 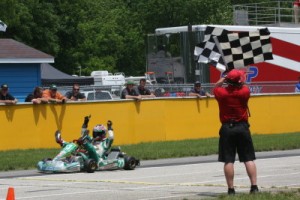 Next up was the Leopard 125 II class sponsored by Kart Lift paced by fast qualifier and pre-final winner Mick Gabriel and Derek Dignan. Gabriel and Dignan began to pull away from the field as the battle for third developed between Michael Geringer, Matt Stagl and Nick DeFronzo. Third place starter Michael Goodyear was off the track early dropping him to the back of the field. Adam Crepin was working his way up from his 12th place starting position and moved into the top five. Dignan stayed glued to Gabriel’s bumper for most of the race until Gabriel (Tony Kart) was able to pull out to a .61 second win at the finish. Dignan, Geringer, DeFronzo and Crepin rounded out the top five. Dignan set the fastest race lap at 42.422.

The last class racing on Sunday was the Yamaha Rookie II class sponsored by CKT Racing Engines with 18 entries. Pre-final winner Maks Kowalski and fast qualifier Gage Rodgers paced the start. Rodgers and Andrew Castelucci battled up front in their Birel karts for the entire race. Castelucci (Birel) moved to the lead about mid race and was able to hold off Rodgers by .088 seconds at the finish. Kowalski, James Lynch and Parker Abed rounded out the top five at the finish.

Merlin chassis captured the most wins over the weekend with seven followed by Birel (4), Tony Kart (2) and Top Kart and Alonso with one win each.

The next round of the Route 66 Series will be held at Badger Raceway on July 27-28. A special Yamaha Sportsman 20 lap money race sponsored by Bestway Drywall will be held on Saturday after the finals. $1500 in cash will be awarded along with a new set of Bridgestone YLC tires to the fast qualifier. Pre-entries must be post marked by July 8th to receive the pre-entry discount. Friday practice will be available at Badger Raceway. All entrants will have a chance to win a set of Bridgestone YLC tires in a drawing held at the Sunday morning driver’s meeting. For more information about Badger Raceway visit http://www.badgerkartclub.com For more information about the Route 66 Sprint Series, visit http://www.Route66KartRacing.com