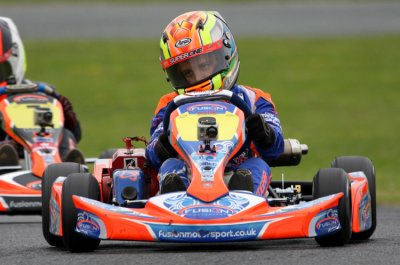 For the third round and approaching the half way point of Britain’s Max Challenge qualifier and ABkC National Championships for Rotax and Honda Cadet along with the MSA Comer Cadet National Championship the series moves to Wales. With much of the circuit very tight and twisty, but also having a long uphill straight, Glan y Gors is a challenging circuit for the competitors and set up engineers.

Dropping to third place after the first lap Rory Hudson forged ahead before the halfway point of the first Honda Cadet final to keep in front of Myles Apps and Morgan Porter. Apps had suffered from being on the outside at the start, falling behind but soon storming back with a great recovery. In the second final there was a great battle between the top half dozen karts, with Hudson, Morgan Porter, Kiern Jewiss and Matthew Hayden all having turns at the front. But in the end Hudson pipped Jewiss on the last lap with Hayden following through. Jewiss keeps his championship lead by 18 points over Hudson.

Oliver York and Jonny Edgar shared the winner’s spoils in the MSA Comer Cadet class. From pole position in the first final, York was in front all the way to the chequered flag whilst Edgar had only qualified seventh on the grid during a tricky Saturday punctuated by heavy showers of rain. In contrast Sunday was bright and reasonably sunny, as Edgar worked his way up to fifth behind Matthew Graham, never reaching the top trio of York, Tom Wood and Alex McDade. In the second final York succumbed to the attentions of Alex Quinn, who had only been eighth in the first one, with Edgar following through. And then Edgar nipped into the winning position on the very last lap, whilst York had to be content with third some 3s down the road, just holding off Wood and Graham. With his consistent results, Quinn maintains his championship lead at the halfway stage, but will soon come under threat when the dropped score is taken into account.

Connor Hall’s winning run came to an end in the Mini Max first final as he lost out in the last couple of laps, but only temporarily. Polesitter Tom Gamble plunged down the order at the start, with Samuel Pooley going ahead, chased by Sandy Mitchell who took over the lead after a few laps. When Pooley retrieved the lead, Mitchell fell to the back of the group and Hall inherited second, only to lost out in the frantic dicing over the last few laps as Mitchell made a great recovery for second ahead of Hugo Bentley Elis, Josh Skelton and Adam Smalley. Cadet British Champion Dean MacDonald was one of several coming off at the start. In the second final Hall soon picked off his rivals and relieved Pooley off the lead in a less frantic race. Pooley fell back to fourth behind Smalley and Dan Zelos but was excluded for a flag infringement. That elevated Mitchell and Ellis.

Ben Hingeley controlled the first Junior Max final with a lights to flag victory over Josh Price, Guan Yu Zhou Jai Nijjar and Jack Bartholomew in a remarkably static race. Jake Walker was holding sixth for many laps but fell to the back, Max Aitken capitalising for this position. Although the new Welsh Champion Tom Harvey fell back from his eighth place start in the second final, he had clearly found some more speed as he stormed through to third place. Josh Price had grabbed the lead at the start with Hingeley soon back into second and tracking him closely in amongst a major five kart scrap. Hingeley assumed the front position with six laps to spare, and just as it looked like he would cruise to victory Harvey, having displaced Price, pounced at the top of the circuit to pull off a staggering win. Zhou was black flagged after a few laps for taking off Max Aitken so Hingeley has extended his points advantage over his Chinese rival, with Price not far behind.

As Oliver Hodgson enjoyed an uninterrupted run to victory in the first Rotax Max final over Kyle Fowlie and Sean Babington, previous winner Charlie Eastwood crashed out at the start. Hodgson was shuffled back to third in the second final as Fowlie went ahead chased by Babington in a major battle. Josh Collings surprised Hodgson with a late pass to demote the first final winner to fourth. Eastwood did well to storm back through the order to seventh place and now ties with Babington in the points table with Hodgson only two points in arrears.