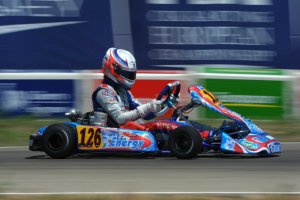 Parker Thompson left Alcaniz, Spain with a fourth place result in the opening round in the CIK FIA European Championship
(Photo: KSP.fr)

In his quest for continued improvement and to proudly carry the Canadian flag in Europe, KFJ and Energy Corse pilot Parker Thompson would travel to Spain for the opening round in the CIK FIA European Championship. Taking place at the MotorLand Aragon International Circuit in Alcaniz, the technical track would reward talented drivers and Thompson was one of them as he added yet another top five result to his 2013 CV.

“The facility and layout of the track is exceptional,” explained Thompson. “There is a restaurant and bar that overlooks the track, the paddock is spacious and the on track action is second to none. However, the runoff and kitty litter that lines the track was very hard to deal with at times.”

Starting the week off with unofficial testing, Thompson and his Energy Corse squad showed tremendous speed and looked as if they would be right on pace throughout the official event days. With fellow competitors and KFJ rivals improving their pace throughout the week, the young Canadian would slowly slip down the running order, which became evident in qualifying. Unable to get the draft needed to turn a fast lap, Thompson would find himself in the 30th position in the field of 84.

Thompson continued, “It was gut check time after qualifying and everyone worked really hard to get us back to the front of the field. Everyone doing their separate jobs, yet collectively working together, we worked as a team and the engine, carburetion, chassis and my driving came to life.”

Starting from the outside row in tenth for his important heat races, Thompson would have some of his best drives since being in Europe to claw his way back into contention. Knowing that a crash in one of the heats would make for a disaster of a weekend, the GFR powered driver played it smart and was cautiously aggressive. Developing a package for the all-important Sunday, Thompson progressed through the heats to finish 7th, 8th, 11th, 10th and 5th, gaining enough points to transfer directly to Sunday in the 12th position, lining up in his prefinal from outside row three.

What was a tough start to the event was rapidly turning into a solid weekend for points and an excellent recovery for Thompson and his Energy Corse squad. Moving forward at the drop of the green flag in his prefinal, Thompson would exit the first complex of corners in the fourth position and eventually advance one more spot before the checkered flag would fly.

Lining up sixth for the main event and within striking distance, Thompson would endure a difficult opening corner as he would have to take to the gravel to miss an incident and would fall down the running order to 14th. On a mission to march his way back forward, the young and talented Canadian made an entertaining charge through the field to make it back into the top five and claim a fourth place result.

“I owed it to my team,” expressed Thompson. “The entire crew worked collectively to give me the chance to challenge for a podium result and after the first corner of the main event, I was devastated. I drove my heart out as they deserved a solid result.”

Parker Thompson left the opening round making his mark on the series. Currently sitting in fourth in the overall series title chase, Thompson’s next attack on the European Championship will be the week of July 17-21 in Ortona, Italy.

For more information on Parker Thompson including partnership opportunities, please visit him online at http://www.ParkerThompsonRacing.com or Parker Thompson Racing on Facebook and Twitter @parkertracing