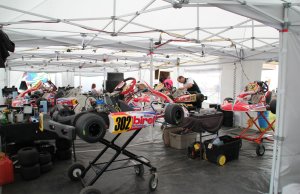 The spring season for Racing Edge Motorsports can only be summarized with one word; productive. The past events on and off the track have been extremely successful as the team continues to develop its driver programs and marketing platforms. The teams Rotax and Briggs programs have yielded impressive results at various club events as well as the Eastern Canadian Karting Championships this past May.

The team’s first true test of its new structure and paddock layout for the 2013 season was put on display for all to see during the first and second rounds at Mosport during the opening weekend of the Eastern Canadian Karting Championships. This was also the first opportunity REM hosted a VIP guest list, which included a variety of individuals from both the corporate world and auto racing industry.

The team’s on track performance was undoubtedly dominant during the season opener at Mosport. Kevin Monteith, Taylor Gates, Kieran Oxley, Rui Teixeria, Brayden Seberras, and Stefan Yasin represented the teams Rotax program while Harland Goulbourne and Jason Assinck competed in the Senior Briggs 4cycle program. Each session was extremely competitive as the majority of the drivers raced within the top ten positions. Taylor Gates was on route to a top five position when unfortunately encountered another driver fighting for the same section of race tarmac. Taylor was not able to complete the final race due to a heavily damaged right front. Kieran Oxley also maintained a strong pace throughout the weekend while battling with the front runners.

The biggest take away however was the pole position and back to back victories by Kevin Monteith in the Senior Rotax Max class on Saturday and Sunday. Throughout the weekend at Mosport, the team was plagued with various weather conditions, making it challenging to decide between a wet or completely dry setup. A few very last minute decisions proved to be the correct call as Kevin managed to successfully stay ahead of the field, leading the majority of the race on a damp but relatively dry track.

Racing Edge Motorsports is looking forward to the next round as it leads the Senior Rotax Championship. The team is also supporting the comeback of Rui Teixeria who nursed a severe ankle injury during the weekend at Mosport. Regardless of the difficulty he had to endure, Teixeria managed to still maintain a quick pace and secure 17th position in the final respectively.

The summer season is upon us, as Racing Edge Motorsports now prepares for rounds three and four of the Eastern Canadian Karting Championships at Goodwood Kartways June 29th and 30th. The team is also in preparation to welcome new members and drivers under the paddock for upcoming events which continues to add to an already established platform.

To learn more about Racing Edge Motorsports please visit http://www.racingedgemotorsports.com where you can also link to the teams Facebook and Twitter page.