Under some of the hottest temperatures that the state of Florida has seen this year, Florida Karting Championship Series (FKCS) competitors would do battle at the Monticello Karting and Motor Club in Northern Florida. With round four on the docket and championship battles beginning to take shape, new race winners would come to the forefront at the 17-turn ultra fast facility.

“The Monticello event is the most northern event on our schedule and the attendance numbers were still awesome,” explained FKCS President Eddie Gennaro. “The remaining two rounds will be at the OGP facility where Jorge always puts on an awesome show and the championship round will be at the famed 103rd Street Motorsports Complex in Jacksonville. Series officials are looking forward to these events and hope that teams and competitors are as well.”

Gennaro continued, “I would personally like to thank the series teams, competitors and staff that battled and overcame the heat from this past weekend. With heat indexes well over 105F, participant never missed a beat and provided some great racing action.” 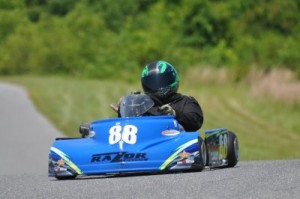 Devine Design – Kid Karts
Five of the youngest FKCS competitors would take part in the Kid Kart demonstration class in Monticello, with all being honored as up-and-coming drivers in the sport. The class included a ten-lap race featuring Francisco Porrata, Owen Lloyd, James Egozi, Lucas Rodriguez and Jeremy Fletcher.

Performance Plus – Senior Clone
Joey Miller was once again the driver to beat in the Senior Clone division as he went on to claim the ten-lap main event victory by 0.516 seconds. Glenn Fichter would be the best of the rest coming home on the second step of the podium while Jason Froemming and Pinigis Evan would cross the line in the third and fourth place positions respectively.

Homestead Karting – Rotax Mini Max
Saturday’s Rotax Mini Max final would see a frequent FKCS race winner revisit the top step of the podium. Scoring another victory in his 2013 campaign, Mathias Ramirez would best the field of twelve drivers to take the checkers. The Keel brothers of Aidan and Ian would finish second and third while Devin Boutot and Vincenzo Sarracino would have strong runs and finish just inside the top five.

Parazhino Chassis Works – Rotax Micro Max
In one of the most exciting races of the weekend, Tyler Gonzalez would take the Rotax Micro Max victory ahead of a hungry Humberto Porrata and Jordan Heffner. The star of the race would be Heffner though as a first corner incident would see her run outside the top five and a ways back from the leaders. Turning race laps nearly half a second faster than her competitors, Heffner ran down the lead duo in the closing laps and attempted to make a bid for the top spot entering the first corner. Hesitating slightly and being forced to the bottom of the track, Heffner would go into a slight spin that would see her lose twenty kart lengths and essentially took her out of contention for the win. Derek Carmenate would come home fourth just ahead of Juan Jose Diaz.

Connery Concrete – Rotax Senior
Florida Winter Tour frontrunners and multi-time race winners Oliver Askew and Nick Neri would battle it out for the Rotax Senior victory with Askew coming out on top. Neri would score the morning’s pole position and finish the main event in P2 followed closely by Dustin Stross. Porter Aiken and Jonathon Kotyk would round out the top-five making it five Ocala Gran Prix drivers in the top five positions. 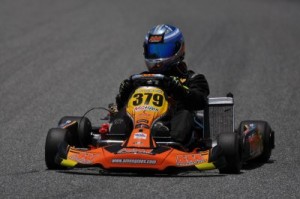 RaceComplex – TaG Junior
Colin Warren would again be the victor in the TaG Junior final, besting 19 other competitors in the mixed engine class after sweeping the action in round three. Brian Lockwood, who took fast lap honors, and Sebastian Sierra would complete the podium, with Quentin De Boever and class frontrunner Olivier Bellanger completing the top-five positions.

Rok Cup USA – Rok Masters
A familiar face would stand atop the Rok Masters podium, as Ariel Castro once again dominated the category. Castro topped the charts in the mixed class race, and also was the fastest kart on the track. Rounding out the results in Rok Masters where Thomas Hankinson, Peter Pestano and Francois Brun-Wibaux.

Heffner Performance – TaG Masters
In TaG Masters, Scott Roberts would add another victory to his 2013 FKCS tally, with a dominant win over Kevin Coy and Bobby Greene. Ricky Brooks and Rafael De Paoli completed the top-five.

Orlando Kart Center – Rok Junior
Class frontrunners Austin Garrison and Ryan Norberg duked it out for the Rok Junior win, with Garrison reaching the checkered flag a scant 0.144 seconds ahead of Norberg. Sasha Brun-Wibaux crossed in third, while Devin Bowerman and the always-fast Colin Warren completed the top-five. 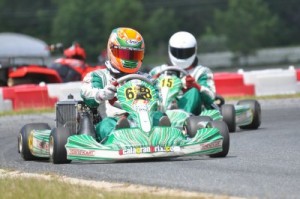 Holster Store – Rotax Masters
Scott Roberts would add another victory on the weekend in the Rotax Masters category, scoring the race win over Kevin Coy, Bobby Greene and the Holster Store’s own Jerry Brown.

RaceTechDevelopment.com – Rotax Junior
A stacked field of Rotax Junior drivers would take to the Monticello circuit with Brian Lockwood scoring the day’s win. Austin Garrison and Olivier Bellanger battled for the final two podium positions, as Sebastian Sierra and Ryan Norberg came out of three-kart fight for the top-five.

Cadet Junior Sportsman
After taking the Mini Rok win on Saturday, Aiden Keel added another win with a dominating performance in the Cadet Sportsman ranks on Sunday. Vincenzo Sarracino edged out Hunter Padilla for the second place podium spot, while Dylan Gennaro again found himself in the top-five with his fourth place effort. Juan Jose Diaz finish fifth overall.

Rok Cup USA – Rok Masters
No surprise in the Rok Masters class, as Ariel Castro once again emerged victorious, this time with Francois Brun-Wibaux hot on his heels. Brun-Wibaux was the fastest driver on track, but came up just 0.457 seconds shy. Thomas Hankinson would complete the podium.

Harvest Motorsports and Ocala Gran Prix – Shifters (ALL)
Female pilot Ashley Rogero would have a break through gearbox event as she took the victory in the Stock Moto division. Flexing her muscles and taking advantage of tough circumstances for other drivers, Rogero finished just ahead of AJ Myers and Kurt Mathewson. Dan Brubaker would take the top spot in the Masters Shifter category while Farshad Bagheri garnered the top step of the podium in the ICC division. 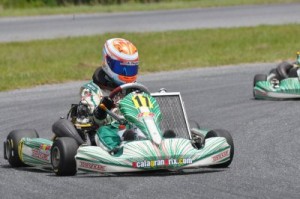 RYSA Racing – TaG Senior
OGP’s Dustin Stross posted a commanding win in the TaG Senior class, blasting his competition with a nine second margin to second place and clocking fastest lap of the race. Porter Aiken and Zeb Davis completed the podium with Corey Towles and Mike Andrews Jr. rounding out the top-five.

Orlando Kart Center – Mini Rok
Class frontrunner Mathias Ramirez was back on top in the Mini Rok class, earning the day’s victory by four seconds in his bid for the overall title. Battling for the final podium finishes were Mayo Livingston, Vincenzo Sarracino and Tyler Gonzalez. Aiden Keel added a top-five finish to his Monticello results.

The next event of the 2013 Florida Karting Championship Series will take place at the Ocala Grand Prix facility in Ocala, Florida over the July 5-7 weekend. Please check the FKCS website in the coming weeks for registration, pit spot and hotel information.