eKartingNews.com Driver of the Month – May 2013 – Brandon Lemke 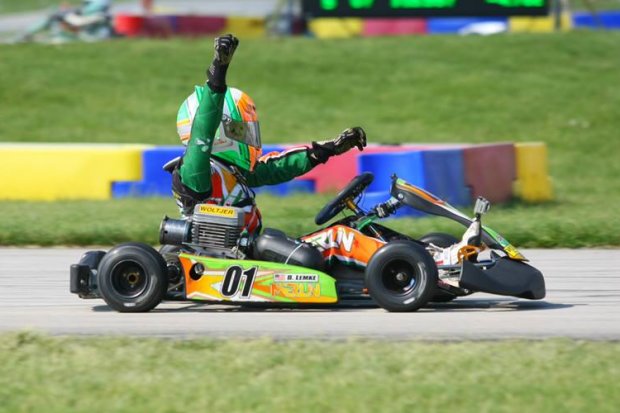 The depth of talent found at the Cadet level of the sport is astonishing. From the club level, all the way up to the national programs in the United States, there are a number of young drivers that have the drive, passion and skills to be competing at the top level of the sport as we witness every year with a new crop of rookie Senior competitors. Many of the best compete in the WKA Manufacturers Cup Series, as we have seen over the past few seasons. 2013 is no different with a number of the top young guns in the sport racing for championships. The latest event at the New Castle Motorsports Park – the McLaughlin Motorsports Nationals – saw Wisconsin driver Brandon Lemke pilot his Merlin karts to four victories in six main events. His efforts have earned him the title of eKartingNews.com Driver of the Month for May 2013.

Lemke, a favorite for the NCMP circuit in Indiana, took on all three Sportsman categories both days. Of the 18 sessions, Brandon ended either in first or second place except for one. Seven of the 12 races on the weekend ended in photo finishes – three of which were main events – with Lemke’s record 3 for 7 in his favor.

Saturday was a strong day with Lemke qualifying first in all three classes – Komet Sportsman, Cadet Sportsman, and Yamaha Sportsman. Brandon won two of the three Prefinals, coming up just short (0.031 seconds) in the Komet race for the win. He bounced back in the feature to edge out David Malukas by 72 thousandths. After leading all day in the Cadet class, Lemke had to settle for second. In Yamaha, Brandon swept the entire day, crossing the line just ahead of Malukas again by 0.041 seconds.

The following day was another day of top results. Lemke came one class away from sweeping all six qualifying sessions on the weekend, topping the charts in Komet and Cadet while placing fourth in Yamaha. Brandon missed out on the Prefinal win in the Komet class by 0.086 seconds to Anthony Gangi Jr., but came back to score the victory in the Final. One of the closest finishes of the weekend was the Cadet Prefinal result, as Lemke edged out Gangi by eight thousandths. Zach Holden however got the better of him and Malukas in the feature, with Lemke in the middle in second place. Brandon saw another race slip from his grasp in the Yamaha Prefinal, losing to Holden by five hundredths after starting fourth. He came back in the Final to secure his fourth victory of the weekend.

Lemke is currently 1-2-3 in the championship standings for the series. He leads by 55 points in Yamaha Sportsman – running as the defending champion, second in the Komet Sportsman standings and third in Cadet Sportsman at the halfway point of the season. Brandon made his Junior debut this month at the United States Pro Kart Series, earning a best finish of fourth at the New Castle event. Lemke is set to continue chasing after his 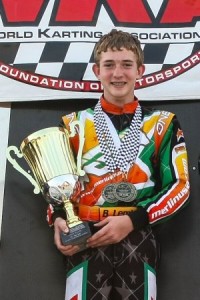 May 2013 EKN Driver of the Month – Brandon Lemke

Chassis: Merlin Cadet
Engine/Engine Builder: Woltjer (Comer, Yamaha, Komet)
Sponsors: Quickswim Inc., MaD Racing
Series You Compete In: WKA Manufacturers Cup Series, Route 66 Sprint Series, United States Pro Kart Series
Years Karting: 5
How did you get started in karting? My dad wanted to race as a kid, so he told me I should do it. Glad I listened to my dad
What has been the high point in your racing career? Winning RoboPong 200 Yamaha Sportsman event (and the $5k), which allowed me to race in the SKUSA SuperNats in Las Vegas last year
What are your goals in racing? There’s always room for improvement. I want to keep learning everything I can about racing and improve my driving. I hope to attract sponsors so that I can continue to do what I love doing. Ultimately, I would like to make racing my career.
In a few words, how would you describe your driving style? Focused, ambitious, adaptable
Funniest moment at the race track? At the WKA Man Cup event at New Castle, Zach Holden pointed out some dogs walking on the freeway during our pace lap.

What do you do when not at the track? Hunting, fishing, hanging out with my friends
What are your goals outside of karting? Continue to do well in school so that I can be successful in my future career.
What type of street car do you drive? Not old enough yet…
What type of street car would you like to drive? Ferrari
What are your pet peeves or things that irritate you? Hitting my funny bone, getting hiccups, people that don’t understand karting
What do you think could be done to improve the sport of karting? More publicity
What are your favorite aspects about the sport of karting? The speed, close level of competition and meeting people from all over the country.

May 2013 Driver of the Month – Honorable Mention: