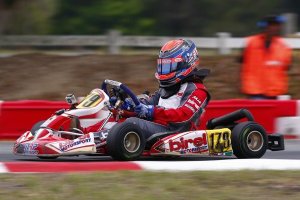 David Malukas has raced several different 2-cycle sprint karting applications this June and he’s accomplished a good deal of success behind the wheel of the HMD Trucking MRP Birel karts.

Malukas opened the month by making an unexpected trip to Katy, Texas, for the Texas Pro Kart Challenge at Gulf Coast Kartway. David had never seen the track before Saturday morning, June 1, but he proved to be a quick study. Malukas qualified fifth for Rotax Mini Max and worked his way to the second position in the heat race.

David shined in the main event. After practice, qualifying and the heat, Malukas got comfortable in the Rotax-powered Birel, taking the lead from MRP Birel teammate Nicholas Brueckner and fending off Brueckner to score the win by a close 0.207-second margin.

The win marked Malukas’ second Rotax feature win of the season; he scored his first at Ocala Gran Prix in March in the final round of the Florida Winter Tour.

The second weekend of June saw the HMD team head back to New Castle Motorsports Park in Indiana for the fourth time in six weeks. After running the Route 66 Sprint Series, Great Lakes Sprint Series and WKA Manufacturers Cup in May, the fourth and final big New Castle race this spring was the second round of the new United States Pro Kart Series (USPKS).

David once again competed in the full-size Birel chassis in the Yamaha Junior division, marking just his second event in a full-size chassis.

Saturday’s USPKS action at New Castle saw David win the Yamaha Junior heat one and take third in heat two before an incident on lap nine of the main event retired David from the race. David was running a strong second place at the time of the accident.

Malukas was back at it Sunday, June 9 at New Castle. David showed great speed in his Birel and won both heat races to start on the pole for the Yamaha Junior main event. Entering the main event, Malukas was the favorite to earn his first Junior win but Emerson Reed had other ideas. Malukas and Reed raced hard throughout the 15-lapper, trading the lead several times before Reed made a pass on Malukas on the final lap to earn the victory.

While David had to settle for second, he turned a lot of heads in the process. Malukas performed very well throughout the weekend while racing against drivers mostly at least a year older than him.

“I like racing the full-size chassis,” David said after the USPKS event at New Castle. “I thought it handled very well and we had good speed all weekend. I wanted to get that win on Sunday but we fell a little short. New Castle was tough between USPKS and WKA. We were close a lot of times but kept falling a little short. I’m looking forward to heading to South Bend.”

David kicked off three straight weekends at JET Karting at Michiana in South Bend, Ind., this past weekend with the Route 66 Sprint Series, where he recorded three top-five finishes in four starts in the Yamaha and Komet Sportsman divisions.

The HMD team will return to South Bend this weekend for the second round of the Great Lakes Sprint Series. Then the WKA Manufacturers Cup Series will take center stage at South Bend for the 2013 Grand Nationals June 28-30.

Malukas rides No. 79 MRP Motorsport Birels and is proud to be sponsored by HMD Trucking. For more information, visit DavidMalukas.com