The second event for the new Can-Am Karting Challenge took place at the historic Pat’s Acres Racing Complex in Canby, Oregon. The 7/10-mile course provided a unique challenge for the Rotax Max Challenge and Superkarts! USA competitors taking part in the third and fourth rounds of the series. A number of winners stepped up once again on the weekend, setting up for a solid run in the second half of the championship chase.

Former United States Rotax Max Challenge champion Joey Wimsett doubled up on his home turf in the HoleShot Drive Systems Rotax Senior Wimsett set the bar in qualifying, edging out race winner Jake Craig by a scant 94 thousandths to earn the pole position with fellow local drivers Phillip Arscott, Andrew Zimmer and point leader Stepanova Nekeel rounding out the fast five. The front of the field remained unchanged with Wimsett continuing to show the way through the Prefinal with the win and the same contenders in the hunt. Wimsett went wire-to-wire in the 20-lap Final for the victory, driving away to a two-second advantage. Arscott, who posted the fast lap of the race, was able to work past Craig early and held it to the checkered flag to earn the second step of the podium in his first series start. Nekeel ran to fourth with Zimmer holding fifth. 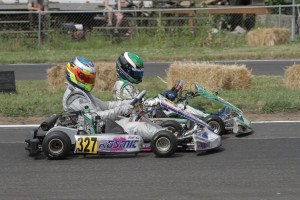 The drama picked up the following day after Wimsett once again posted the fast lap, but was removed from the results after an error regarding registration with tech. This moved Nekeel to the pole position with Arscott, Craig and Geoffrey Roberti all within a tenth of a second to his time. Eyes were on Wimsett as he drove from last to the eighth spot in just 14 laps, as Nekeel remained out front, edging out Craig and Roberti for the win. The 2012 DD2 United States champion was quickly into the top five and was trailing the top two of Nekeel and Craig. Rather than working together early, they swapped the lead a number of times which kept Wimsett within striking distance. Wimsett made his move on lap 14, working past Craig and then Nekeel on the following circuit. From there, he held on to the checkered flag for his second victory of the weekend. Craig ended up second with Nekeel scoring another trip to the podium to add to his point lead. Arscott drove to fourth after starting the Prefinal at the tail end of the field, joining Wimsett, with Zimmer placing fifth. The win total was four for Wimsett, as he ran unchallenged in the Maximum Velocity Performance DD2 category.

The wins were split in the Rolison Performance Group DD2 Masters class on the weekend, as Scott Falcone ended Derek Wang’s streak from Chilliwack before the point leader scored his third win of the weekend on Sunday. Wang set the pace in qualifying, but was out-gunned in the Prefinal by Falcone who came from third to first to score the win by over two seconds. The strong pace set by Falcone continued in the Final, dominating the race over Brent Harper and Wang for his first series victory. Sunday saw DW return to the top in the qualifying session, nipping Falcone for the pole position. Wang led the entire Prefinal race and backed it up with another flag-to-flag run in the Final for his third victory of the season. Harper scored second with Falcone back in third. 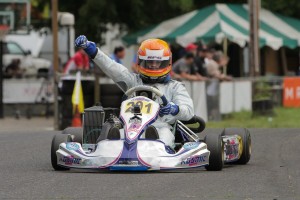 Luke Selliken made it four for four on the series, as he swept the Finals in the CRG West Rotax Junior category. It was all Selliken on Saturday, as he was at the top of the results sheet in qualifying, Prefinal and Final. The 20-lap main event was all Luke, as he drove to a six-second victory over Florida driver Antoni Ptak with Jake Preston rounding out the podium. Marco Eakins and Canadian Jordan Redlin completed the top-five. Sunday was Luke at the front once again, out qualifying the field by over two tenths to start the day. A five-second win in the Prefinal was followed up an eight-second margin of victory in the Final. Ptak scored another runner-up finish with Blaine Rocha placing third, edging out Preston with McKay Snow a solid fifth.

Two drivers have established themselves as the ones to beat in the Wicked Fabrication Mini Max class. Trenton Sparks scored his first series victory during Saturday’s action while point leader Sting Ray Robb added a third this season on Sunday. Sparks swept the day’s action from qualifying to the final checkered flag against the 10-kart field, driving to a three-second advantage over Robb with Mathew Morgan completing the podium. The following day was Robb nearly earning the pole position over Sparks. The fight continued on into the Prefinal until Sparks retired two laps short of the checkered flag. This gave Robb a clean run to the win and led all 15 laps of the main event for the victory. Sparks drove a great race, driving up to second with Morgan once again in third. 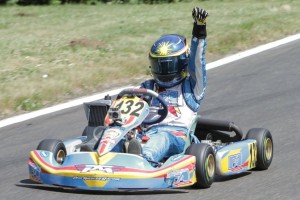 It was another nail-biting weekend in the Neilton Racing Concepts Micro Max category as number of race winners grew to three drivers, and has seven within 100 points of each other in the standings at the halfway point. Max Wright won the race to the checkered flag on Saturday, edging out top-qualifier Jonathon Portz and Prefinal winner Austin Portalski. Portz came back the next day as the quickest driver in qualifying again, earning the top spot over Arizona driver Diego LaRoque. Portz held the lead position through both the Prefinal and Final, earning his second victory of the season. Wright came home second with Portalski in third.

Dayna Ward doubled up in the Rotax Masters division, ending Mike Daniel’s run at the opening rounds in Chilliwack. Ward was the top driver in qualifying but retired after four laps in the Prefinal. This gave Falcone the win as he ran double duty on the weekend. Falcone and Daniel battled early in the main event, with Ward catching up quickly. Into the lead by lap five, Ward drove to his first victory of the season. Falcone looked to have second in hand but retired on the final lap, giving Daniel the position and moving Corey Mitchell to the third step of the podium. Ward continued at the front on Sunday, leading the way in qualifying and the Prefinal. The start of the Final saw the front row collected in a wreck, shuffling everyone around with Mitchell grabbing a sizable lead. Ward was the quickest driver on the track, and was able to run down Falcone. Ward focused on chasing Mitchell until lap 19 when he caught and passed for the lead. The following lap, Mitchell spun on the exit of the banked corner, and fell down the order. Ward went on to cross the line first for his second victory of the weekend. Falcone would be classified second with Daniel in third. 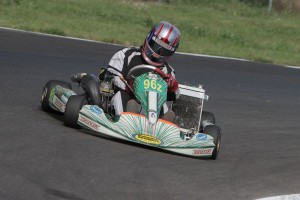 Dalton Egger was one of three brothers to win in the SKUSA shifterkart categories on the weekend
(Photo: Ken Johnson – Studio52.us)

In Superkarts! USA action, the Egger brothers all earned victories on the weekend. Cameron Egger ran uncontested in the S1 Pro Stock Moto division. Dalton Egger scored his second victory of the season in S2 Semi-Pro Stock Moto on Saturday, edging out Kory Estell. Sunday, Egger retired early in the main event, handing the first place trophy to Estell with Skyler Benoit in second. S5 Junior Stock Moto was contested by Brady Egger, running unchallenged both days. The S4 Masters Stock Moto category welcomed eight drivers on the weekend. Ben Johnston was the victor during Saturday’s action, as David Whitelaw and Bruce McKean rounded out the podium. Sunday saw Johnston leading until his carburetor detached from his Honda engine, putting him on the sidelines. This put Chuck Eaton into the lead and on top of the podium with his first series victory, as Steve Perdue and Brandon Brock ran second and third.

The 2013 Can-Am Karting Challenge returns to action in just three weeks, as the series travels just an hour east to McMinnville, Oregon, the home of the Portland Karting Association on July 5-7. More information about the event and the entire series can be found athttp://www.rotaxcanamprokartchallenge.com