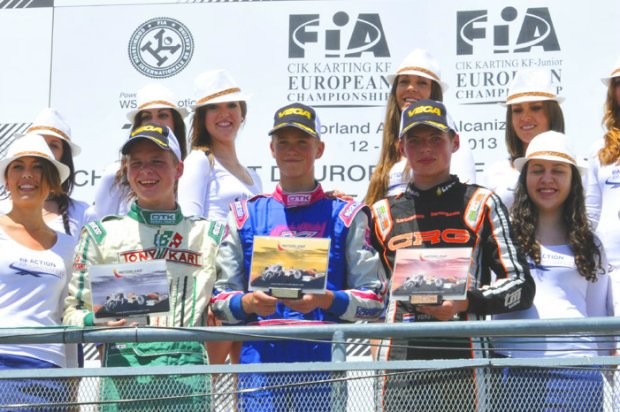 A surprising result characterized this race of international karting. It happened in Alcaniz (E), at the Motorland Aragon facility, in the first out of two rounds of the CIK-FIA European Championship (KF and KFJ categories) of the 2013 season. In particular, the KF Junior category had remarkable results achieved by new names of kart racing, even though they had to deal with very experienced drivers. So, the 2013 European championship began with the victories of the Danish Nicklas Nielsen in KF and of the English Lando Norris in KF Junior. In both cases, to achieve success the two drivers had to give their best.

NIELSEN, FIRST LEADER IN KF
The first part of the race, in KF, was dominated by the English Ben Barnicoat (ART GP-TM-Vega). However, after winning four heats, he finished the Pre-final in the back positions because of a contact with the Italian Felice Tiene (CRG-Parilla-Vega). It seemed nothing could prevent Nicklas Nielsen (Kosmic-Vortex-Vega) from winning the race, buth the Danish driver was overtaken by his fellow countryman Christian Sorensen (Tony Kart-Vortex-Vega) in Prefinal 2. Moreover, in the other Prefinal, the winner was the Dutch Max Verstappen (CRG-TM-Vega), followed by another top driver such as the French Dorian Boccolacci (Energy-TM-Vega). Despite the great level of his competitors, Nielsen managed to beat them all rather easily after the first two laps of the Final: he managed to gain an early lead starting from the second row ahead of Sorensen. Verstappen pursued the two leaders while Tiene began his recovery from the 15th row of the starting grid. Nielsen kept at bay Sorensen, who managed to close the gap with the leader in the last laps. Verstappen, too, followed closely and nearly passed Sorensen with few metres remaining, when Nielsen had already won the race. Excellent result for Tiene, who completed his recovery with an outstanding 5th place, just behind the Polish Karol Basz (Tony Kart-Vortex-Vega).

Canadian Lance Stroll (Zanardi-Parilla-Vega) and Logan Sargeant (Tony Kart-Vortex-Vega) were the lone two North Americans in the KF field of 64. Stroll was strong off the trailer, qualifying seventh overall. A worst finish of fourth in the four heat races put him third overall in the results. Starting second in the Prefinal 1, he fought hard to retain the position in the 12-lap battle, eventually finishing third. Starting on the outside of row three, Stroll was shuffled back at the start and was spun around in the opening corners. Completing just two laps, he would retire early and be classified 30th. Sargeant was 26th after the qualifying sessions and recorded two seventh place finishes in the heats. Unfortunately, two DNF results dropped him down the order to 44th overall after the heat round-robin. Starting 22nd in Prefinal 2, Sargeant was unable to move up the order and ran toward the back of the field, retiring a lap before the checkered flag and finishing 27th and not qualified for the Final.

NORRIS, GREAT BATTLE TO WIN IN KFJ
The final result says that the English Lando Norris (FA Kart-Vortex-Le Cont) won the KFJ category. The Londoner crowned with the victory an outstanding weekend: he was the top driver on Friday and Saturday, while on Sunday he had to recover in the final phase. The winner of the Final was the Thai driver Sasakorn Chaimongkol (Kosmic-TM-Le Cont) – holder of a British licence -, but stewards gave him a 10-second penalty for a contact with Norris himself during the last lap. The Asian driver dropped back to 14th. That’s a real shame for his performance: he had won Prefinal 1 and had grabbed the pole in the Final. Another protagonist of the race was the Belgian Matteo Raspatelli (Tony Kart-Parilla-LeCont) who, after his victory in Pre-final 2, challenged Norris until the chequered flag of the Final, finishing behind the Englishman for only 44 thousandths of a second. This second place is the first, important international result achieved by the Belgian driver. The third step of the podium was occupied by the Dutch Martijn van Leeuwen (Zanardi-TM-LeCont), who had made himself conspicuous since the first heats.

Canadian Parker Thompson (Energy-TM-LeCont) continues to shine in his rookie season in Europe, placing fourth in the opening round of the series. After qualifying 30th overall, he managed to move up to 12th in the overall order after the heat races. Starting sixth in Prefinal 2, Thompson was able to move into third in the late stages of the race to start outside row three of the Final. After dropping back to 12th on the opening circuit, Thompson fought his way back up to fifth by the checkered flag and was awarded another spot with the Chaimongkol penalty. The results put Thompson into the hunt for the championship. Logan Sargeant (Tony Kart-Vortex-LeCont) flew the American flag, ending up 20th at the end of Sunday. Sargeant was the top North American in qualifying, placing ninth overall but dropped after the heat races to 34th. He gained spots back in Prefinal 2, placing 11th. A great jump at the wave of the green flag saw Logan up to ninth after the first circuit, but was shuffled out the next course outside the top-25. He would manage to gain spots and finish 20th. Devlin DeFrancesco (Zanardi-BMB-LeCont) was unable to qualifying on past the Prefinal with American Zackary Dante (Praga-Parilla-LeCont) making his first start in Europe, classified 70th after the heat races and unable to qualify for one of the two Prefinals.

ALL THE IMAGES OF THE EUROPEAN CHAMPIONSHIP IN ARAGON
The weekend of CIK-FIA on the Spanish track, after today’s images in live streaming, are available on the Internet. On http://www.cikfiachampionship.com the Finals are already viewable. Appointments also on TV with the pre-recorded broadcast of the races. Broadcasting times are still being defined by Rai Sport. On the other hand, the TV Special report on Rai Sport 2 has been put on schedule on Friday 21st June at 24.00