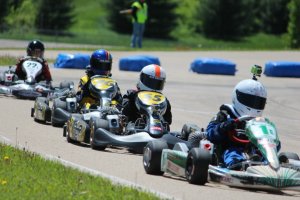 SYDWAZ Racing just got back from a great weekend in Shawano, Wisconsin. Team drivers Max and Nicholas Nufer did a great job all weekend! Nicholas came home with two 1st place trophies and Max with a 2nd and 3rd trophy.

The SKUSA Midwest Prokart Challenge held race 3 and 4 at the US Air International Raceway. This has to be one of the best karting tracks in the United States. It is a one mile roller coaster of a ride! The track is set among lush green rolling hills. There are elevation changes, off cambered corners, a carousel, downhill sweepers, etc. Everything a kart racer could possibly want in a track.

Friday, May 31, 2013 was full day of practice. Max and Nicholas Nufer took to the track for their first stint. Nicholas stated that it was most fun track he had ever been on. Max easily agreed and said it the best karting track ever. The boys got a lot of seat time and quickly mastered the track. Kurt Nufer was busy making adjustments and fine tuning the karts. The track closed down around 5 and we called it a day.

Saturday, June 1 was race #3. Unfortunately, the racer count was pretty low. It was a shame since Stan and his SKUSA workers put on a great show. The missing racers lost an opportunity to drive on one of the coolest karting tracks. Nicholas had three other competitors for a total of 4 TAG Cadets. Max had two other S5 shifters. They decided to run all the shifters together so there were a total of 7 karts in his race. The day started off nice and sunny but clouds started to gather. There were two rounds of practice before qualifying.

In the Tag Cadet class, Nicholas Nufer put in the fastest lap and took pole position. Heat 1 was an exciting race. Nicholas was quickly passed by Sam Paley at the start and a great battle ensued. Nicholas eventually regained first place for the win.

In the S5 Shifter class, Heat 1 was all Erik Nelson. He led from pole with Kyle Kennedy taking 2nd and Max Nufer in 3rd.

Despite some thunder in the area, the radar looked clear for a little while, and the Cadet drivers began Heat 2. As soon as the green flag waved a few drops began. By the 2nd lap, the clouds opened up and the rain poured down. The racers navigated the soaking track on slicks for 2 laps until the race was red flagged and the kids safely made their way back into the pits

Everyone gathered under the tents to wait out the rain. Radar showed it would just be passing through. Unfortunately as soon as the rain would begin to slow down, it would start up again. Eventually it looked like it was about to finish. Stan called it a rain race and everyone began to get ready. At that point, the monsoon began and the parking lot was flooding. Race 3 was then cancelled and teams packed up for the day.

Sunday, June 2 was Race #4. The weather was a bit cool in the low 40s, but there was no rain in the area. The sun was out and the temperature was expected to rise. We lost a couple shifter racers for the day. Unfortunately their homes were affected by the storms in St. Louis and they headed back home. All the other racers were anxious to get started. Once again there were two practice sessions before qualifying.

Heat 2 was similarly close with wheel to wheel racing and no margin for error. The final results for heat 2 were 1st – Nicholas Nufer, 2nd – Max Kaiser, 3rd – Nic Sheppard and 4 – Sam Paley. The Main event could only be similar to the earlier competition!

The boys had watched each other all weekend. They knew their competitors strengths and weakness and hoped to capitalize on them. The race was definitely a Team event with Max, Nic and Sam working together for the win. With Nicholas on his own he got passed, and spent the early part of the main in 2nd or 3rd place. He closely managed his tires and waited for the last few laps to make his moves. With the laps dwindling down, Nicholas found his way back to the front and began to pull away. Nicholas built up a several second gap and took the win and fastest lap. The results for the Main Event were 1st – Nicholas Nufer, 2nd- Sam Paley; 3rd – Max Kaiser, and 4th – Nic Sheppard.

In the Shifter class, Erik Nelson took pole with a 1:01:881, followed by Nick Lougee 1:02:127, Jenna Grillo, 1:02:973, and Max Nufer 1:03:290. Erik Nelson finished first in Heat 1, followed by Nick Lougee, Max Nufer and Jenna Grillo and “her orange cone”. The Heat race 2 had some good battles as well. Max and Jenna traded places back and forth. The results for Heat 2 were Erik Nelson, Nick Lougee, Max Nufer and Jenna Grillo. The Main Event was fun to watch. All those previous laps had taken a toll on the tires. The racers were having a hard time to find grip and were often sideways coming through the corners. There was a great battle between Nick and Erik, with Erik eventually getting the win. The final results for the Main were Erik Nelson in 1st, 2nd – Max Nufer, 3rd – Nick Lougee and 4th – Jenna Grillo.

Despite the weather and the low turnout, SYDWAZ Racing had a great time. The US Air Raceway is a great facility. The track is in superb shape and fun to drive. Max and Nicholas would love to come back here and race. We strongly recommend that all karters should give this track a try. It is worth the drive!

SYDWAZ Racing would like to thank our sponsors for all their help. A special thanks to Jason at Swedetech and Andre at Tony Kart (OTK) in Orlando, Florida.

Our next race is the SKUSA Pro Tour Summer Nationals in Grand Junction, Colorado.