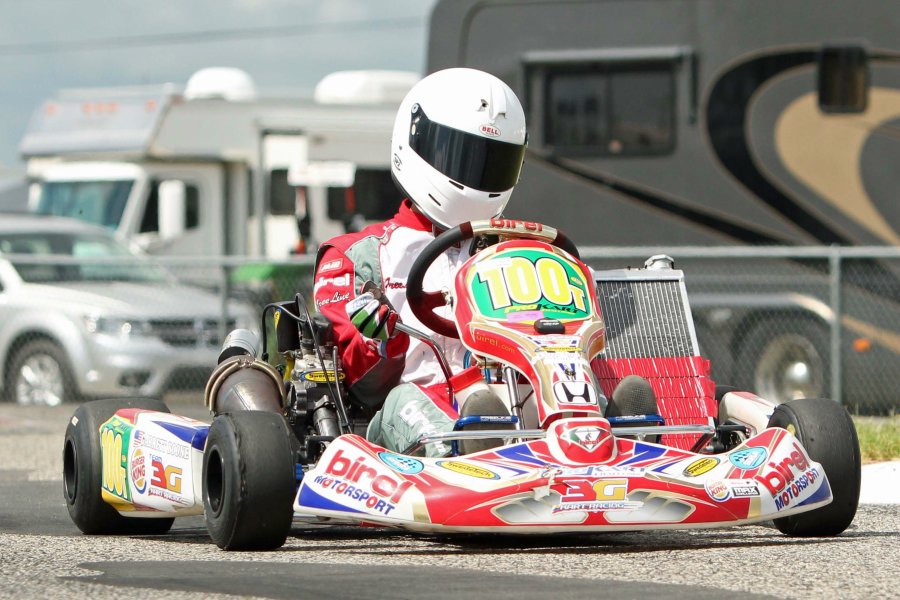 The Texas ProKart Challenge regional series – presented by 3G Kart Racing/Burger King®/Fernelius Alvarez Attorneys/Dallas Karting Complex held round three and four this past weekend (May 31-June 2) at the Gulf Coast Kartway in Katy, Texas. The 7/10-mile course – located just outside the metropolitan Houston area – welcomed racers within the United States Rotax Max Challenge and Superkarts! USA to take on the tight and challenging course as they fight for a piece of the roughly $25,000 in prizes set to be awarded at the end of the season. Competitors were welcomed to a dry track all day Saturday for round three, but began Sunday on a wet track before it eventually dried out for the remainder of the day.

The racing action in the Pole Position/DR Kart S2 Semi-Pro Stock Moto and SwedeTech S4 Master Stock Moto divisions were action packed, with a number of top contenders from the SKUSA Pro Tour program on site. Jerry Rhodes laid down a stellar lap to earn the S2 pole position to begin round three. Miguel Lopez entered the fray in heat one, moving up to the top spot, only to see Ryan Kinnear taking over the lead in heat two. Garrett Boone became the top challenger in the main event, but Kinnear was able to power away in the 16-lap battle to earn a three-second victory. Boone settled for second with Lopez rounding out the podium. Kinnear began Sunday where he left off the previous round, at the top with the fast lap in the wet qualifying session. He and Boone ran in the top two in the heat race, with Boone sliding through for the win. Boone was able to keep Kinnear behind him in the main event, leading all 16 laps for the victory with Rhodes ending up third. 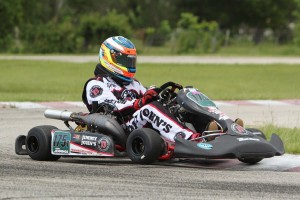 Chris Jennings was able to earn two victories in the S4 division, ending the streak of Jordon Musser. Qualifying saw Musser taking the bonus points, but Jennings struck back in heat one with the win. Musser came away in the top spot in heat two, only to be run over at the start of the main event by an S2 competitor. This gave Jennings a clear run to victory number one over Mark Reid and Jean Michel Gaston. Jennings went wire-to-wire on Sunday as he led the class throughout the day. Musser ran second on the day until the main event when he took over the lead. Jennings stalked him the entire time and set up a last lap pass to secure the victory. Musser had to settle for second with Reid in third.

In total, ten drivers were able to secure a double victory weekend. Veteran Mike Jones took on the young guns in the DD2 category with success. Jones outran championship contenders Alex Tartaglia and Nathan Mauel both days, while Lance Lehrman ran uncontested in the Dallas Karting Complex DD2 Masters class. The J&T Racing S5 Junior Stock Moto division saw Raul Guzman as the early leader until Jesse Woodyard came through with the second heat win and scored the main event victory. Guzman ran second with point leader Nathan Adds behind him in third. Woodyard swept the action on Sunday while Adds and Guzman swapped positions on the podium. Woodyard was among the challengers in the Champion Racing/Intrepid Rotax Junior category, earning the two heat wins Saturday. Top qualifier Trenton Estep however scored the victory, edging out Austin Osborne with Woodyard in third. On Sunday, Estep was the top qualifier once again, as Woodyard followed suit in claiming the win in the heat race. The two were the top drivers in the main event, with Estep earning a near four-second advantage at the checkered flag with Osborne placing third behind Woodyard. Osborne would be victorious in the Champion Racing/Intrepid TaG Junior class, pacing Rodrigo Rejon both days.

Illinois driver David Malukas made a guest appearance in the Enertech/Chase Racing Mini Max division, leaving for home with both first place trophies. Round two winner Nicholas Brueckner was the top qualifier, earning the win in heat one. Malukas was able to squeak past the Texan in heat two, leading all 12 laps of the feature. Brueckner ran a close second with Max Hewitt in third. On Sunday, Hewitt navigated the rain better than the rest of the 11 driver field to score the pole position, while Brueckner raced his way to the win in the heat race. The main event however proved to be Malukas’ once again, as he edged out Brueckner for his second victory of the weekend while Hewitt duplicated Saturday’s podium finish. TaG Master saw Jesus Robles earn a double win weekend. Championship leader Patrick Roth was second on Saturday with Paul Jones third, with the drivers switching positions on Sunday. Rotax Masters had championship leader David Pergande extend his point lead with two wins on the weekend over Steven Clark. 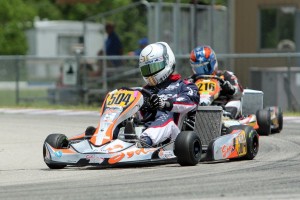 TaG Cadet welcomed another solid group of drivers in the category reaching a total of 14, including one driver from New York – round one winner Dylan Tavella. Championship leader Nicholas Brueckner began the weekend as the driver to beat, but was run down by Tavella in the opening heat race. Tavella came to grips with the Katy circuit quickly and lead the way the remainder of the day for the victory. Luis Alfonso Perez Pena ran second with Brueckner third. On Sunday, Emiliano Richards swept the day for his first victory on the season. Pena ran second once again with Max Hewitt a close third in the main event. Richards did earn another victory on the weekend, with his second coming in the Micro Max class. Richards was able to cross the line first over top qualifier Maxwell Waithman with heat two winner Ethan Arndt in third. Sunday, Richards began the day at the top of the time charts, and carried it over into the heat race. Sunday’s main event however belonged to Waithman, taking over the lead with three laps to go from Richards. Marcello Garcia was third, earning his first podium of the season.

Seven drivers contested the TaG Senior category on the weekend. Point leader Wyatt Maness was the victor on Saturday, as he drove to a two-second advantage over Scott Boone with Michael Bartholomew in third. Sunday’s action saw Brian LaBarbera earn the first place hardware, as Boone and Bartholomew ran second and third ahead of Maness. Alex Tartaglia was able to secure his first victory of the season in the Rotax Senior class on Saturday. Tartaglia bested Connor Clay and Ronnie Price. Sunday saw Logan Bearden join the fight for one day, earning his second win of the season as Tartaglia ran second and Price once again in third. 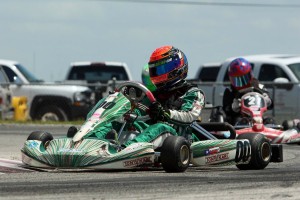 Multiple prizes were handed out during the awards ceremonies on the weekend. Honda Performance Development/HPD provided top end kits to the fastest qualifiers in the S2 and S5 categories. Jorge Galvin won a free entry for the upcoming round at NTK for traveling the farthest distance – over 1,700 miles – from Cancun, Mexico, edging out New York driver Tavella by just 100 miles. Raul Guzman and CJ Cramm also won free race entries to the next Texas PKC event. Max Hewitt, Emiliano Richards and Nathan Mauel each won a set of tires, MG Tires for Hewitt and Richards while Mojo rubber for Mauel.

It will be just a short three weeks before the Texas ProKart Challenge returns back to action. The North Texas Kartway – home of the North Texas Karters organization – will be the site of rounds five and six on a special Thursday, June 27 to Saturday, June 29. Racing will take place Friday and Saturday night with practice held on Thursday. Events will be held under the lights, providing one of the only regional programs to compete in the evening on the season. Visithttp://www.texasprokartchallenge.com and find them at Facebook.com/texaspkc to keep track on the updates as the 2013 season rages on.