Foré returns to top in KZ, Canadian Thompson stands on podium once again in KFJ 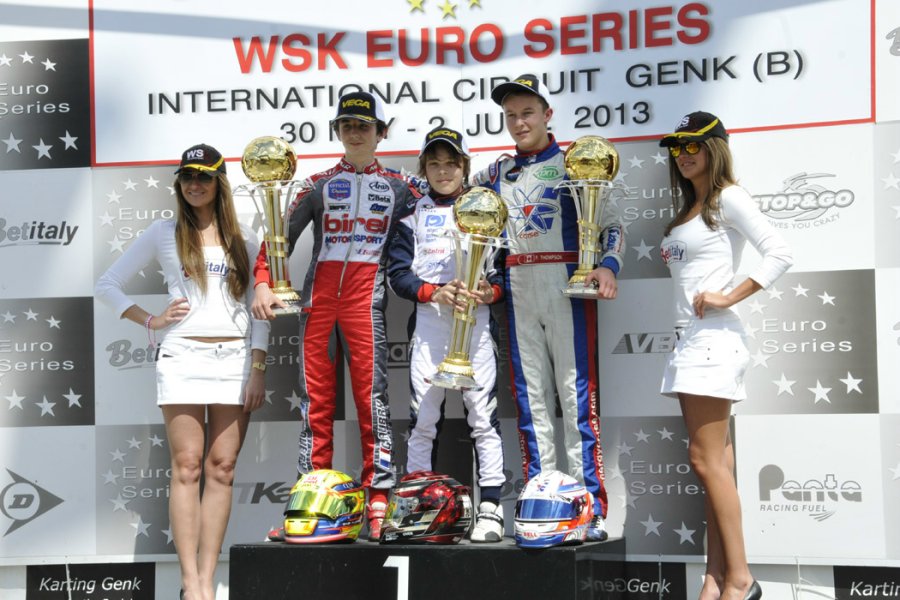 The 2013 WSK Euro Series finished in Genk (B). The winners of the round were Foré (I – CRG-TM KZ1), Johansson (S – Energy-TM KZ2), Nielsen (DK – Kosmic-Vortex KF), and Beckmann (D – Zanardi-BMB KFJ). On Friday, June 7 at Midnight the recap of the race with WSK TV Magazine on RAISPORT 2.

THRILLING FINALE OF THE WSK EURO SERIES IN GENK
It looked like drivers were driving in the most important race of their career: they all did their best to succeed in the fourth and last round of the 2013 WSK Euro Series run in Genk (B). There were drivers battling for the championship or just for the podium: whichever the goal, the 170 drivers did not spare themselves. The WSK weekend in Flanders was spectacular and thrilling, either seen from the stand of the Horensbergdam Circuit or on the wsk.it website, which broadcast the live streaming of the event.

FORÈ COMES BACK TO VICTORY LANE. VERSTAPPEN WINS THE SERIES IN KZ1
Max Verstappen (CRG-TM-Bridgestone), young and promising Dutch driver, arrived in Genk aiming at the KZ1 success. The target was hit thanks to his victory in Final 1. Davide Forè (CRG-TM-Bridgestone), the Italian champion with a long experience in kart racing, wanted to add this victory to his long list of honours. He, too, hit the target winning Final 2. Between these two events a lot happened: Verstappen had to stop in one of the morning heats, then he recovered until the podium in Final 2 despite a damaged bumper and, finally, he got disqualified for the very same damaged bumper. Anyway, the disqualification had no consequences on the final standings. On the other hand, the poleman, the Belgian Rick Dreezen (Tony Kart-Vortex-Bridgestone) had to stop after the start, while his teammate, the Italian Marco Ardigò, had to leave his second position to the Belgian Jonathan Thonon (CRG-TM-Bridgestone). Third, after Verstappen’s disqualification, the Czech Patrik Hajek (Praga-Parilla-Bridgestone).

JOHANSSON IS THE WINNER IN KZ2. NEGRO WINS THE SERIES
Two wins in today’s heats and the participation in Final 2 did not seem enough for Riccardo Negro (DR-TM-Bridgestone) to win the Series in KZ2. In the decisive race the Italian driver needed to finish ahead of another Italian, Marco Zanchetta (Maranello-TM-Bridgestone): the Series would go to the driver who achieved the best result. Negro gained the lead at the start, but then he had to surrender to the pressure of the Swedish Joel Johansson (Energy-TM-Bridgestone). Johansson was the half race leader, while Negro got overtaken also by his teammate, the Norwegian Emil Antonsen. Then, to keep the third position, he had to fend off the attacks of Zanchetta, who eventually did not manage to pass his rival. So, Johansson finished first, followed by Antonsen and Negro, who stepped onto the podium as winner of the Series in KZ2.

NIELSEN WINS THE KF FINAL, BOCCOLACCI THE SERIES
After dominating the heats in KF, the Danish Nicklas Nielsen (Kosmic-Vortex-Vega) surrendered to the French Dorian Boccolacci (Energy-TM-Vega), but then won the Final. Nielsen got an early lead and finished first ahead of the British Ben Barnicoat (ART GP-TM-Vega) and the Russian Vasily Romanov (Energy-TM-Vega). Boccolacci placed fourth, a result which allowed him to win the Series.

Canadian Lance Stroll (Zanardi-Parilla) experienced his worst weekend of the series, unable to qualify for the Final. After qualifying 25th, the Chiesa Corse pilot was a DNF in two of his four heat races. Despite a third in the final heat race, it was one position short of transferring into the Prefinal race. Stroll finished the season classified 13th in the point standings.

BECKMANN IS THE KFJ FINAL WINNER, BUT NORRIS KEEPS THE LEADERSHIP OF THE SERIES.
German, at his first international success, David Beckmann (Zanardi-BMB-Vega) succeeded in winning a tough Series such the WSK Euro Series. After winning several heats, Beckmann finished his weekend winning the Final too; only the French Gabriel Aubry (Birel-TM-Vega) – the runner-up ahead of the Canadian Parker Thompson (Energy-TM-Vega) – kept up with him, but only during the first laps. Given his remarkable lead, the Final had no influence on the category leadership of the British Lando Norris (FA Kart-Vortex-Vega), winner of the Series.

Thompson was fourth after the qualifying and SuperPole sessions. A slip down to 12th his opening heat race after contact dropped him toward the back, he bounced back with two heat wins. A fourth in his other heat race placed him third on the grid for the Prefinal A. After jostling around for position, and ended up fourth to start the Final from row four. Driving a smart race, Thompson finished in the third position and ended the series eighth. Kami Moreira-Laliberte (Zanardi-Parilla) was another Canadian competing on the weekend, unable to qualify for the Final.

THE FINALE OF GENK ON RAI SPORT 2. After the live streaming aired by the official website http://www.wsk.it, on Friday 7th June, at midnight, the WSK TV Magazine on Rai Sport 2 with the recap of the race in Genk.