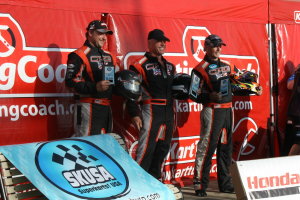 While the temperatures rise as summer rapidly approaches, the racing action also picks up. Across the country, the Superkarts! USA regional ProKart Challenges keep racers busy in between Pro Tour events. Over the last two weekends, the Rocky Mountain ProKart Challenge, Texas ProKart Challenge, and the California ProKart Challenge were all on the track. CRG-USA and its family of drivers competed in all three regions, supporting their drivers, and winning races.

The back-to-back weekends of racing got kicked off Memorial Day weekend in Colorado as team owner Stacey Cook and the Grand Junction-based CRG-USA crossed the Rocky Mountains and set up camp at IMI Motorsports Complex in Dacono, Colorado for the third round of the Rocky Mountain ProKart Challenge.

CRG-USA was represented in the TaG Cadet division by the young Tristin MacLeod. It was an up and down day for MacLeod in the biggest TaG Cadet field of the season. Despite a good qualifying effort that saw MacLeod start mid pack, Tristin’s first of two heat races would come to an early end after his kart had fuel pickup failure. The second heat race saw Tristin gain one spot early only to fall back to his original starting spot with one lap to go. The main showcased MacLeod’s determination and will to succeed after he moved all the way up into the top three in the main event. MacLeod staged a great race for second. MacLeod would come inches away from capturing the position, as he earned a solid third step on the podium. MacLeod left IMI sitting in the third place in points.

CRG-USA ruled the day in the S4 Masters Stock Moto Colorado. Jet Davis led his teammates as CRG karts occupied the top five nearly the whole day. Davis won the pole, and went on to sweep the day all the way through the heat races and into a dominating win in the main event. Davis’s win in the main event would be taken away however after he was penalized for jumping the start, dropping Davis from first to second, handing the win to CRG-USA teammate David Conyers. Pride of Wyoming Scott Allen rounded out the podium in the third place, handing CRG-USA the sweep of the S4 class. Rob Van Deren and Daryl Mackie filled out the top five both aboard CRG-USA entries.

In S2 Semi-Pro Stock Honda, longtime Colorado racer Jack Bradley and shifter kart rookie Lindsay Brewer ran out of the CRG-USA tent. After qualifying third, Bradley stayed in the top three all day, even moving into second at the start of the main. After fighting the good fight to stay in the podium, Bradley would finish the main event in fourth place. Teammate Brewer had a more challenging day. Brewer qualified sixth on the grid and fell to last after only completing one lap in the first heat race. The second heat race showed just how quick Brewer has adapted to the new style of shifter kart racing. In the short 10-lap heat race, Brewer gained six spots to earn her a third place finish in S2 while also running the fastest lap of the heat race. In the main event, Brewer raced mid pack for most of the 20-lap main event. With five laps to go Brewer moved back into fourth place and with two laps to go she took third place away from Bradley. The pass would earn Brewer a podium finish after only a handful of starts in the S2 category.

Sabré Cook did what she normally does in Colorado, win. Cook had a long day to catch up to S1 Pro Stock Moto top qualifier after suffering a mechanical issue on her out lap in the timed session. Cook would have to start the heat dead last in the combined S1-S2 group. After moving up to the second after two rounds of heat races, Cook wasted no time in the main event. Taking the lead on the back stretch of the opening lap, Cook checked out on the field on her way to nearly a five second win.

In Texas, CRG-USA supported RPM Motorsports was competing in the third and fourth rounds of the Texas ProKart Challenge at Gulf Coast Kartway in Katy, Texas. Jerry Rhodes and Zach Herrin ran in S2 category for RPM. Rhodes kicked things off on Saturday by winning the pole position in qualifying but battled with issues in the heat races. After not making the grid for the second heat race, Rhodes finished sixth in the main on Saturday, and came back on Sunday to earn a podium by finishing third. Herrin came out of Katy with some battle wounds as he was roughed up some during the weekend. He went on to earn finishes of seventh and ninth. Brandin Warwas ran well in Mini Max on Saturday. After qualifying on the front row, Warwas came home fifth in the main event. On Sunday, despite failing to complete a lap in qualifying, Warwas drove back to finish fifth in the main event. S4 driver Michael Rhodes Jr. finished sixth in the main event in round three and improved to fifth place on Sunday against a very competitive field. Steve McCaffery had a weekend to forget in Katy, as he did not finish the main event on Saturday, and did not even start the race on Sunday in round four.

Another podium finish was earned at the California ProKart Challenge by CRG-USA driver Jimmy McNeil. The 2012 PKC S1 champion drove to a third place finish at the Willow Springs International Raceway in Rosamond, California. Robert Marks came up just short of a podium run in the S2 Semi-Pro Stock Moto category, with Darrell Tunnell earning the same position in the S4 category.

CRG-USA is preparing for the next Rocky Mountain ProKart Challenge event, held at the home track of Grand Junction Motor Speedway. The July 5-7 weekend will host rounds four and five of the series, and serve as a warm-up event for the Superkarts! USA Pro Tour SummerNationals to be held two weeks later. CRG-USA is an official K1 RaceGear, MG Tires, and DDR Engines race team, and ready to provide the best trackside service in 2013 at the Superkarts! USA Pro Tour, Rocky Mountain ProKart Challenge and other selected events and series. The company is also continuing to add to its growing dealer network with new locations throughout the United States. If you are interested in becoming part of the CRG-USA network, or becoming part of this growing professional race team, please contact Stacey Cook at info@CRG-USA.com or phone 855-TEAMCRG.

About CRG-USA:
Located at the Grand Junction Motors Speedway in Colorado, CRG-USA is the newest importer for the CRG chassis brand. Operated by Stacey Cook, the company will focus their distribution and marketing on the western and central portion of the United States. In addition, the operation is fielding a national race team program through the 2013 season at all the major karting events on the year. If you want to race with the best product in karting, jump on board with CRG-USA today. Visithttp://www.crg-usa.com or phone 855-TEAMCRG (832-6274).