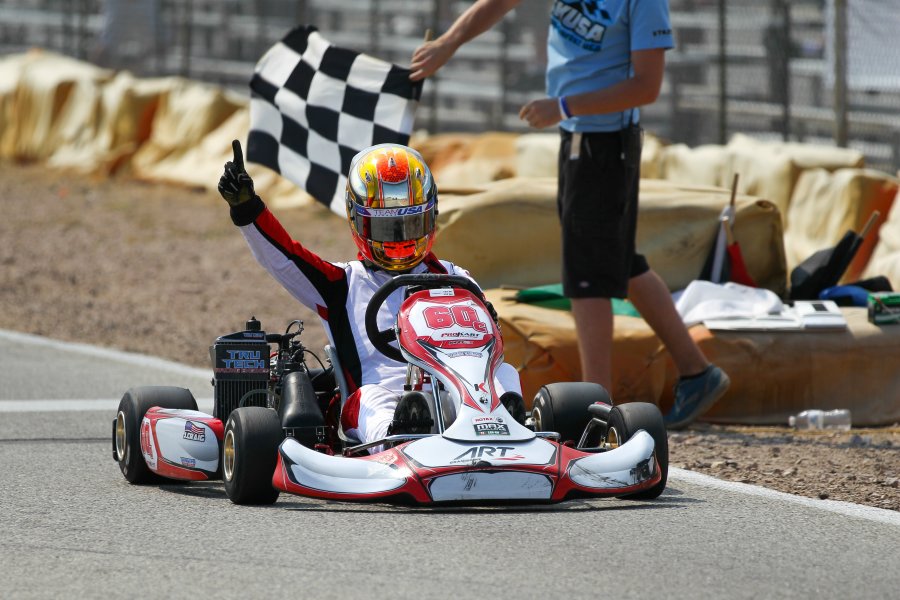 Familiar names were once again taking home the hardware from the fourth round of the California ProKart Challenge. The Superkarts! USA regional event took place at the challenging Willow Springs International Raceway karting circuit on May 31-June 1. It was the second visit to the Rosamond, California facility, with this event contested on the 6/10-mile in the reverse direction (clockwise). Competitors took on the challenge as the series began the second half of the season, shaping up the championships even more – and eliminating the pretenders from the contenders. Those able to earn the top step of the podium Saturday evening, where over $1,500 worth of prizes were handed out by SKUSA, were some of the same names seen there thus far on the season.

Jake Craig has shown to be the best in class for much of the 2013 series, but this weekend was a dominant performance in the Pure Karting TaG Senior division. The former SKUSA Pro Tour Junior champ swept the Willow event to extend his championship lead while claiming his third straight feature win of the season. Craig set the tone in qualifying with the fast lap of the session (44.047). Carlee Taylor was impressive, ending up in the second position with Chris Cricca – making his first start of 2013 – in third. Jake led wire-to-wire in the heat races, with Taylor and Cricca trailing. The main event was another perfect run by Craig, leading all 20 laps for the victory. Cricca jumped to second early and held it to the end, trailing by six seconds. The fight was for third with former series champ Matt Johnson coming through on the final lap to steal the position from Taylor and Alejo Fernandez. 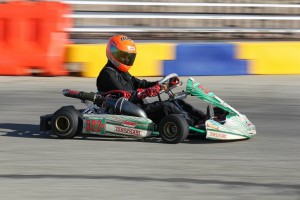 The top three Stock Moto categories all saw one driver sweep each category. Billy Musgrave extended his winning streak to four in the Extreme Karting/Vemme S1 Pro Stock Moto class. Florida driver Don Whittington came through for his first victory in the Buddy Rice Karting S2 Semi-Pro Stock Moto division, while Curtis Cooksey stole the Leading Edge Motorsports S4 Master Stock Moto win. Musgrave paced the entire group running together on-track all day, from qualifying thru the heat races and into the main event. The gap was just 77 thousandths in the S1 timed session, with Musgrave edging out championship rivals Alec Gumpfer and Jimmy McNeil. After that, Musgrave put on a show leading all the laps in the heat races and the feature race. Gumpfer would settle for the second spot over McNeil, with Matias Podboj and Ryon Beachner rounding out the top five.

Whittington was on his game, as the second-year driver adapted to the reverse direction of the Willow Springs course the quickest. He swept the days action, including leading all 20 laps in class over championship leader Connor Wagner. It was the second straight podium for Whittington, firmly placing him in the championship chase. Vivek Tandon rounded out the podium, with Robert Marks and Curtis Paul Jr. trailing. Willy Musgrave appeared to have the S4 category wrapped up, and was on his way to a possible second victory of the season when the air box from his Honda powerplant became detached. This brought out the ‘meatball’ flag and put Musgrave onto the pit lane, out of the race. Musgrave pulling off gave Pro Tour driver Curtis Cooksey the lead, with Ken Schilling trailing. The SoCal driver fought hard to get around the Vegas veteran, but Cooksey prevailed to win on his first trip to the series this season. Schilling settled for second in his best finish on the year, while Alex King placed third in his first visit back to PKC since 2010. 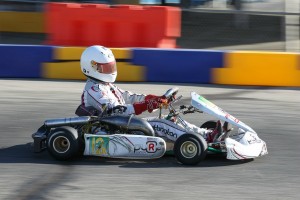 The front of the 23-driver Phil Giebler Racing TaG Junior field was a revolving door throughout the day, with Justin Lepe able to secure his first victory of the season. Defending series champ Carter Williams began with the pole position, nipping out Lepe by just 49 thousandths of a second, with Zack Dante within a tenth as well. Lepe held off a charging Noah Grey in heat one, as Williams dropped back to third. Grey continued moving forward, earning the win in heat two over Williams and Lepe. The trio put on an amazing show in the 20-lap feature race, with all three taking a turn at the point. With three laps to go, Lepe took over the lead and never looked back to score the victory. Williams held on to finish second with Grey ending up third. Nick Ramirez and Zack Dante completed the top five. No one has been able to stop the Billy Cleavelin train that has dominated the Mike Manning Karting TaG Master category this season. Despite another solid turnout of drivers, the SoCal racer secured his fourth victory of the season by sweeping the action at Willow Springs. Cleavelin drove to a 10-second advantage in the feature, with Paul Grey and John Molinare completing the podium.

One way to secure your position in the championship chase is with a victory, and Ryan Schartau did just that in the Sunshine Daydream Creations TaG Cadet class. Dante Yu began the day as the driver to beat, posting a lap four tenths clear of the field in qualifying, and went on to win both heat races in the process. The field caught up by the main event, however. Yu was shuffled back to fifth on the opening circuit, putting Tomas Mejia at the front. He and Schartau swapped the position lap after lap. With two circuits to go, Schartau took over the lead and secured his second victory of the season. Yu fought his way back to second, with Mejia earning his first podium finish of the season in third. The TaG Rookie category saw Jude Logsdon earn the win, with Jace Jones and Alex Arbuckle completing the podium. 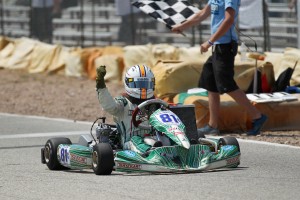 The series will break for the next few months to allow the teams and competitors to recharge for the final two rounds of the 2013 season. The California ProKart Challenge returns to action on September 6-7 at the Santa Maria Kart Track in Santa Maria, California and is followed by the series finale at the Streets of Lancaster Grand Prix on September 28-29 in Lancaster, California. Many will be in attendance at the SKUSA Pro Tour SummerNationals, set to be held at the Grand Junction Motor Speedway on July 19-21. Superkarts! USA would like the thank the following companies, in addition to the support of the class sponsors, for their aid toward the 2013 season: MG Tires, Mothers Polish, Honda/HPD, VP Racing Fuels, Motul, MIR, and AiM. Stayed tuned to http://www.superkartsusa.com for information on the SKUSA California ProKart Challenge, as well as updates on Twitter at @SuperKartsUSA and at Facebook.com/SKUSA.