Manson and Cox star at Sunbelts 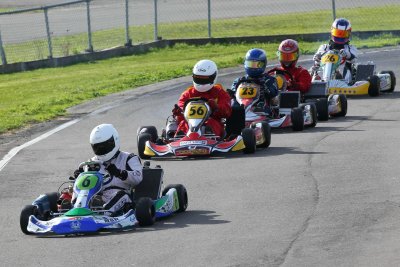 Canterbury drivers Scott Manson and Chris Cox starred at the 28th annual Sunbelts Sprint Kart Championship meeting which ran in Nelson and Blenheim over the weekend.

The popular annual meeting attracted over 70 entries from Invercargill in the south to Tauranga in the north with KartSport Nelson hosting the first day of competition at Classic Hits Kart Raceway near Richmond, KartSport Marlborough the second at 100% Herkt Appliances Kart Raceway in Blenheim.

Conditions could hardly have been better with blue skies and cool, crisp conditions on both days.

On his way to his first major meeting victory in the premier 6-speed gearbox-equipped 125cc KZ2 class, Manson, 16, from Christchurch, won five of the nine heat races over the two days.

Cox, 20, from Rangiora and already a two-time South Island in the class, was always in contention, however, with the battle going down to the last heat race and only one point in it at the end.

Also impressing with his pace was Nelson driver Matt Butchart, who split race winner Manson and third placed Cox in the second heat and ended up third overall.

Manson also shadowed Cox in the 125cc Rotax Max class after the first day of competition only to withdraw from the class on the second day, leaving Cox to canter home for class victory from fellow Cantabrians Matthew Straker and Tim Smith.

Another reigning South Island class champion Jacob Mitchell from Christchurch was the dominant force in the Cadet class, winning all nine races. However his kart did not pass post-event technical inspection, handing event victory to Dunedin youngster Josh Bethune and the best finishing Blenheim competitor, William Exton, doing a great job at his first big meeting, to finish second.