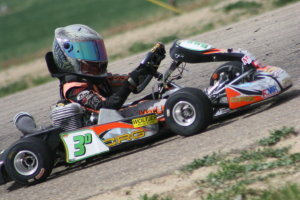 Tristin MacLeod is improving in only his second year racing with the Superkarts! USA Rocky Mountain ProKart Challenge. The Grand Junction, Colorado driver kicked off his sophomore effort racing in the 2013 RMPKC series. Aboard his CRG-USA Mini Rok powered TaG Cadet entry, MacLeod is grabbing the attention of all those in attendance at the races.

“He has steadily improved. Last year he was running at the back, and now he is in the hunt every weekend we race,” regional and national SKUSA race director Terry Bybee said after Tristin’s third place effort at round three of the RMPKC at IMI Motorsports Complex in Dacono, Colorado.

After making his national debut, by racing in the 2013 SKUSA SpringNationals in Tucson, Arizona, Tristin and his father Jim returned to Colorado in preparation for their regional season to kick off. The first stop for Tristin, round one and two of the RMPKC at Miller Motorsports Park in Tooele, Utah.

MacLeod rolled in to the sprawling Miller Motorsports Park complex never before seeing it, or the race track before. The learning curve for young Tristin was steepened when practice on Friday was delayed by the building of his kart. After not getting out on Friday, and having only walked the track with his CRG-USA teammates, Tristin hit the track with only optimism and a ‘move forward’ attitude. On Saturday for round one, Tristin qualified fourth. In the first heat race, MacLeod got shuffled back to fifth place, after he and another competitor raced for several laps during the first half. In the second heat race, MacLeod got a terrific start and jumped to third on the leader board. Tristin then engaged in a three way race for the third spot. MacLeod would finish the second heat in fifth place. MacLeod focused up, and headed out for the main event. Feeling confident in knowing the track, Tristin set his sights on the front. After the opening lap Tristin was running fourth, behind his teammate Riley Cook in third. Lap three saw mechanical issues put another competitor on the sidelines, thusly moving MacLeod up one spot. As Tristin tracked Cook for the first half of the main event, he showed great poise and patience waiting for his opportunity. Just at the halfway point in the race, MacLeod saw his chance. Heading down into turn one, Tristin got a run on the inside of Cook, out-braked his teammate, and took second spot away. The very next lap Cook attempted the same pass MacLeod had just made. Unfortunately, the two made contact, ending both their days.

Round two on Sunday would see a similar heart break for MacLeod. In qualifying for round two, Tristin improved on his Saturday effort, qualifying his CRG third on the grid. MacLeod continued to gain speed has he worked up to second place early, and stayed there till the checkered flag. At the start of the second heat race, Tristin was shuffled back to third but retook a position with three laps to go to earn him a front row starting spot for the main event. Staying determined as possible, Tristin made the most of his opportunity with the prime starting position. As the green flag flew, Tristin drove around the outside of the polesitter and stole the lead as they came out of turn one. By taking the lead, Trisitn became the only other person on the day to lead in the class TaG Cadet. The lead did not last long though as MacLeod was put back to second the next lap. Tristin stayed in the position, stretching his gap over third place. Just as Tristin could see the second spot on the podium for the second time that weekend, bad luck struck once again. As Tristin flew down the back stretch and sailed off in to turn 11, his kart rolled over a large piece of debris, causing his axle to shift and subsequently ending his day.

“Utah was tough, because we had such good races both days, and kept having bad luck,” said Tristin. “But I really liked the track, and was happy with how we ran before the bad luck.”

Looking to rebound after their rough weekend in Utah, Tristin and his dad set up camp under the CRG-USA tent in Dacono, Colorado at IMI Motorsports Complex for round three for the RMPKC. After seeing a good rise in entries event, Tristin headed to IMI ready for the challenge of racing in a bigger field.

Tristin started the day off in qualifying as the fifth fastest driver in TaG Cadet, placing him middle of the pack. The first heat race ended early for Tristin after fuel pickup issues aboard his CRG ended his race before the halfway mark. Tristin’s second heat race did not go much better after moving up a spot at the start, but falling back on the last lap after dropping a wheel. Despite all the mechanical setbacks that hit MacLeod in the heat races, Tristin was once again ready to get after it, and go for the win in the main event. Starting in the back of the pack, Tristin showed excellent poise and race craft as he moved up from the back to third place. As the finish neared closer and closer, MacLeod engaged in an exciting race for second place. As the checkers waved, Tristin made one last ditch effort as he shot to the inside to try and steal second. The move was unsuccessful as Tristin finished round three with a hard fought, and well earned podium finish in third.

“This was Tristin’s first time on the big track here at IMI, since he used to compete on the kid kart track when he was younger, and I think he did great and am very happy with our run this weekend,” Tristin’s dad Jim said after the podium celebrations at round three.

About Tristin MacLeod:
Tristin is an energetic and excited young kart racer. Now in his fourth year of racing karts, the 10-year-old has relocated to Grand Junction, Colorado to be closer to CRG-USA headquarters and their home track, Grand Junction Motor Speedway. In 2012, Tristin competed in the SKUSA Rocky Mountain ProKart Challenge series and finished third in the TaG Cadet point standings in his first season of regional competition. For 2013, he plans to campaign both the SKUSA Pro Tour and run in his sophomore season of the Rocky Mountain ProKart Challenge. In his off time, Tristin enjoys the outdoor life, camping, and fishing and is also an avid archer.