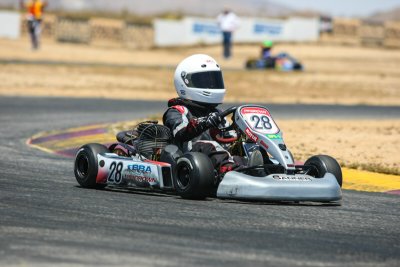 Saturday Series Race #5
Trey Brown paced the Rookie Comer – PKS field to the green for the start of their main event. Brown was on fire from the first practice session and showed no signs of slowing down. Tanner Hudspeth showed good speed through the heat race, but his day ended on lap five in the final. Brown worked his way out to an impressive lead of nearly ten seconds to take the race win. The battle for second place was fantastic as Colin Queen and Aden Dodge went at it early with Hudspeth. Marcus Rodriguez was actually the fastest kart on track, but a poor starting position for the final slowed his progress forward. With a great drive he managed to finish in 2nd place just ahead of Queen.

Spec PRD Sr. by RLV saw Jordan Robertson nab the pole position over Brandon Reed. Reed fought back throughout the racing and managed to run flag to flag for the race win. Robertson finished in 2nd place and well ahead of Gino Alphonso-Macauley.

KPV 2 – Mike Manning Karting KPV 2 saw Joshua Early inch out Colby Dubato for the pole, Dubato bounced back in the prefinal and started the main event from the inside front row. The main event went nothing like the beginning of the day as Jake Drew stormed through the field to capture the win. Dubato’s day ended early, but Joshua Early was right on time for 2nd place. Black Thornell came away in 3rd. 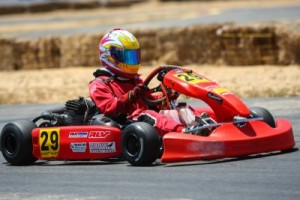 Henderson Karting Experience Kid Kart was exciting from the drop of the green flag. Six of IKF’s youngest pilots took to the challenging Grangé circuit. Rylee Martinez led the opening laps of the contest, but Dominic Gorden took to the point a few laps after the start. The two stayed in contact for the remaining laps with Gorden scoring the race win. Martinez was 2nd and Cameron Easton came home in 3rd.

Trey Brown was at it again in the Fleming Racing Engines KPV 1 event. With the pole and another heat race win under his belt Brown was set for his 2nd win of the day. Brown went two-for-two easily defeating all challengers in the 20 lap final. Julian Busick and Jared Korth fought hard for 2nd place with Busick grabbing the position in the closing laps.

Spec PRD Jr. 2 brought to you by RLV provided the best racing of the weekend. Royal McKee and Christian Brooks were at the top of the charts in the largest class of the weekend. The two veteran pilots rarely disappoint and they were the only two in contention for the win on Saturday. Quick Nick Ramirez wasn’t up to the task of challenging the lead duo for the win and finished 9 seconds back in 3rd. Brooks chased McKee all race long as the two teammates distanced the field. McKee scored the win with Brooks in tow.

The K & P Manufacturing Ironman class ran a different format than the rest of the R7 competitors this weekend. They utilized a two heat and a main race format and also ran the track one direction Saturday and the other direction on Sunday. Joey Barros, rocking the vintage Kodak driving suit was the class of the field, getting it done in the heat races. His speed continued throughout the main event, running unchallenged to the win. Behind Joey, brother Steven was giving it a go along with Tom Rickets and Kyle Gash. Rickets managed to get around both competitor and score the 2nd place finish. Steven Barros ran the quickest lap of the race and finished in 3rd. Gash came away in 4th with Colin Reese grabbing 5th. 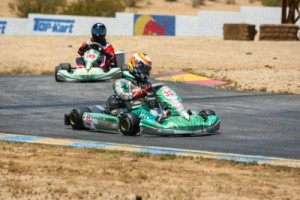 Sunday Series Race #6
Trey Brown and Tanner Hudspeth topped the qualifying charts again in the Grand Products Rookie Comer class, but Marcus Rodriguez led the 7 kart field to the finish of the prefinal. Brown wasted no time in the final, quickly jumping back out to the lead. Rodriguez fell in line for 2nd place as Jared Korth slotted into 3rd. Aden Dodge and Carson Mallett was on the move and climbing up into the hunt. The battle for 2nd place raged as Brown drove off to his 3rd win of the weekend. Dodge turned in a solid drive for 2nd place with Rodriguez ending his run in 3rd.

The RLV Spec PRD Sr. class played out nearly the same as it had on Saturday with Jordan Robertson scoring the pole and Brandon Reed getting the race win. The only change was that Gino Alphonso-Macauley gave Reed a big run for his money. Gino took the fight to Reed, leading eight laps before hitting the halfway mark. Reed patiently waited for his opportunity to pounce. Gino’s day was done on lap 13 and Reed went on to score his 2nd win of the weekend. Robertson again finished in 2nd.

Jake Drew grabbed the pole in the Empire Karts KPV 2 class, but a DNF in the prefinal put him at the rear for the start of the final. It didn’t slow him down though as he crossed the line first ahead of Joshua Early and Colby Dubato. Post checkered flag action awarded the win to Early, with Dubato being elevated up into 2nd place. Third place now went to Blake Thornell.

Rylee Martinez and Chance Gibson topped the charts in Courtney Concepts Kid Kart qualifying. The lead duo led the charge through the prefinal and right into their main event. Martinez was able to draw away in the main event to a 3 second margin of victory. Gibson on the other hand had his hands full of Dominic Gorden, who found a little extra speed in the final. The two went toe to toe for most of the race with a late race move by Gibson earning him 2nd place. Gorden was 3rd, Aden Dodge was 4th and Cameron Easton finished out the fast five.

Trey Brown earned yet another pole position, making it four in two days. The Fleming Racing Engines KPV 1 field didn’t seem to stand a chance at ousting Brown from the top position, but they still gave it a try. Johnny Dressler and Elijah Potter were only a few tenths off in qualifying and tried to put the stones to Brown in the heat race. Brown handled the pressure masterfully, driving home his dominance in the final. Brown once again led every lap and completed his sweep of every class he entered. Dressler and Potter traded positions multiple times in the 20 lap final with Dressler just hanging on at the finish for 2nd place. 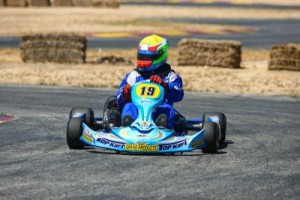 The RLV Spec PRD Jr. class was the most exciting of the day, but this time not necessarily in a good way. Saturday’s winner Royal McKee took a pretty good blow to his head in a crash and was rewarded with a flight to the hospital. He was later released with a concussion, and hopefully we will see him back at Willow Springs for the next event. Christian Brooks picked up the slack for his wounded teammate by scoring the pole, winning the prefinal, and destroying the herd in the 20 lap final. As Brooks drove off to victory, 2nd place was on the line with five drivers all with a realistic chance of earning the position. Owen Lloyd, Jake Drew, Nathan Seegrist, Noah Garza and Nick Ramirez put the hammer down fighting for the runner up spot. Garza finished in 2nd place with Ramirez right behind him for 3rd. Brooks was 14 seconds up the road for the win.

The Hyper Racing Engines Ironman class once again ran two heats and a main event. This time they ran the Grangé track in the normal clockwise direction, and opposite of every other class. The Barros brothers were at it again for day two with Steven getting the better of Joey and Tom Rickets in heat #1. Joey bounced back in heat #2 scoring the win by only a few tenths over Steven. Rickets again finished in third place but he as not quite up to the pace of the team Barros duo. Just like the civil war, it was brother vs. brother in the final. Steven got the jump off the start and led heading into turn one. Joey slotted in behind with Rickets, Kyle Gash, and Jeremy Specht in tow. Joey attacked late in the race but Steven was able to counter with a move of his own. It was a drag race coming off the last corner with Steven edging out Joey for the win. Gash brought his #819 home for 3rd place.

Special thanks to this weekend’s associate sponsors P1 Engines and Tru Tech. The next round of the Motul IKF Region 7 Championship Series will be June 21-23 at Willow Springs Kart Track in Rosamond, Ca. For everything Region 7 please check out http://www.ikfkarting-r7.com